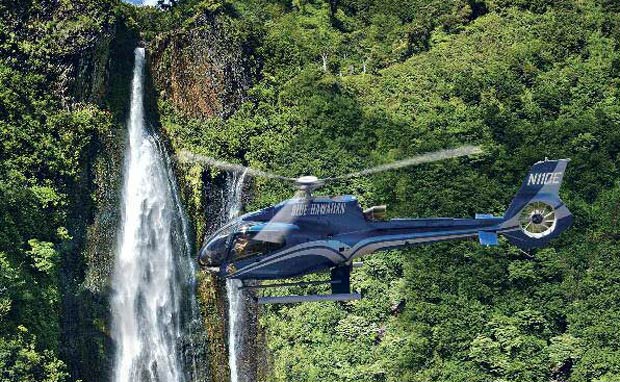 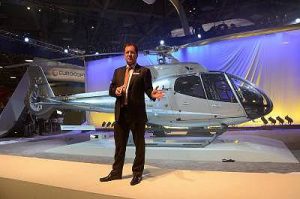 The Eurocopter EC130 T2 was revealed during a ceremony at the 2012 Heli-Expo exhibition in Dallas, Texas, where Eurocopter also announced seven launch customers for the rotary-wing aircraft covering a total of 105 bookings: Maverick Helicopters, Papillon Helicopters, Blue Hawaiian Helicopters, Scandinavian Helicopter Group, Air Commander, Europavia and Enloe FlightCare. The diversity of operations performed by these clients underscores the Eurocopter EC130 T2’s ability to excel in a broad range of missions – from aerial tourism and utility to emergency medical airlift.

“The EC130 T2 is the latest step in Eurocopter’s strategy to expand and evolve our helicopter lineup. The high number of orders is proof that Eurocopter innovation is perfectly aligned with customers’ requirements and the evolution of their operations,” said Eurocopter President & CEO Lutz Bertling. “The EC130 T2 has literally been ‘love at first flight’ for our customers. We are fully committed to begin deliveries of the new EC130 version in 2012.”

While retaining the EC130’s existing external lines, approximately 70 percent of the Eurocopter EC130 T2 airframe structure has been modified. New and updated features on the helicopter include the use of a more powerful Arriel 2D turboshaft engine and upgraded main gearbox; the incorporation of an active vibration control system; improved air ventilation, distribution and demisting systems; a cabin interior structure redesign with a full flat floor; a cockpit update for enhanced man-machine interface; new energy-absorbing seats that improve weight and balance for passenger loading; integration of a crashworthy fuel tank; and increased maintenance accessibility for electrical and air conditioning systems.

The Eurocopter EC130 T2 can carry 1 pilot and up to 6 passengers in high-tech comfort with facing-forward energyabsorbing seats. A large sliding door and long boarding steps on both sides allow an easy cabin access.

The increased performance from the Eurocopter EC130 T2 is provided by its Turbomeca Arriel 2D engine, which provides 10 percent more average power than the EC130’s current powerplant with lower specific fuel consumption. Based on the proven Arriel 2 engine family, the Arriel 2D benefits from such technology advancements as a new axial compressor and new blade materials, and also provides a higher time between overhaul (TBO) intervals. The Arriel 2D is used at its full-power rating of 952 shp. on the Eurocopter EC130 T2, and is the same engine that equips Eurocopter’s evolved AS350 B3e helicopter in a de-rated version. 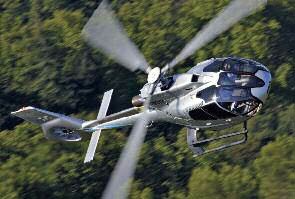 The Eurocopter EC130 T2, with its Fenestron® tail rotor, is one of the quietest helicopters in the skies, setting the standard for tour operations worldwide. Its very low sound level is 7 dB below the ICAO requirement and remains quieter than the most restrictive limits defined by the Grand Canyon National Park. The only sound you will hear will be the sigh of wonderment from passengers enjoying the spectacular view offered by the large windows. The wide, unobstructed cabin with all forwardfacing seats can accommodate 1 pilot and up to 7 passengers and provides an outstanding visibility. The Eurocopter EC130 T2 incorporates all the latest state-of-the-art technologies, materials, systems and avionics. This new generation aircraft benefits from the proven experience of the Ecureuil family, resulting in an exceptional availability rate. In the open space cabin, passengers can enjoy the spectacular view and are comfortably seated on a raised “theatre-style” platform in the rear. The forward-facing, energy absorbing seats provide passengers with ample legroom. The low internal sound level and the efficient air conditioning system contribute to making the journey unforgettable.

Performance improvements for the Eurocopter EC130 T2 include a higher maximum gross takeoff weight (2,500 kg. for internal loads and 3,050 kg. when external loads are carried) and a speed increase of up to 10 kts. Even with these enhancements, the Eurocopter EC130 T2 external sound level remains within the rules for flights at America’s Grand Canyon National Park – an important factor for tour operators.

Future development for the Eurocopter EC130 T2 includes the integration of a new glass cockpit design utilizing dual-screen electronic flight displays matched to a Garmin GPS/NAV/COMM receiver (currently GNS series to be expanded to GTN series). This advanced glass cockpit solution will be available as well for the AS350 B3e helicopter and will be developed through the American Eurocopter subsidiary in the United States and installed with a supplemental type certificate (STC). Both versions will be on display at Eurocopter’s Heli-Expo booth #1917.

Also planned for future development on the Eurocopter EC130 T2 is a 1,500 kg. cargo swing for an aerial work/utility configuration, and the availability of Eurocopter’s Stylence interior – which merges ergonomics and advanced technology in a refined cabin finishing that offers the environment of a fully-equipped in-flight office for business executives and companies. The no. 1 Eurocopter EC130 T2 has logged 90 flight hours since its first flight in 2011, demonstrating excellent maturity of the new configuration for a certification scheduled this summer. Final assembly of the initial series production aircraft began last December at Eurocopter’s Marignane, France facility.

By the second half of 2012, production will transition completely to the Europcopter EC130 T2 version.