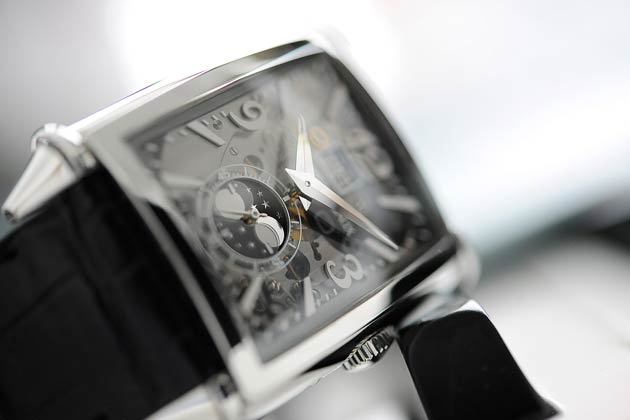 For the first time ever, the mechanical heart of the Girard-Perregaux Vintage 1945 Large Date, Moon-Phases watch is revealed under a transparent sapphire dial. In a deft combination of technology and style, this model is enhanced by its Art Deco-inspired aesthetic code and its uncompromisingly contemporary mechanical structure. 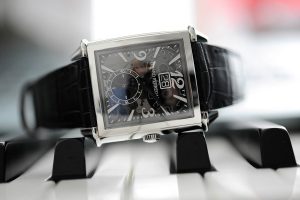 The new Girard-Perregaux Vintage 1945 Large Date, Moon-Phases watch fully reveals the complexity of its movement for the first time, thanks to a transparent dial carved in sapphire. This offers the wearer a fascinating mechanical spectacle of gears, display disks, screws, levers and wheels, all arranged in a perfectly-orchestrated system. Here, the movement goes beyond its merely functional role to become a full-time spectacle. Testifying to the Manufacture’s long history and expertise, it unveils all the secrets that give it its beauty and originality. Its shape, adapted to that of the case, represents a distinctive, emblematic mark of identity. Its large jumping date and moon-phase functions complement its hour, minute and small second indications to complete its unique cachet. A fine example of kinetic art, the Girard-Perregaux Vintage 1945 Large Date, Moon-Phases watch is marked out by its strong character and elegant sense of style.

A case of architectural proportions 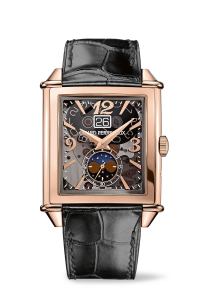 With its mechanical beating heart, the Girard-Perregaux Vintage 1945 Large Date, Moon-Phases watch accentuates an impression of depth combined with multiple contrasts. Like a metal and glass cathedral, it is a vivid example of the spirit of contemporary architecture, in which spaces and volumes are intermingled to form subtly coordinated interplays of transparent structures. With its mysterious smoked-glass effect, the dial both reveals the watch mechanism and showcases the hour markers and applique Arabic numerals to ensure clear and rapid reading of the indications. Its gray colouring is obtained by surface metallization, while the seconds circle and the inscriptions have been created through printing. The Dauphine-type hands, embossed and polished, stand out just as clearly, while continuing to allow the heart of the watch mechanism to be seen.

Designed in the purest Art Deco style, the rectangular “1945” case (named for the year of its creation) forms part of the repertoire of iconic Girard-Perregaux classics. Its profile, doubly curved both length-wise and width-wise, forms a combination of harmonious lines of convergence and gentle curves. The shape of the lugs, the presence of horizontal gadroons and the merging of the crown into the case-band further underline the watch’s elegance. Recognized and appreciated by connoisseurs for this aesthetic perfection, it also provides the wearer with a very high degree of comfort.

A mechanical spectacle
The dimensions of the Girard-Perregaux 03300-0105/0062 manufactured caliber exactly match those of the case, which is highly unusual for watches with distinctive shapes.

The technical sophistication of the Girard-Perregaux Vintage 1945 Large Date, Moon-Phases watch is now clearly on display to one and all. Among the first features to be noticed is the large jumping date at 12 o’clock, displayed by a tandem of two adjacent disks. 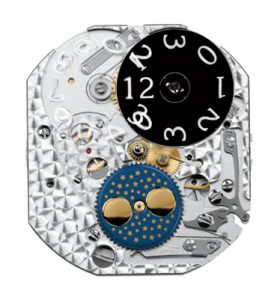 In terms of technical performance, this patented mechanism impresses by the rapidity of its operation: a date change is completed in under 5 milliseconds when triggered! It is also noteworthy for its display on the same level, achieved thanks to an ingenious mechanism. The transparent disk bearing the numerals indicating the units, placed on top and with a minimum thickness of 0.1 mm, has its numerals inscribed on its back, contrary to usual practice. The level difference is thus imperceptible in relation to the black disk positioned underneath that bears the numerals indicating the tens. The two numerals thus give the appearance of being displayed naturally side by side, without any line of demarcation.

Following conventional lines and yet imbued with a strong poetic element, the moon-phase indicator at 6 o’clock both provides visual balance and adds a colourful note. Operating on the same axis as the small seconds hand, this function also has a discreetly concealed technical profile, marked particularly by the presence of two moon symbols that appear alternately on the micro-dial. Its indented perimeter and the heart that usually covers the lower part of the disk are thus converted into almost theatrical features.

Wound automatically by an oscillating weight visible on the case-back side, the caliber is very easy to set. The large jumping date in particular can be rapidly set through the crown, while the moon-phases are controlled by a side corrector discreetly merged into the case-band. Equipped with a minimum 46-hour power-reserve, its frequency is fixed at 4Hz, or 28,800 vibrations per hour.

The Girard-Perregaux Vintage 1945 Large Date, Moon-Phases watch is available in either a stainless steel or pink gold version.