Over the years Palazzo Positano has been chosen, by Armani, Justin Timberlake, Jessica Biel, Madonna, Alice Kiss and attracting celebrities, business leaders and aristocrats from across North America and Europe as a holiday hideaway.

History of the Palazzo Positano 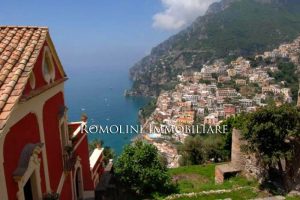 Standing on a rock directly above Positano’s bay, built as an Episcopal residence  around 1680 and, in 1716, during the baroque age,  enriched by particular and precious objects from the middle-east and other country of the world. The Palazzo Positano is still storing this human heritage among the painted ceiling, the lacquered doors, the inlaid-wood furniture, the stucco-works and the ancient laces hand-made by the master craftsman of that time; it never lost his magnificence, even when the world wars brought to Positano privation and poverty, it preserved its luxury, surrounded with breathtaking landscape that made, and still make,  Positano a natural miracle.

Since the beginning of the year ‘900, day by day, Positano became the alcove of artists and literary men, maybe arrived the first time only by mistake, but so inspired by the place to come back again and again and again? The same happened to Edward Ghillausen, a Bauhaus member , who, being a a Jewish, had to escape to Italy finding refuge in Rome.In the “Eternal City” he met and fell in love with Eva Maria Vivaldi and together they decided to live the rest of their life in the ” Heaven on Earth”: Positano. 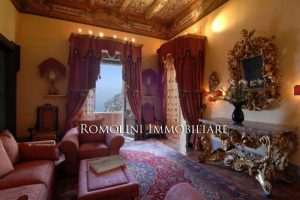 Until the year 2000, Mr Ghillausen and Mrs Vivaldi, nearly hundred years old, impregnated  the Palazzo Positano with their culture and that of their illustrious guests: the Neapolitan Caprile, the German Richard Oelze, Picasso, Carr?, Siegfried Kracauer, John Steinbeck, Corrado Alvaro, Dino Buzzati, Alberto Moravia. Armin Wegner, Martin Wolf and the Russian painter Ivan Zagaruiko were their friends, too. Each of them left in the Palazzo Positano a bit of their souls? a piece of their hearts.

Today’s owners, an artist and an antique dealer, were Ghillausen’s guests. During their visit at the palace they both could feel the magic power of the place. They wanted to preserve it and today they share, with few privileged guests, the never ending moments of peace and joy that fill up heart and soul, stopping the time and watching, like in a silent film, at the panorama and at the life of a land more singular than rare.

Description of the Palazzo Positano 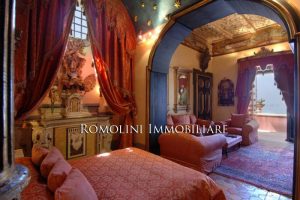 The villa is visible from the approach of the Amalfi Drive, sitting as it does above the village of Positano and blessed with a position that ensures it is bathed by the first as well as the last light of the day. Through a series of walkways and characteristic shallow stairs , coming across gardens scented with the flowering citrus fruit trees, we reach Palazzo Positano, that, with its handsome and elegantly formal fa?ade, faces the receding landscape of the Amalfi coast to the west.

The main entrances to the Villa are two:
the upper gate opens into the garden and, from there, to the central double staircase;
the second gate  gives access to the large terrace furnished as living/dining room  that links, through three doors facing it, kitchen, living/dining room and  staircase.

The professional kitchen is a complex and well articulated space where technological elements harmonize with the stones of  the arches and of the monumental fireplace, with the majolicas and the marble sink, the copper pans and the bread and pizza ovens, the large baroque cupboard overhanging the space available to eat also in the kitchen. The living/dining-room, constituted of two rooms, hosts the antique Tuscan walnut table with monumental chairs and comfortable modern armchairs, the bookcase with a collection of antique books, the Neapolitan Rococ? mirror and a collection of antique paintings among which, those representing episodes of Alessandro Magno?s life stand out. The SPA is set on the lower ground floor and hosts the hydro-massage indoor pool equipped with the upstream-swim system  and  tiled with  local majolica tiles .

The antique Calidarium and Frigidarium  have been replaced with the modern Sauna and Turkish bath, Three spa showers, Weight training , Sitting room with plasma Satellite TV, massage/ relax area  with access to the outside terrace with  sunning deck and hydro-massage bath tub.

The first floor hosts  two magnificent suites with original coffered  ceilings and wall frescoes .
Coming up, on the right we find the first suite, dedicated to Alfonso d’Aragona, that, thanks to the imposing console with mirror, the numerous paintings (of the Lepanto battle, of the Circe enchantress) and the columns adorning the bed, is connoted by a 16th century imprint.

The second suite, on the left, is dedicated to Isabella, Alfonso’s wife and characterized by a strongly spiritual furnishing with the presence of a privileged altar and paintings depicting mainly sacred scenes. Reaching the second floor we find the two junior suites, characterized by the sloping wooden beamed ceilings, sober furnishing only sometimes enriched by  pieces of antiques.The central imposing staircase with old stone steps, decorates with polychrome stuccos, niches with statues and vases, harmonizes  and links the various internal and external spaces of the villa and represents an antiques art gallery.