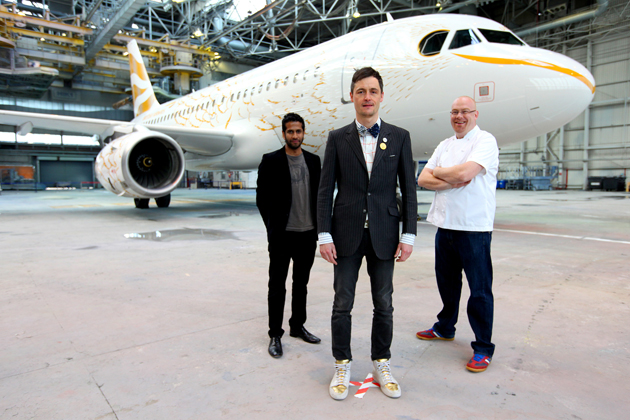 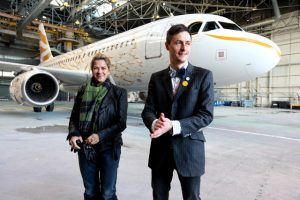 They were joined by a roll call of stars including; Gemma Arterton, Danielle Lineker, Mr Hudson, Daisy Lowe, Chef Jocky and Team GB hopefuls – Aaron Cook (taekwondo), Mark Hunter and Zac Purchase (rowing). Guests were able to sample Heston and Simon Hulstone’s Olympic inspired dishes as well as view the Olympic-inspired film and ‘Dove’ artwork, while music was provided by DJ and model Daisy Lowe. The event marked the official unveiling of the works of the BA Great Britons programme, celebrating the best in British talent in the run up to the London 2012 Olympic and Paralympic Games. The works will be showcased at the three-in-one art gallery, cinema and dining room from April 4 to 17, and will be rolled out on flights to millions of customers from today onwards.

The BA Great Britons programme was launched last year to find rising British stars in food, film and art and provide them with career defining opportunities and a global platform to showcase their work in the run up to the Games. ‘Flight BA2012’ includes artwork from artist-designer Pascal Anson from Brighton, who was mentored by Tracey Emin on his ‘Dove’ design for a range of celebratory aircraft, displayed in the gallery. It also features short film ‘BOY’ starring Timothy Spall, written by screenwriter Prasanna Purwanarajah under the mentorship of Richard E Grant, screened in the cinema. Guests are also able to sample a bold British menu created by Michelin-star chef Simon Hulstone, who has produced an Olympic Games inspired menu under the guidance of Heston Blumenthal.

Frank van der Post, British Airways managing director of brands and customer experience, said: “We wanted to bring the flying experience to the public, allowing guests to preview our in-flight entertainment, celebratory aircraft livery and on-board menus in anticipation of the London 2012 Games. This is going to be an exciting year for the capital and this is just the very start of our take-off!”