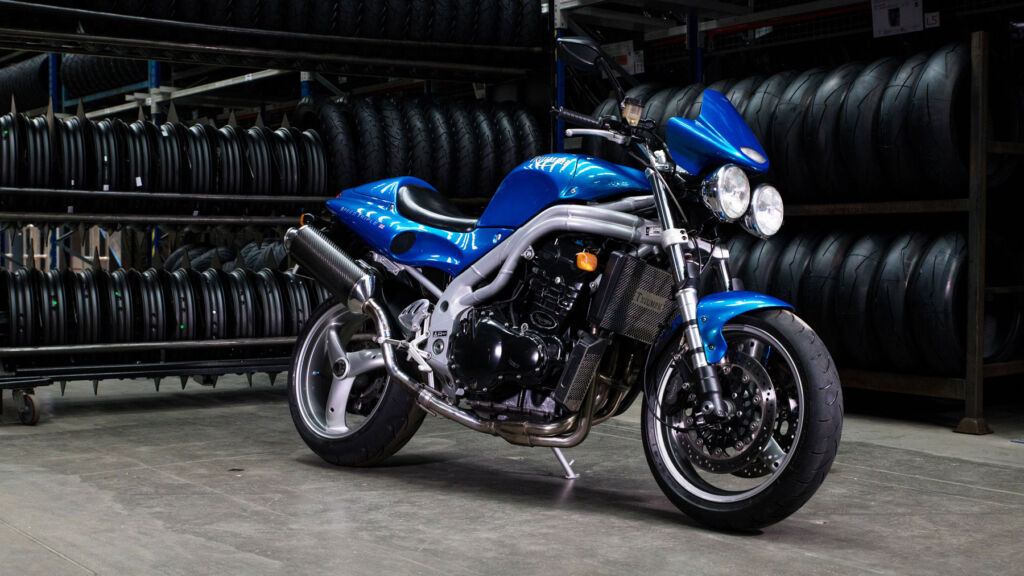 Triumph launched the Speed Triple 1200 RS in 2021, creating a buzz around the Motorcycle Industry and particularly Motorcyclists. Luxurious Magazine’s resident bike tester, Jeremy Webb, has an affinity to Triumph and grabbed his opportunity to put one to the test.

I headed off to meet up with some Bikers near Guildford, full of enthusiasm even though wet and windy conditions are not ideal for testing any motorcycle, let alone one of the newest Triumph models. But I couldn’t wait to jump on the Speed Triple 1200 RS and give it a blast around east Surrey, purely for the benefit of you, the reader.

The Triumph Speed Triple 1200 RS is new in every sense, with the Midlands-based company designing it from the ground up. They aimed to produce the best performing and handling Triple ever, utilising the latest technology, causing a storm in the naked sports bike category. 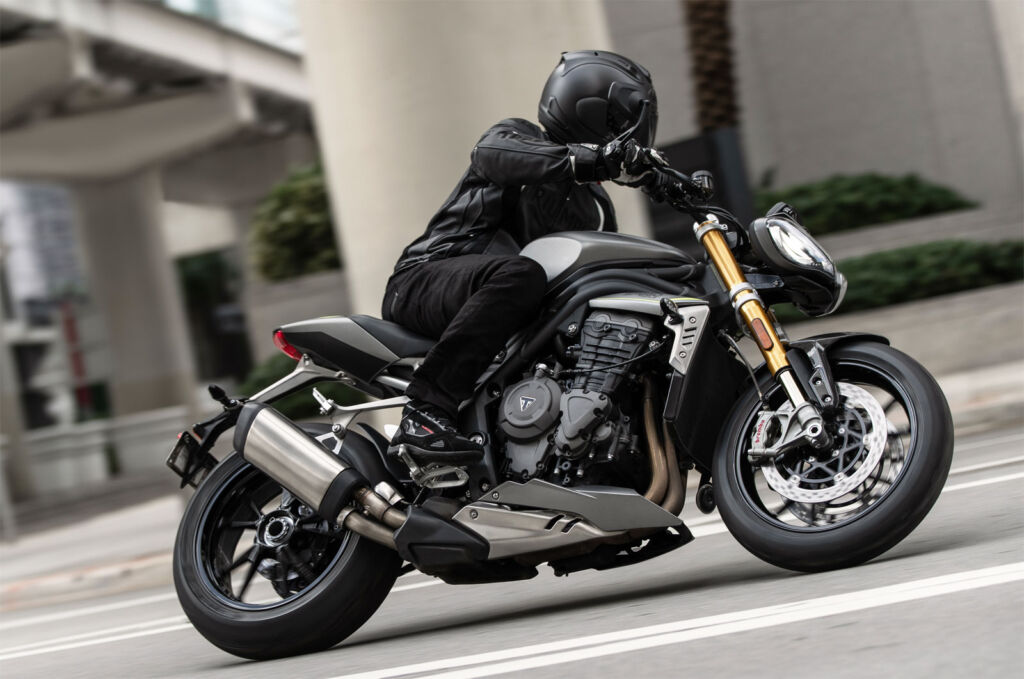 Triumph has some impressive figures with their Speed Triple 1200 RS, which has a new higher capacity 1160cc triple engine. The company state it is the most powerful and fastest-accelerating Speed Triple ever. Power is up by 30PS to 180PS, and so is the torque at 125Nm, an increase of 8Nm. The bike is 10Kg lighter, weighing in at 198Kg, allowing improved precision, handling and agility. This is beneficial when riding on the road and even more so when on a track. 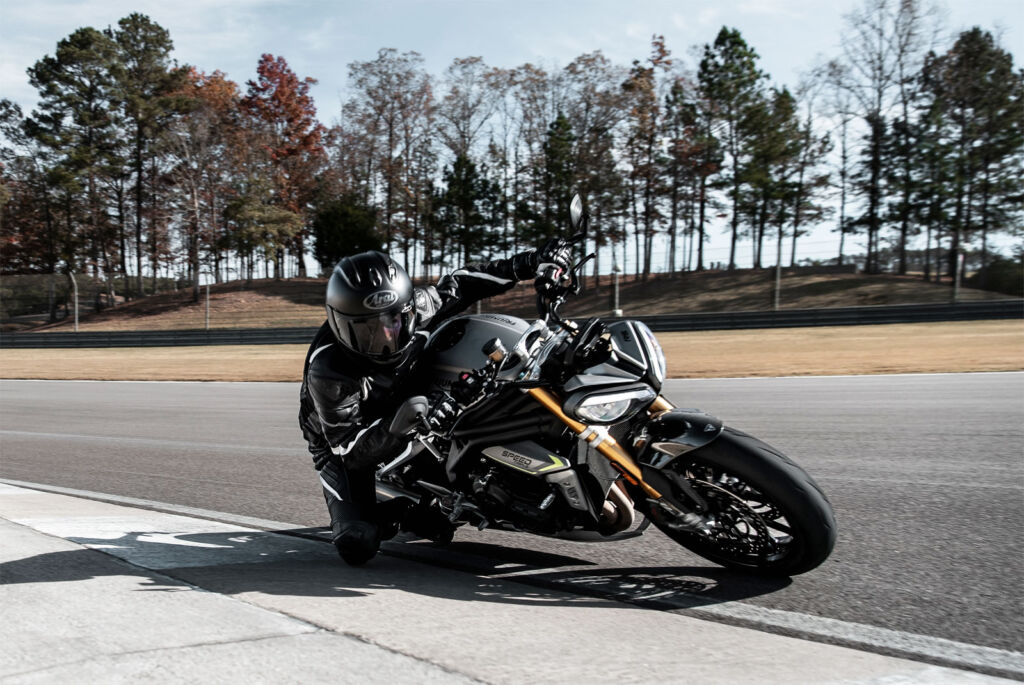 You will enjoy the confidence these bring to your riding. I can vouch for how good these systems are, as the roads I rode on during the time I had the bike were greasy and cold, yet the machine never stepped out of line even when pushed hard and fast.

Comfort on a Naked Sports machine is often hard to achieve as you are buffeted by wind, splashed by rain and lent forward looking like you are performing a Yoga move. But Triumph has addressed some of these issues by providing the rider with 13mm wider handlebars, allowing you to sit more upright, taking pressure off your back and neck. 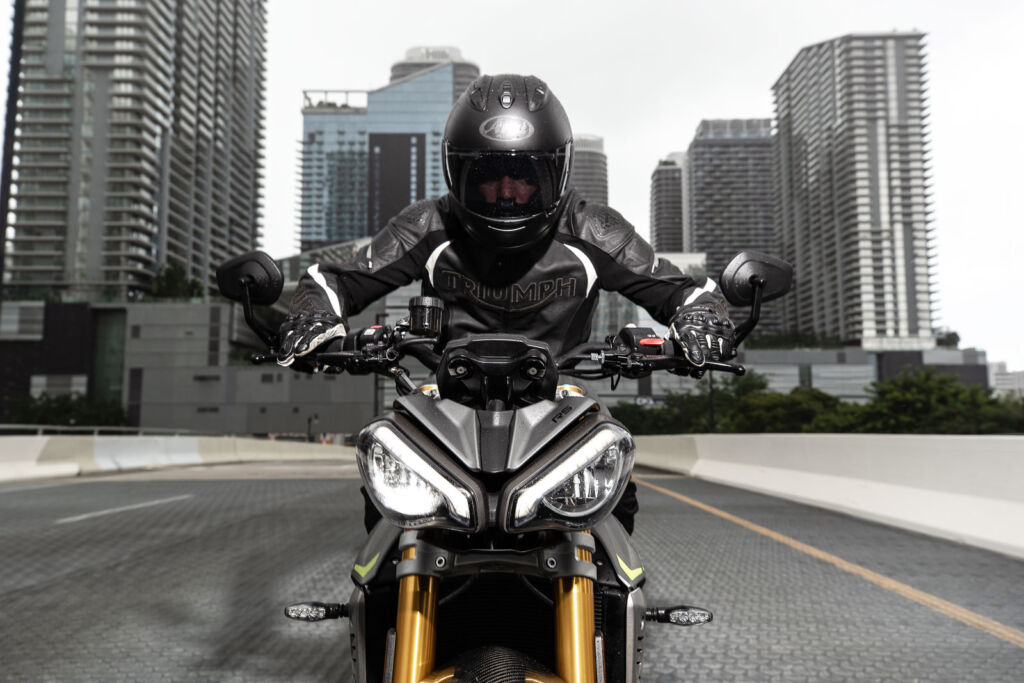 I found the riding position fine, and even after several hours on the bike, I didn’t feel that I needed a Chiropractor. Neither did I require padding for my posterior as the saddle is supportive. Triumph has also altered the footpeg position and seat height, so your knees are not scrunched up, and you can move to a tucked position when riding faster.

Moving onto integrated technology on the Speed Triple 1200 RS, it has a brand new 5″ TFT instruments display that puts you in control of Riding Modes, Traction control, Navigation, and much more. All these adjustments can be made while riding by engaging the switch controls on the handlebars. 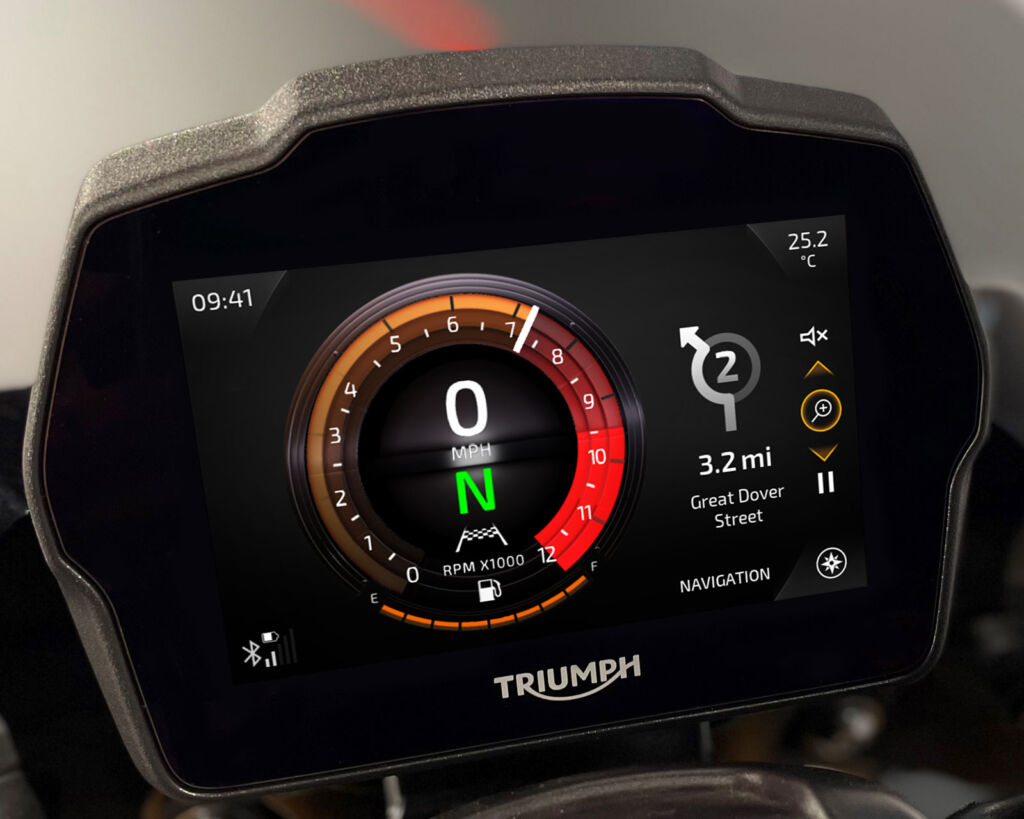 The screen layout is available in two different themes, which change the display’s colour scheme, and the new optically bonded 5-inch screen guarantees less reflection and therefore improves the image clarity in any lighting condition. The super clear display provides crucial information for the rider, who will instantly know their speed, gear and revs.

Five riding modes are featured on the Speed Triple 1200 RS. These are Rain, Road, Sport, Track and Rider. Each adjusts the bike’s behaviour to suit the intended use through the ride-by-wire throttle system. The throttle response is adjusted according to the selected riding mode, traction control, and ABS settings.

The new highly angular lighting system on the Speed Triple 1200 RS has LED headlights with an incredibly distinctive daytime running light design. These produce a brighter whiter for greater visibility for you and other road users, as you want to be seen as much as you want to see ahead. 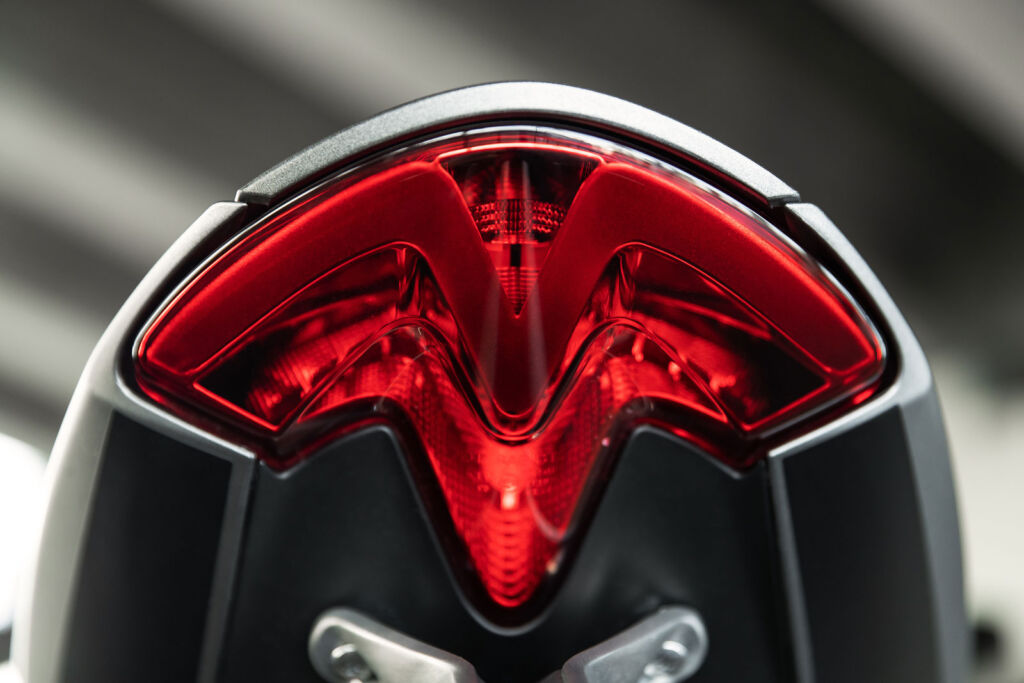 The tail light is gorgeous with a distinctive design (see image). It is redesigned with a unique brand LED design.

Another first for the Speed Triple 1200 RS and Triumph is the full keyless system, including keyless ignition, steering lock, and new keyless fuel filler cap. Triumph has also augmented the switch cubes with an increased amber glow from LEDs inside the switches. It is a huge benefit when riding at night as they are much easier to locate. 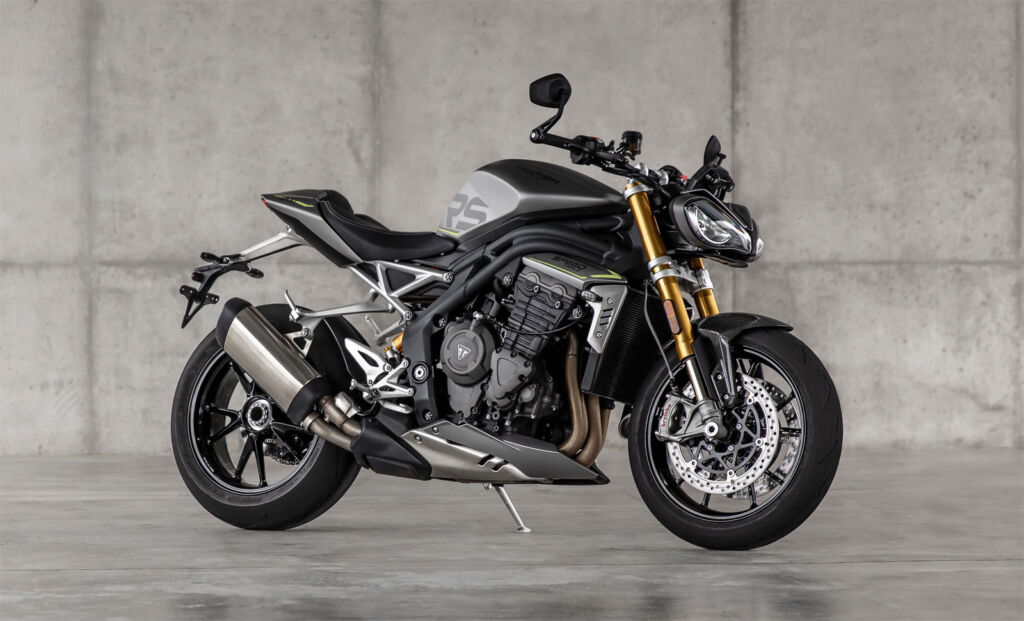 Triumph has met its aims and produced an outstanding sports bike that delivers in all areas. The power and handling of the Speed Triple 1200 RS will give you as much riding fun as you can wish for, with confidence. The price reflects the technology and improvements put into the bike, and you get a lot for your outlay.

Price, service and warranty
The new Speed Triple 1200 RS is priced at £15,100.
The overall cost of ownership is reduced, thanks to the high 10,000 miles service interval and the two-year unlimited mileage warranty.

The new Speed Triple 1200 RS will be arriving at Triumph dealers from the end of February 2022.

To find out more about Triumph motorcycles, please visit www.triumphmotorcycles.co.uk.