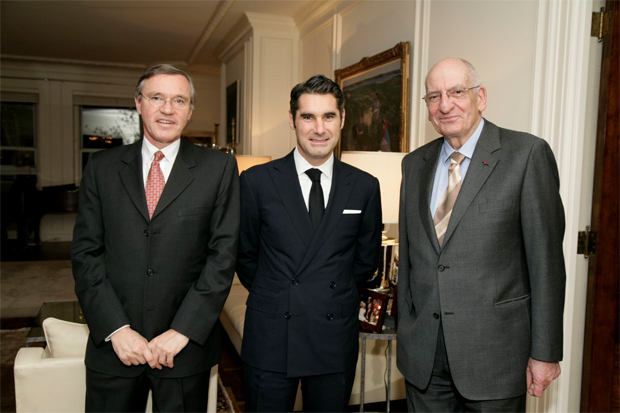 Vacheron Constantin, the world’s oldest continuous watch manufacturer for more than 255 years, hosted the inaugural cocktail for “ThinkSwiss: Genève Meets New York.”  The week-long festival, in honor of the 300th birthday of Geneva-born Jean-Jacques Rousseau, consists of more than 10 events that explore the remarkable impact of the Geneva spirit, embodied in the Enlightened works of Rousseau.

Hugues de Pins, president of Vacheron Constantin North America, and Ambassador François Barras of the Consul General of Switzerland in New York, co-hosted the event at the private residence of Ambassador Barras.  Among the guests were Mr. Pascal Couchepin, former President of the Swiss Confederation, Mr. Beat Reinhardt, president of the Swiss Society of New York, key speakers from the ThinkSwiss week, friends and clients.

In his welcome speech, Hugues de Pins elaborated on the partnership.  “Vacheron Constantin is proud to support this festival celebrating these ideas born in Geneva during the age of the Enlightenment as our company’s founding, which continue to have such relevance both in New York and around the world,” said Mr. de Pins.

In perfect harmony with the beautiful penthouse on Manhattan’s Upper East Side, a selection of Vacheron Constantin timepieces were on display within the home. 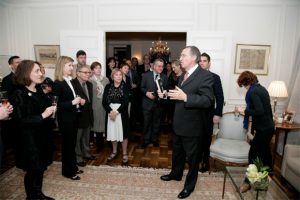 Guests were drawn to the magnificent pieces from the 2009 Métiers d’Art “Les Masques” collection, on display in tribute to author Michel Butor, whose poems appear on the watch dials and who is being honored at the Gallatin School during the week for his lifetime achievements.  The newest Métiers d’Art collection, “Les Univers Infinis”, whose dials are inspired by the Dutch artist M.C. Escher, also attracted attention.  Other new models, including the Patrimony Traditionelle 14-day Tourbillon and the 100th Year Anniversary Malte in platinum drew great admiration from guests.

About ThinkSwiss: Genève Meets New York:
ThinkSwiss:  Genève Meets New York is a week-long festival taking place in New York City, March 6-12, 2012.  The Consolate Generral of Switzerland in New York and the City of Geneva will present more than 10 events at various venues throughout Manhattan, highlighting ideas born in Geneva that continue to reverberate far beyond its borders.  To find out more information about the schedule of events, please visit www.thinkswissny.org.

How to Grow Your Own Wedding Bouquet and Flower Arrangements