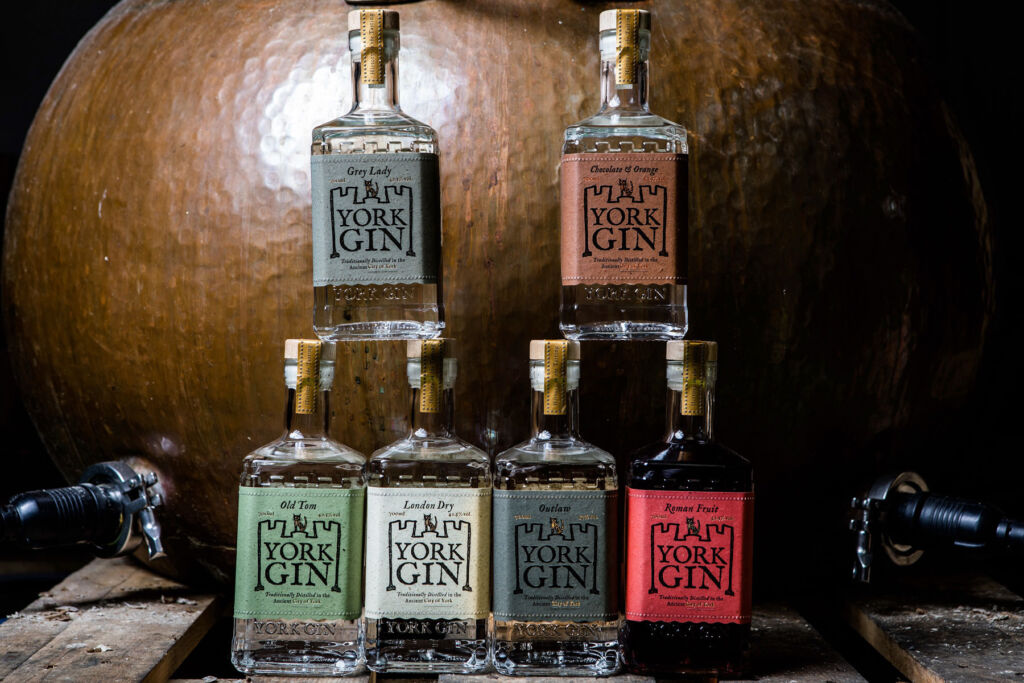 In the heart of the cathedral city of York, a distillery is producing Artisan gins that allow you to taste history. York Gin, established in 2018, is now receiving many plaudits for its creative flavoured spirit. Jeremy took on the task of sampling six gins the company distils.

In 2018 a group of friends (including one of York’s most well-known pub landlords) decided the city should have a Gin named in its honour. The founders didn’t want to create just another Gin, so they chose to use York’s long history to develop flavoured Gins, and this formed their motto, ‘History in the Tasting’.

The founders were also clear that the brand would be as sustainable as possible, having as light an impact on this planet as they could.

Having visited the York Christmas Market, my sister was full of praise for the range of gins produced by this very new company formed in 2018 by a group of friends.

After approaching the company, I was lucky enough to receive the Tasting Collection of six York Gin minis, all vegan and Gluten-free.

In an age where style is often replaced by substance, it was refreshing to see a label with immediate clarity—identifying where the gin was produced and the flavour. 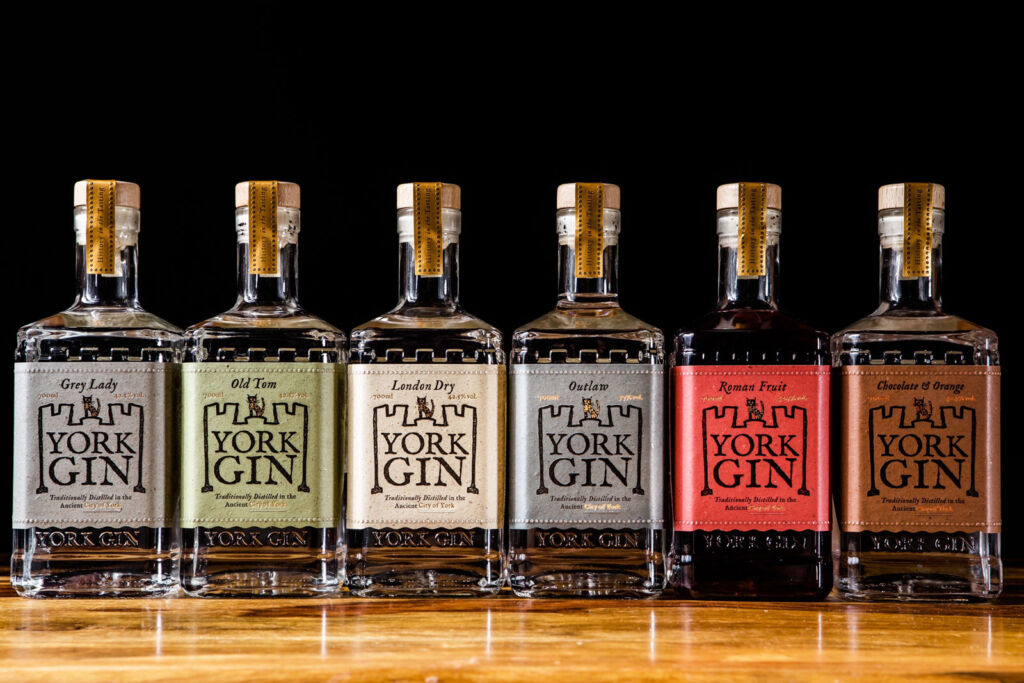 The York Gin logo embraces the history of the city, combining an outline of both the city walls with that of the York Gin cat, which is inspired by a cat called ‘Rutterkin’ who attended and obeyed the Bottesford Witches.

In the years since York’s only distillery was created, they have won many silver and gold medals at the world’s biggest spirits competitions, and experts have said they make some of the world’s best gin using the traditional method of vapour infusion in a copper still.

The pure alcohol is produced by heating Yorkshire grain in a copper still to produce a vapour that passes through a large basket of carefully chosen botanicals, which must include juniper berries. The alcohol then takes on its flavours and condenses again into liquid form. The highest quality liquid from the vapour infusion is then mixed with Yorkshire water until the gin is the correct strength. 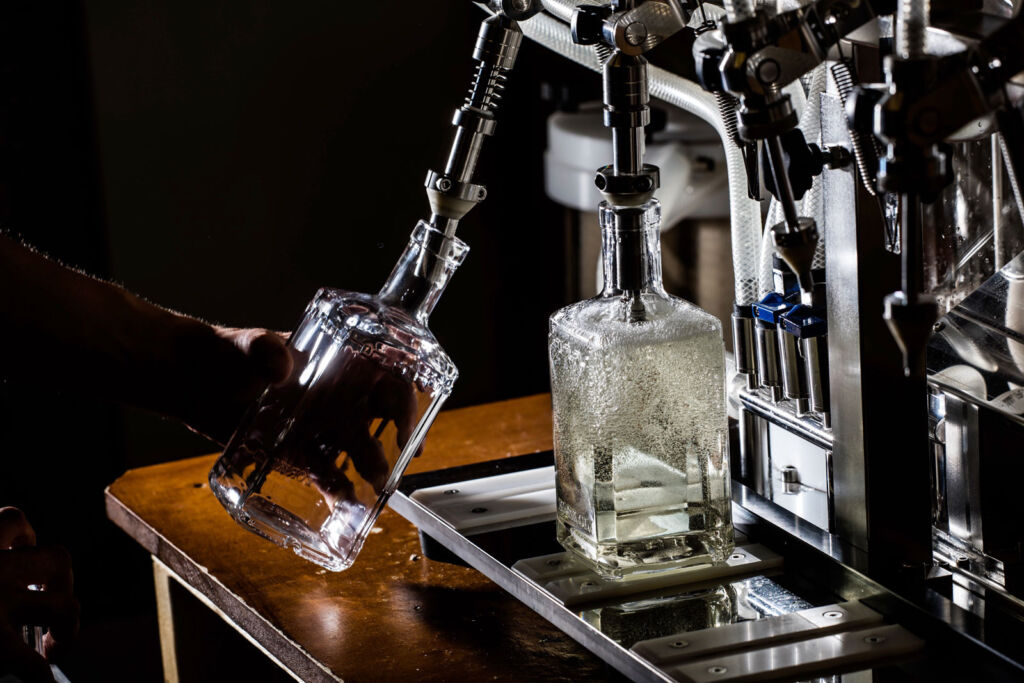 The first gin they produced, London Dry, uses nine historic botanicals to create what the company calls a ‘go-to gin that defies fashions and fads’.

Roman Fruit is a juniper-led dry gin with no added sugar infused with fruits and flowers associated with Ancient Rome, including strawberries, raspberries, apples and hibiscus.

Outlaw Navy Strength is 57% and pays homage to the city’s villains, including Guy Fawkes and Dick Turpin.

Old Tom is a Victorian-style dry gin very slightly sweetened with a herb-infused sugar syrup made in Yorkshire.

The Chocolate and Orange flavour gin are inspired by the history of Terry’s Chocolate Factory, which invented the Orange shaped sweet in the city in 1932. You get the full, rich chocolate notes and a zesty orange twist.

Using Fever-Tree tonics, I decided to hold a home tasting session with the samples. It was clear that The London Dry and Outlaw Navy strength needed just an Indian Tonic; however, some of the ladies thought it combined well with the Cucumber Tonic.

The Roman Fruit was delicious when served with Elderflower Tonic and Rhubarb and Raspberry Tonic; this was my niece’s favourite and her first foray into the world of gin, although the Chocolate and Orange, when paired with the Light Clementine, was a close second.

The York Gin distillery is powered by 100% green energy; their vehicles are both emission-free and electric, and bottles, labels, and packaging are plastic-free and made in Yorkshire. They also buy local, recycle and encourage customers to re-use their empty bottles to produce other items. 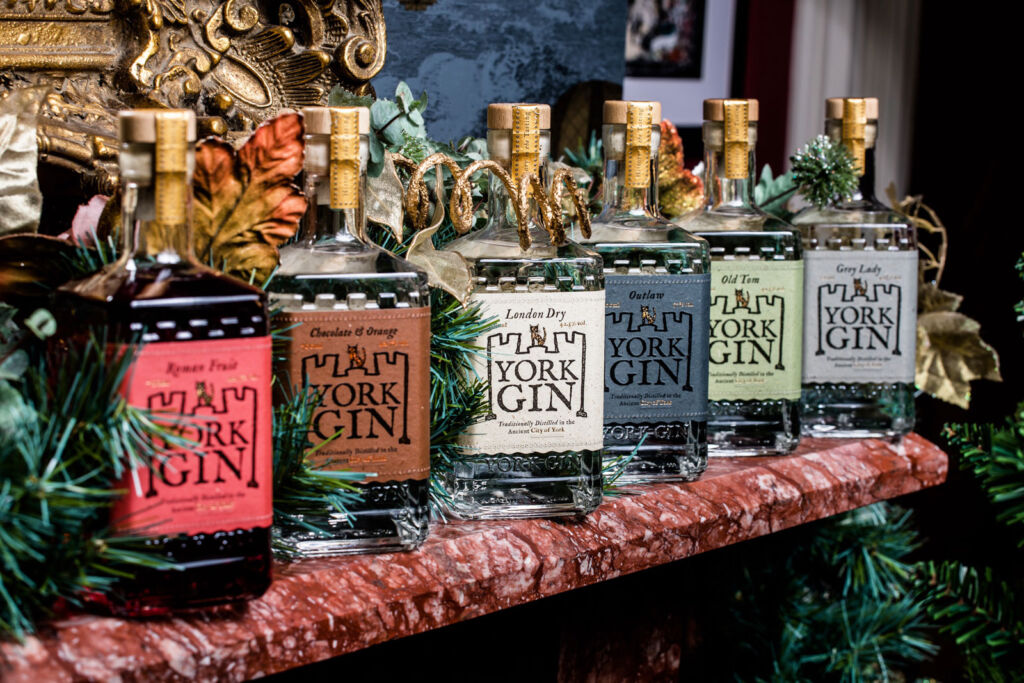 As well as being committed to taking care of the environment, they believe in looking after their employees, supporting local charities and community groups.

The popularity of gin has increased considerably from 33 million bottles in 2013 to 83 million in 2019; this is set to continue with over three hundred gin makers in the Country compared to just thirty-seven in 2010. York Gin aims to capture some of this booming market.

With so much choice across a broad price range, Yorkshire Gin is not priced at the lower end but is worth buying if you wish to enjoy a premium gin and support a company that I would describe as ‘History in the Making’.

York Gin – Where and How?

Read more news from the spirits industry and features here.