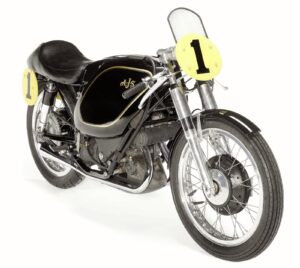 This 1954 AJS E95 Porcupine is just one of just four E95s completed by the AJS factory, the ajs e95 porcupine (so nicknamed because of the spiked cooling fins on its cylinder head) was created as a works racer by British manufacturer AJS and is perhaps one of the most legendary motorcycles in history owing to its brief, sunburst racing success and extreme rarity. Bonhams will be auctioning this immensely rare motorcycle at its automotive sale at Carmel in August.

“As far as motorcycles go, the AJS E95 Porcupine is at the very top,” says Bonhams CEO Malcolm Barber. “It is arguably the most beautiful, graceful and innovative racing motorcycle ever built”

Because the extreme rarity of the ajs e95 porcupine, each machine is well documented with all 1954 models being accounted for (most earlier AJS E95 Porcupines were scrapped by the factory). Until recently, this particular example had been on display for more than two decades, occupying pride of place at the world-famous National Motorcycle Museum in England, its motor having been overhauled by Team Obsolete Equippe. Its estimated that the AJS E95 will achieve $750,000 at auction. Now in its 14th year, the Bonhams automotive sale at Quail Lodge is the longest running auction during the most famous collector car event in the world – Pebble Beach Car Week. Held in conjunction with the prestigious The Quail: A Motorsports Gathering, Bonhams is proud to introduce motorcycles to its successful two-day auction format and is now accepting highly select consignments, strictly limited to 50 of the finest and most iconic machines, to go alongside the AJS E95 Porcupine. Incidentally, it was an AJS E95 that won First in Class at the 2009 Pebble Beach Concours d’Elegance, the first year motorcycles were ever admitted.

While statistics show that the Norton is Britain’s most successful post-War Grand Prix racing motorcycle, the country’s first success in the modern era’s World Championships was achieved by another marque with an equally illustrious racing history: AJS. And the machine that carried Les Graham to his, and AJS’, first and only World Championship was, of course, the legendary AJS E95 Porcupine. And unlike the Nortons, the AJS E95 Porcupine is a totally unique design, owing nothing to the production models.

Introduced in 1952, the AJS E95 engine had its cylinders tilted upwards at 45 degrees, an arrangement that called for a new frame, and featured a long underslung oil sump, and pressed-up crankshaft with onepiece connecting rods and roller big-ends in place of the E90’s one-piece shaft and shell-type bearings. Another new addition to the AJS team for ’52 was New Zealand star Rod Coleman. Coleman had first been given an E90 to try at the ’51 Ulster GP, and followed that up with a strong showing at the Grand Prix Des Nations at Monza.

In 1954 Jack Williams took over the race team and the result of his brilliant development work was a much smoother, more reliable engine and a better handling bike. The AJS E95 Porcupine and works ‘tripleknocker’ 7R3 gained new pannier-style fuel tanks, which extended down on either side of the engine thus lowering the centre of gravity and affording a measure of streamlining at the same time. A new second version frame lowered the bike still more. An AC fuel pump raised petrol to the carburetors, and a clever delivery system involved mechanics standing the bike on its rear wheel to prime the header tank for starting!

Bob McIntyre, Derek Farrant and Rod Coleman were the riders, the last providing the Porcupine with its best international results of the season, placing second in Ulster and winning the Swedish Grand Prix. Sadly, just when the AJS E95 Porcupine was at last proving its full potential, 1954 would prove to be the AJS E95 Porcupine’s swansong year as AJS withdrew from direct involvement in Grand Prix racing at season’s end. In total, just four complete AJS E95 Porupines were built, plus one or two spare engines. With the exception of the Tom Arter machine, they were raced only by the works team and never offered for public sale.