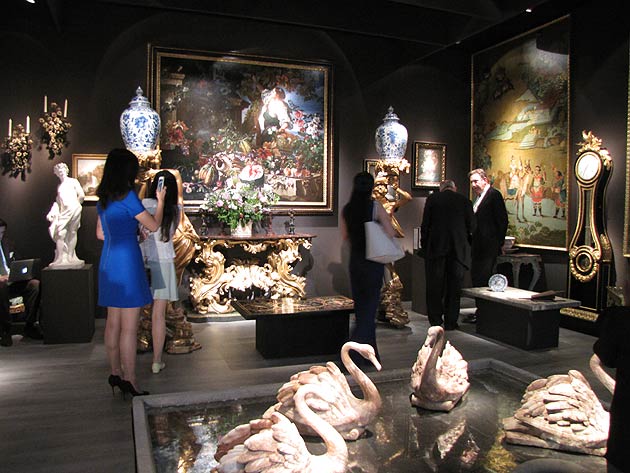 As I drove down the Embankment in London recently I did a double-take as what had been green open fields in front of the Royal Hospital Chelsea had been replaced by a huge stately home! Another glance to my left revealed that all was not what it seemed.

This was no country pile of brick and stone, but an enormous temporary structure decorated to give the appearance of Georgian architecture.

A few days later, I was back and joining a total of 35,000 visitors who came to admire and purchase exceptionally high-quality art, antiques, jewellery and design from all over the world.

Impressive pieces were everywhere but what really caught my eye was the number of surprising and possibly unique pieces. They ranged from sculpture and artefacts from ancient Rome and Egypt right up to the latest model from Maserati.

Many stands were impressive in their own right whether stylish spaces, recreations of rooms from a grand French chateau, moody spaces showing classical relics in subdued lighting or in one case a replica of a sculptor’s studio. This was the stand of Sladmore Contemporary who meticulously recreated the studio of Nick Fiddian Green. Nick created the large horse sculpture at London’s Marble Arch.

I was interested to see that a ‘Back to Venice’ sculpture by Lynn Chadwick sold at the show for £250,000. Lynn’s son Dan recently worked with me to create an LA client’s birthday present.

Last year, a London style magazine asked me for my Christmas gift wish list. Thanks to Masterpiece London, I’ve got my 2014 list together in one hit.

The ‘Grand Atlas’ of 1663 by Dutch master mapmaker Johannes Blaeu caught my eye. Twelve volumes comprising 593 engraved maps and plates with contemporary hand colouring which make up probably the greatest atlas ever. This includes 58 maps of England and Wales, the first atlas of China published in Europe, 23 maps of America including important early maps of Virginia and New England. Guide price: £780,000.

I was amazed by the outstanding detail and craftsmanship in this Meiji period shrine model. With a decent sized cupboard behind exquisitely decorated doors and with several drawers, it would make a great cocktail cabinet. Guide price: £170,000.

Early Persian backgammon/chess box with the boards of the two games combined and decorated with incredible micro mosaic. Guide price: £10,500.