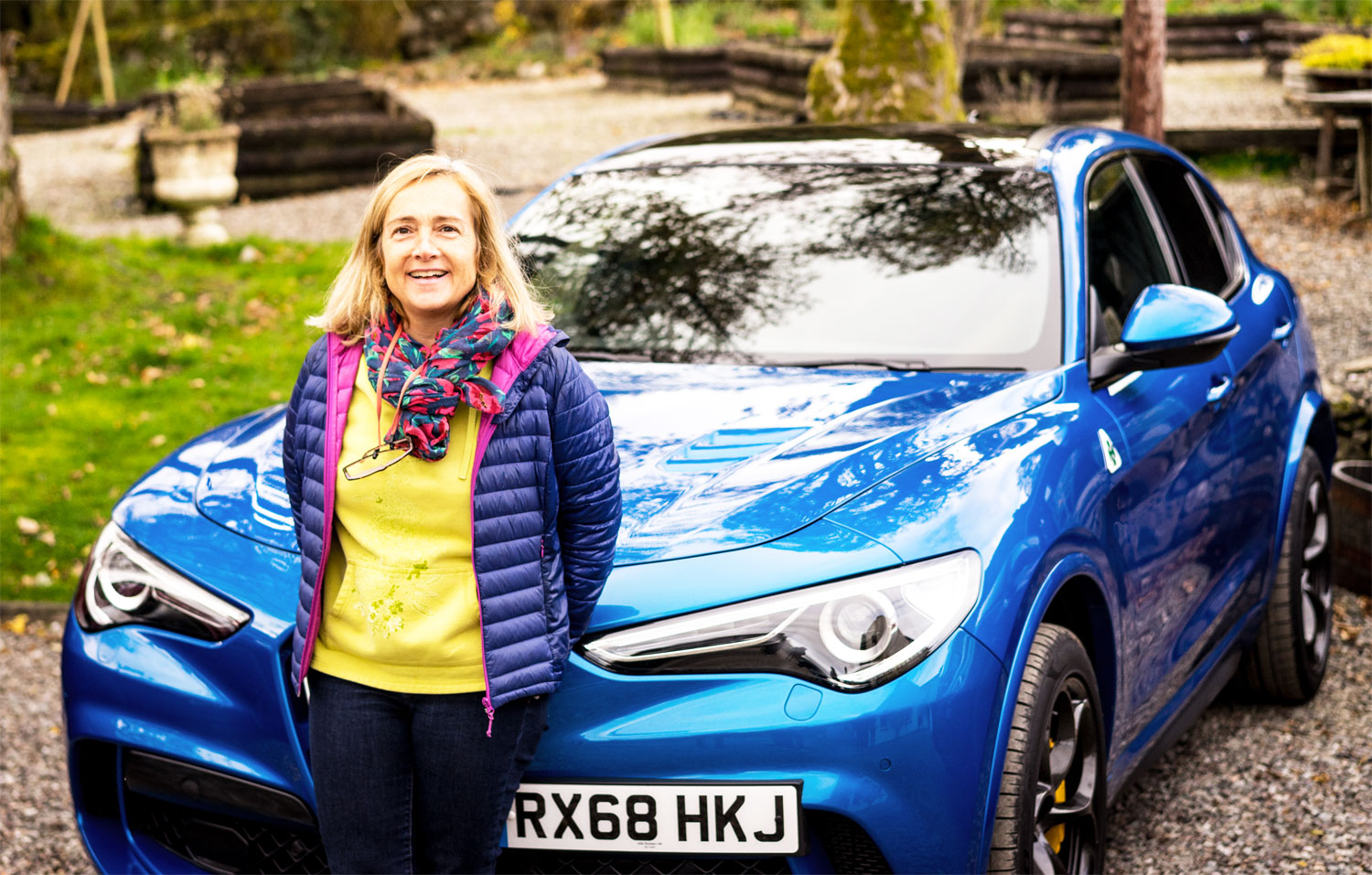 Scotland: Home of Braveheart, tartan, whisky, wild and wuthering weather, men in kilts (at least at Glasgow airport the day we arrived), neeps and tatties – and most importantly some of the best driving roads in the UK. Oh, and one particularly welcoming boutique hotel on the shores of Loch Vail – but more on that fine establishment later… 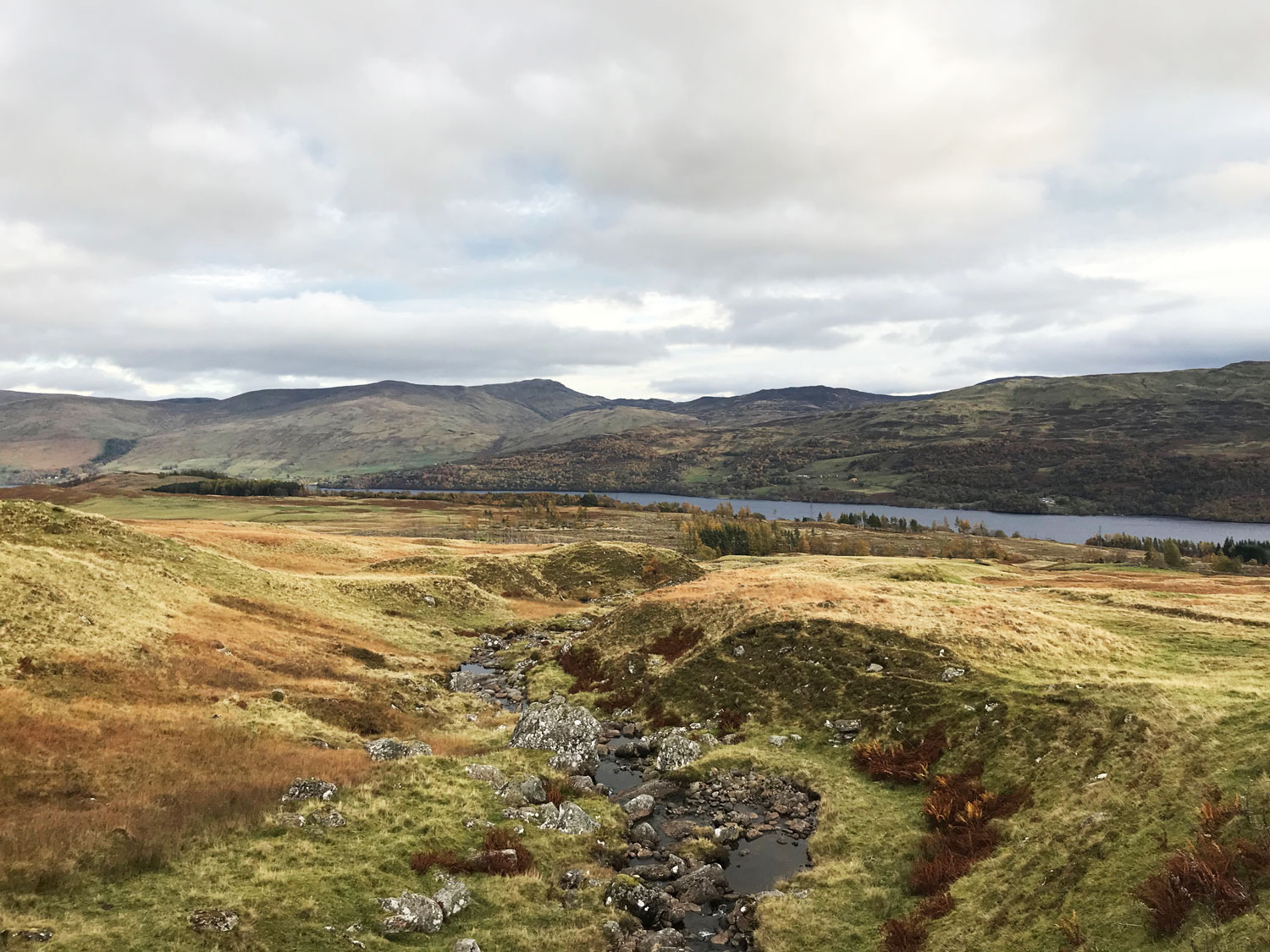 We’re north of the border for the UK press launch of Alfa’s first SUV: the powerful Stelvio Quadrifoglio. With a top speed of 176mph from its thrusty 2.9 V6 Bi-Turbo aluminium engine, you might think the new Stelvio Quadrifoglio is better suited to the Nürburgring than the Scottish Highlands. And you’re partly right: this 4WD beast lapped the German track in an impressive 7’51” – making it the fastest production SUV in the world.

Alfa’s designers have created a sleek, muscular beauty with the look of a sports sedan wrapped up in the body of a unique SUV. Details like the massive wheel arches, 20-inch alloys, side skirts and air vents all flow seamlessly and enhance the Stelvio’s bullish lines with none of the boxiness of some of its class competitors. Function and form are integral to this iconic marque which has given the Stelvio Quadrifoglio a longer bonnet and shorter haunches and rear side – resulting in sportier lines and more aerodynamic capability than other SUVs in her class. And of course, there’s the lucky four-leaf clover badge – originally painted on his racing car by Alfa driver Ugo Sivocci. 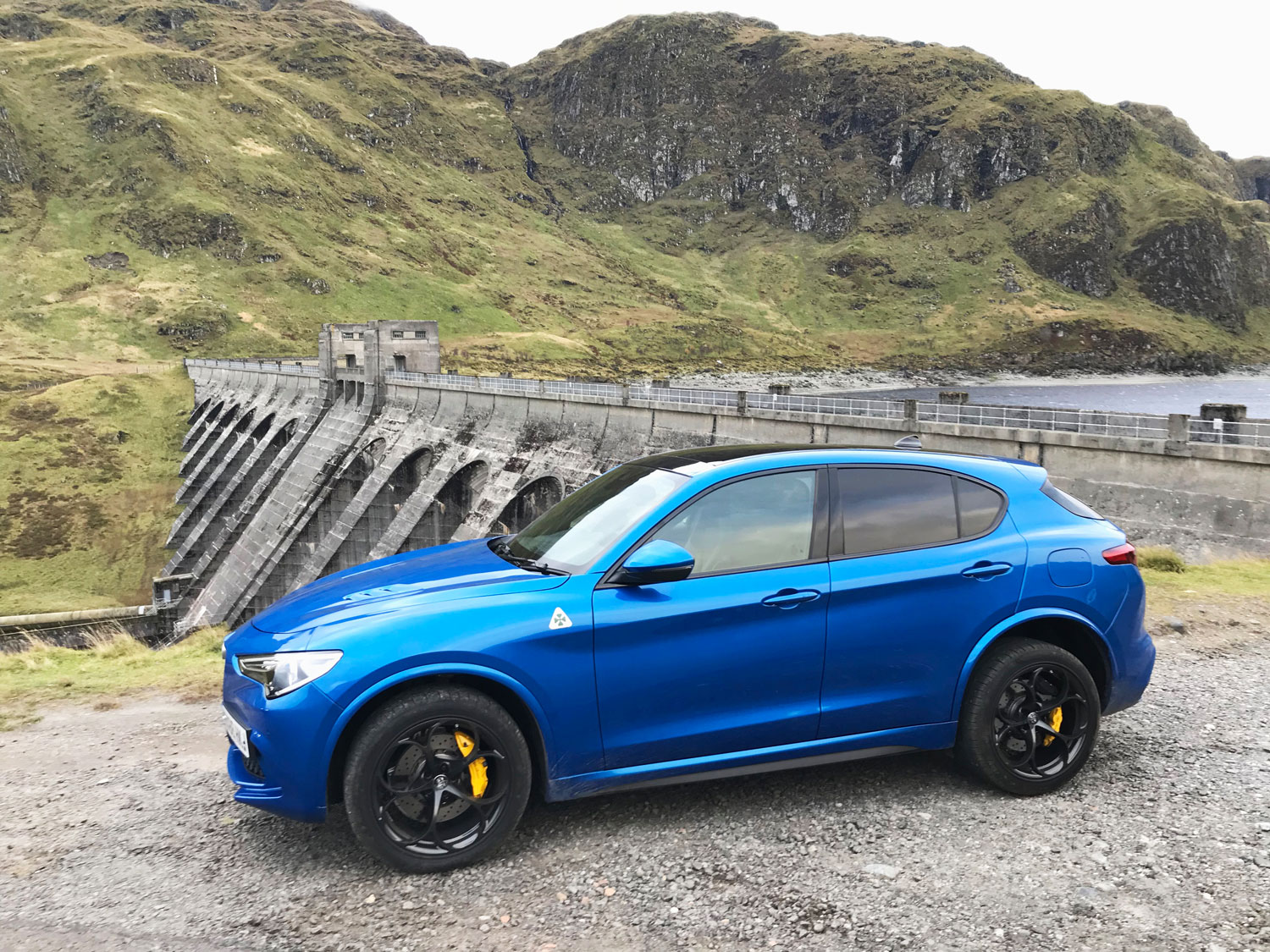 Our car was an unusual Misano blue with gorgeous yellow brake calipers. (which also come in red and black). I loved the Competizione Red and the Trofeo White – both colours looking fabulous against the Scottish autumnal hues. Car body colours are in a choice of 8 colourways with brake calipers in red, black and yellow. The iconic front Trilobe is typical of this Italian brand – high strength steel for the body; aluminium suspension, doors, bonnet wings and engine. Plus a carbon fibre driveshaft and 50:50 weight distribution. 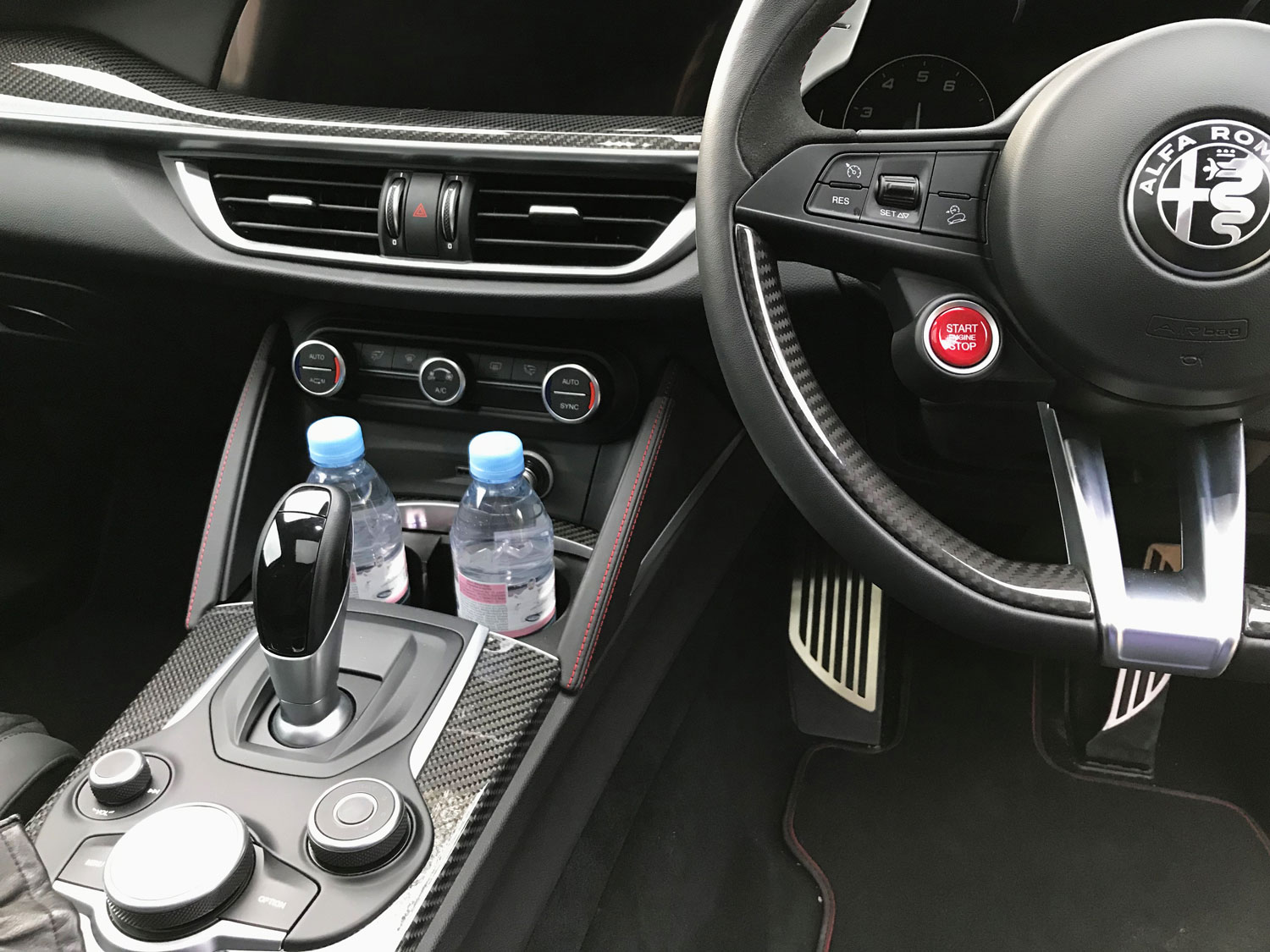 I’m keen to experience the Stelvio Quadrifoglio’s rating of 0-62mph in a mere 3.8 seconds. There are three driving modes: Race (track), Dynamic, Natural (daily driving) and Advanced Efficiency (best for low-grip conditions). Needing both traction and stability for the single track and A and B roads here in the Highlands, we drive in Natural mostly with a flurry of Dynamic.

The result in Dynamic is a noticeable increase in gearshift speed, with a more engaged throttle reaction. I love it! And it’s the noise of those quad exhausts as we power through the revs that excites the most. Pure aural satisfaction. The Stelvio Quadrifoglio boasts a specially calibrated eight-speed auto transmission, together with efficient one-piece aluminium paddles for manual override – especially important to hear that exhaust pop into life with its unmistakable Alfa racing pedigree roar. 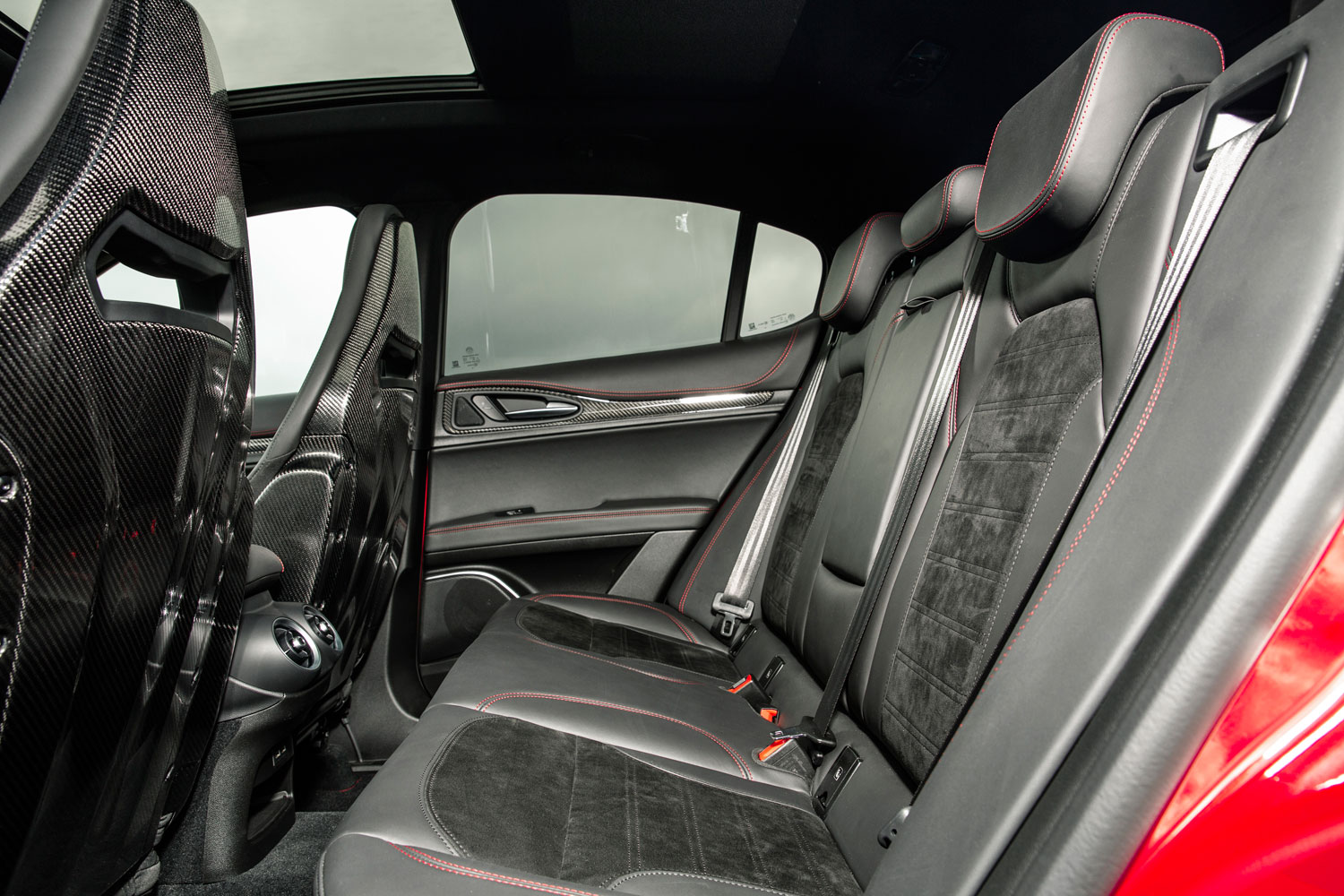 I feel snug and cocooned in the Leather/Alcantara Stelvio Quadrifoglio’s Sparco Carbonshell Sports seats with 8 easily adjustable settings on the lower side of the seat. Especially welcome is the extra thigh support for tackling the multiple bends here in the Highlands. And I love the higher perspective which is essential in the half-light of a Highland dusk when a stag leaps across the road in front of us.