As part of a strong range of new introductions, Swiss Watch Manufacturer Alpina Genève is proud to launch the new Sailing Collection, inspired by the close collaboration with the Italian Extreme 40 Catamaran team Niceforyou. 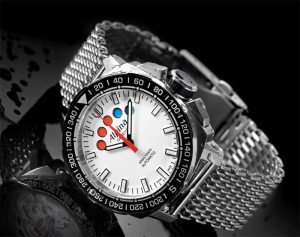 Emphasizing on its strong commitment to the spectacular Extreme Sailing Series, Alpina Watches Geneve have developed the automatic Yacht Timer caliber AL-880 in house, based on the Sellita SW500 chronograph movement. The caliber is encapsulated in a new, stainless steel 30 ATM water-resistant case, of which the shape resembles Alpina case designs from the past. The automatic Yacht Timer caliber AL-880 model with sailing countdown function is available either with a white or a black dial. In addition to the new automatic Yacht Timer caliber AL-880, Alpina introduces another attractively priced version the Alpina Sailing Automatic with 3 hands and a date window, with similar case and dial design. All Alpina Sailing timepieces are available on rubber strap, metal bracelet or metal mesh bracelet, for absolute comfort and security in the most extreme situations.

To promote this entirely new collection, Alpina Genève is proud to announce its exclusive partnership with Team Niceforyou, which is engaged in the Extreme Sailing Series. Niceforyou believes in the quality and high standards of the Extreme Sailing Series and has decided to take part in the circuit from 2011, alongside a team of extremely high profile sailors, led by an exceptional skipper: Alberto Barovier. Barovier was the winner of the 2010 America’s Cup on board the trimaran BMW Oracle Racing. The team gathers some of the best sailors from Italy, who together boast 12 participations in the America’s Cup, more than 15 world titles, a similar number of European and national titles and one Olympic Game. For more information, please visit www.nicesailingteam.com.

Nine fantastic venues will welcome the international Extreme Sailing Series this season, the fifth consecutive year the circuit has dazzled VIP’s and spectators across the globe, with more days racing than ever before. A mix of buzzing cosmopolitan cities and spectacular seaside resorts, each carefully chosen to provide not only the hottest racing but also the best vantage points for spectators to get up close to all the action.

For 2011 there will be 47 days of racing and up to 282 races, each lasting around 20 minutes. Each day is a mix of corporate sailing races, giving VIP guests and media a chance to get out on the water and experience the Extreme 40 and then the real action of the Extreme Sailing Series racing itself — although there will still be ‘fifth man’ guests on board, expect the sailors to take no prisoners in the fiercely competitive races. Things will step up yet another gear for the final race of each event, which counts for double points!

Alpina Genève will equip the Niceforyou Team with timepieces from its new Sailing Collection and wishes already “Well wind” towards the victory!