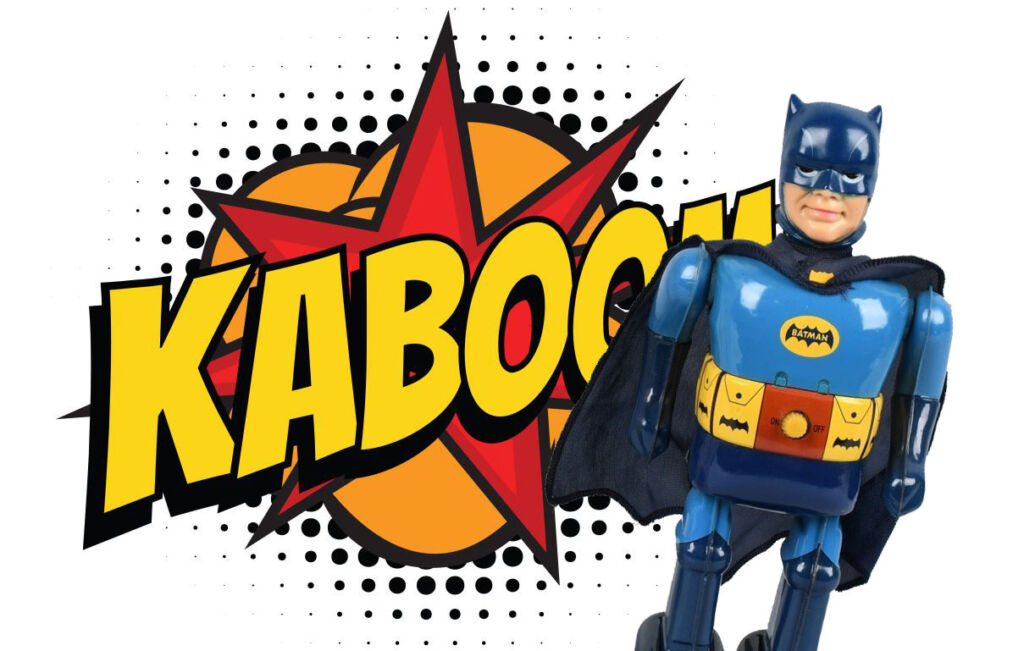 Batman first captured the public’s attention in 1939, when he appeared on the cover of Detective Comics #27. Since then, the masked crime-fighter has remained in the forefront of American pop culture, dominating all media and delighting generations of children in the form of toys that reflect Batman’s complex world of heroes and villains. On October 13, a classic battery-operated Walking Batman coolly strolled across the auction block at Milestone Auctions and in so doing set a new world auction record at $16,800.

Made in the postwar Japan by TN, the 12-inch Walking Batman was new/old store stock and appeared never to have been played with.

Its original Japanese-version box was a rare bonus and depicted “Adam West” as Batman with sidekick Robin in the Batmobile. “There was a lot of action on that toy from all over the world. It opened on our website with an absentee bid of $2,500 and was already up to $10,000 before the auction even started,” said Milestone co-owner Miles King.

“From all that we can determine, the $16,800 selling price is a new auction record for the Walking Batman toy.”

Space fantasy toys were in great demand. A boxed Buck Rogers U-238 Atomic Pistol Holster Set estimated at $800-$1,200 soared to new heights, landing at $4,440. “We couldn’t believe what some of the Buck Rogers items went for. There was a very nice selection in our sale, all from one consignor,” King said. “Buck Rogers was one of the earliest space-themed characters. It’s hard to believe he was introduced some 90 years ago and still has such a huge following with collectors.”

A Superman Krypto-Raygun made by Daisy was all original and presented in a colourfully lithographed box complete with all six filmstrips and instruction sheet. An early Superman toy designed to allow the user to point the ray gun at a wall and view “picture stories,” it rose to $2,280.

Another crowd-pleaser was Transogram’s Elroy Jetson Bobbing Pull Toy Space Car. It was offered in mint condition and sealed on its original display card with images of both Elroy and his dad George and a tagline about the vehicle’s “GRR-RR Motor Sound.” Estimated at $800-$1,000, it made $1,860.

Also, a 7-inch tin friction Flying Saucer Z-101 in its crisp, colourful original box disintegrated its $400-$600 estimate to settle at $3,480. “It had a crude, early look that space toy collectors love,” King noted.

For Disney fans, there was an impressive array of 1930s through postwar-era toys. A rare and near-mint Marx boxed set featuring Pinocchio and Figaro the Cat tin windups, both in tip-top condition, was the ultimate two-for-the-price-of-one deal. Estimated at $1,000-$1,500, the set more than doubled expectations, finishing at $3,480.

An American antique toy of undeniable museum quality, a circa-1875 Ives Mechanical Performing Monkey with handbells boasted extremely fine condition, with bright, unfaded clothing and perfect facial paint. It also retained its original wood box with an applied pictorial label indicating it had received a US patent, presumably for its unusual action. The 19th-century charmer handily surpassed its high estimate to garner $4,680.

“We could not have been more pleased with the way this auction went,” said King. “It was 100% sold and grossed over $290,000. We saw many new faces at the gallery, and there were online and phone bidders from 26 countries, all pointing to a strong and well-supported toy market.”