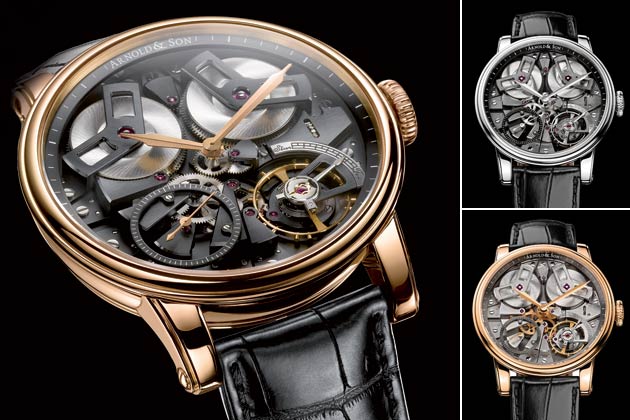 The history of Arnold and Son dates back to nearly three centuries. In 1936 John Arnold was born in Cornwall, England and later studied watchmaking at the youthful age of 19.

Amongst his many achievements he devised a range of efficient chronometers. He was also instrumental in designing the concept for tourbillon movement. Subsequently it was his good friend Abraham-Louis Breguet that produced a complete working mechanism. Broadly speaking these two exceptional men are considered to be the inventors of the modern day mechanical wristwatch.

In 1769 John Roger Arnold was born. He then served an apprenticeship with his father and Abraham-Louis Breguet. In 1787 he and John Arnold established the company Arnold & Son. Presently a group of watchmakers in Switzerland have adopted this brand name to produce a range of stylish timepieces. Even though they have no connection to the original company they still adhere to the same high standards. Impressively they also manufacture all their own movements in workshops located at La Chaux-de-Fonds.

The modern day Arnold & Son is highly regarded in the world of horology as a fine watchmaker. A lot of their timepieces in their Royal Collection have been inspired by British heritage. Some of the recent watches include titles like HMS Victory, HMS Lady and Hornet James Cook Set. One of my favourites is the sensational TB88 series. The case of this fantastic timepiece is available in a choice of stainless steel or luxurious 18-carat rose gold. With a generous diameter of 46mm all three of the models should appeal to the discerning collector.

Visually the TB88 is pretty stunning and in my opinion highly original. The wonderful openwork dial is composed of multiple layers, which gives the timepiece substantial depth. It also exposes the intricate mechanics of the watch’s movement. Elements such as the refined hour/minute hands, small second counter (located at 8 o’clock) and the understated chapter ring are highly effective. Overall the design of this watch has been well considered and perfectly executed.

To power this exquisite watch Arnold & Son have developed the highly sophisticated Calibre A&S5003. This manual wound movement comprises 32 Jewels and oscillates at a frequency of 18,000 vibrations per hour. Every component has been hand decorated using the finest traditional techniques including chamfering and polishing. This exceptional craftsmanship is visibly showcased through the sapphire crystal case back. The TB88 features hours, minutes and true beat seconds. It also has a respectable power reserve of 100 hours and is water resistant to a depth of 30 metres.

The Arnold & Son Royal Collection TB88 is equipped with a choice of black or brown hand sewn alligator strap.

You can read more reviews by Steve Huyton on his own website: www.totalwatchreviews.com