The Bell and Ross Twelve O Clocktime piece – An Abstract Portrayal of the Passage of time. 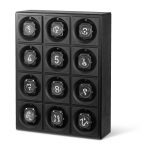 By its very nature, time is a relative concept that man has always wanted to punctuate with markers. The development of watch mechanisms has enabled it to be measured precisely. With the creation of the Bell and Ross Twelve O Clock timepiece, Bell & Ross is rewriting the rules of traditional watchmaking by doing away with minutes and seconds. Designed as an objet d’art, the Bell and Ross Twelve O Clock timepiece is an artistic interpretation of the Bell & Ross disk-based display. Primarily conceptual, it is a constantly evolving animated piece of art, only indicating the exact time for a fleeting moment.

The Bell and Ross Twelve O Clock time piece – An original and, fleeting reading of time

The BR Twelve O Clock is a clock made up of 12 display watches.

• Each number is drawn on three concentric disks. As the disks rotate, the numbers become fragmented making them illegible. You must wait until the disks are correctly positioned to be able to read the time.

• The exact hour is indicated by the only watch that displays a number in a vertical position.

For example at three o clock, the third watch shows the number 3, while the images on the other watches remain fragmented. At four o’clock, the number 4 is shown on the fourth watch and so on. As time passes, the twelve watches create an abstract picture with a fascinating movement.

The twelve watches use the disk-based display technology developed by Bell & Ross. The display is in the form of three separate concentric disks on single plane. As they rotate, an adjustment to the nearest micron ensures that the disks are constantly parallel. The technical challenge lies in the design and production of the three disks and in the accuracy of their assembly. It requires all the expertise of the master watchmakers. The twelve automatic watches come in a box with twelve battery-powered winders with push button operation. This system guarantees a constantly changing montage.

A timepiece and an objet d’Art

In modern- day society, where every second is accounted for, the Twelve O Clock timepiece is a demonstration of our inability to control the sands of time. The animated display that gives the time in a split second is the perfect illustration of the elusive nature of time. With just 12 pieces produced, the Bell and Ross Twelve O Clock looks at time in a totally new way. A truly animated objet d’Art, its complex mechanism and its continually changing image will not fail to amaze. It will delight both watchmaking enthusiasts and collectors of art.

Dial: the numeral of the hour is printed on three concentric disks, which, when lined up in the vertical position, indicates the exact hour.