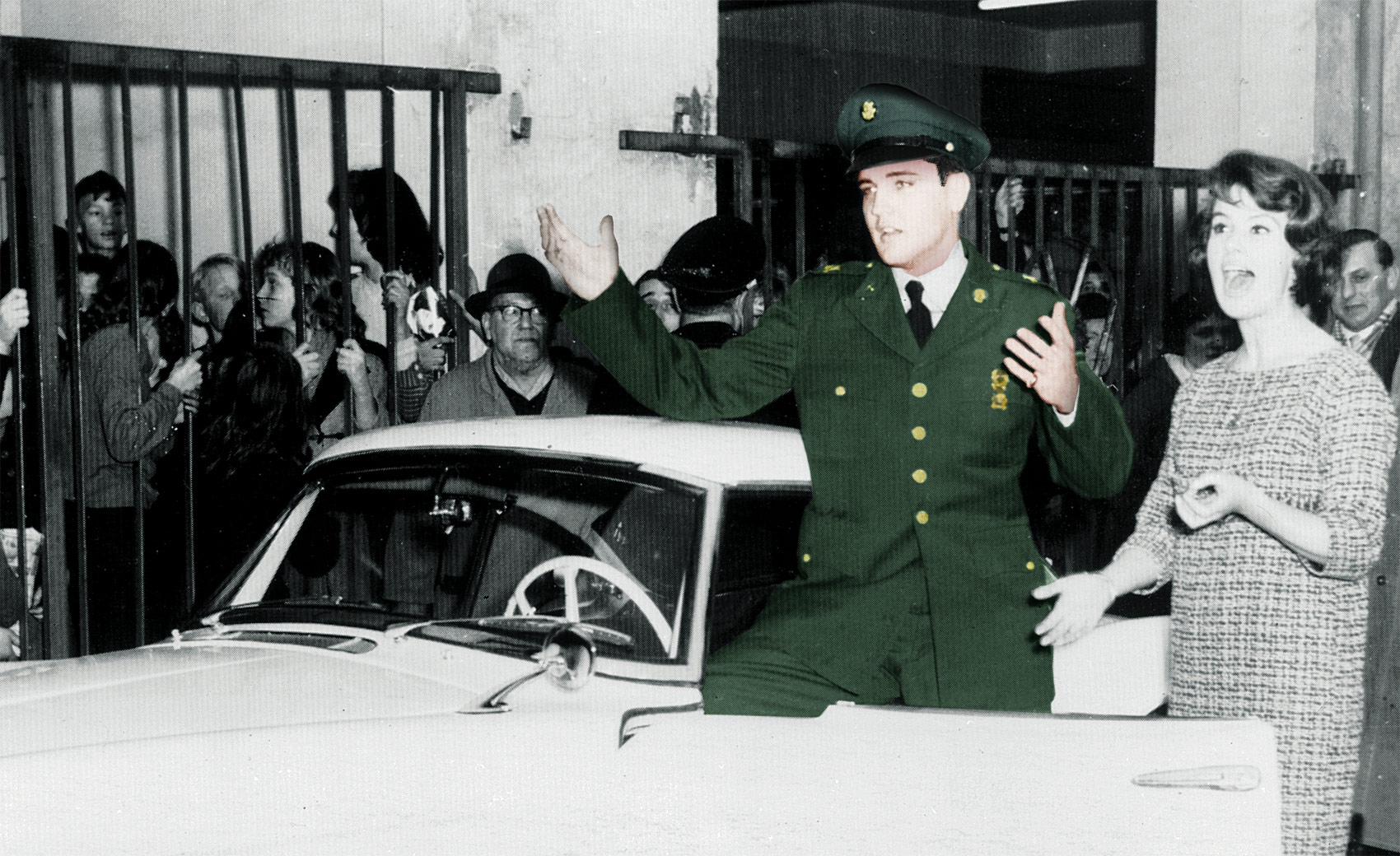 The glittering comeback is now following one of the most spectacular classic-car discoveries of recent times. The BMW 507 was driven by US musician Elvis Presley, famous already at that time as the “King of Rock’n’Roll”, while he was doing his military service in Germany. After that it disappeared for nearly 50 years and was believed to have been lost before returning to the limelight. After almost two years of exacting restoration work, BMW Group Classic is presenting the roadster for the first time in a public arena. Restored to its original condition, it will be exhibited on 21 August 2016 at the Concours d’Elegance in Pebble Beach, California. The BMW 507 with chassis number 70079 will be on view for visitors to the popular classic car show exactly as it was when soldier Elvis Presley took delivery of the car on 20 December 1958: with paintwork finished in Feather White, the 150 hp V8 aluminium engine under the bonnet, centre-lock rims, black-and-white interior and a Becker Mexico radio.

“The opportunity to bring back the BMW 507 owned by the King of Rock’n’Roll to us here in Munich for purposes of restoration in accordance with the wishes of the previous owner, Jack Castor, was a dream come true for all those involved,” commented Ulrich Knieps, Head of BMW Group Classic. “This was an exceptionally fascinating project. The outcome is not simply a source of great pride to us. Jack would undoubtedly have been delighted by the outcome.” In the summer of 2014, the exhibition of the unrestored discovery at the BMW Museum generated a great deal of excitement among classic car enthusiasts, but it also threw up questions: Was this really once Elvis’ BMW 507? And will it even be possible to transform this roadster back into a jewel of the 1950s? 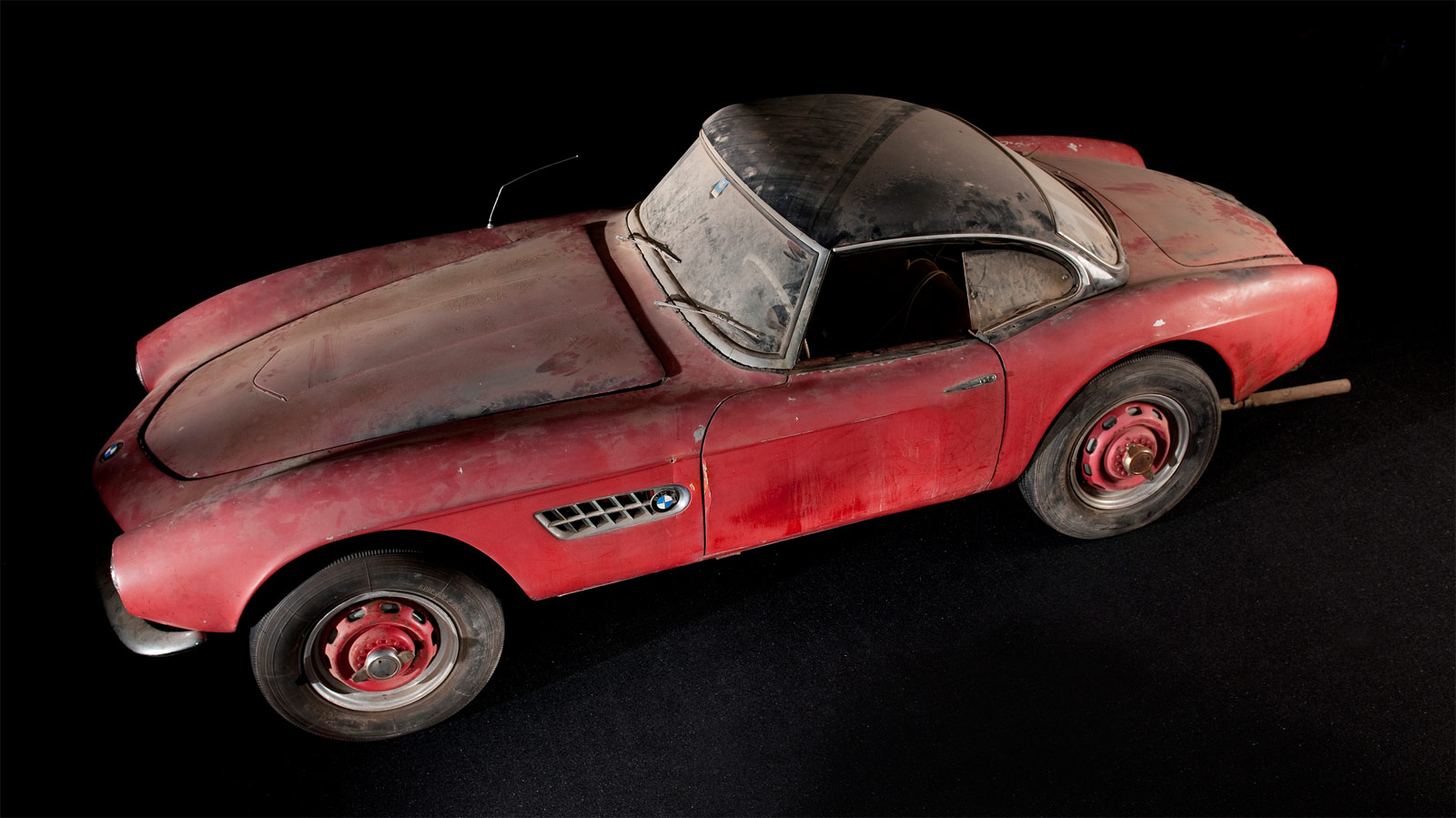 From “Return to Sender” into “It’s Now or Never”.
The condition of the two-seater really was a cause for concern. Although the original body parts and other components were virtually all present and intact, the roadster had lost its engine and gearbox. The rear axle was a “replacement part” of unknown origin, rust was eating away the floor assembly, the seats were worn and there was no instrument panel. However, the fascination of a rare and beguilingly beautiful automobile outweighed all the inadequacies and deficiencies, augmented by the memory of Elvis Presley and his greatest hits. While the roadster came back to Munich under the slogan of “Return to Sender”, the solution was undoubtedly “It’s Now or Never”. A project managed by BMW Group Classic succeeded in restoring the automobile. In-house experts and external specialists joined forces to carry out the work and the result defined new benchmarks for the restoration of a BMW 507. 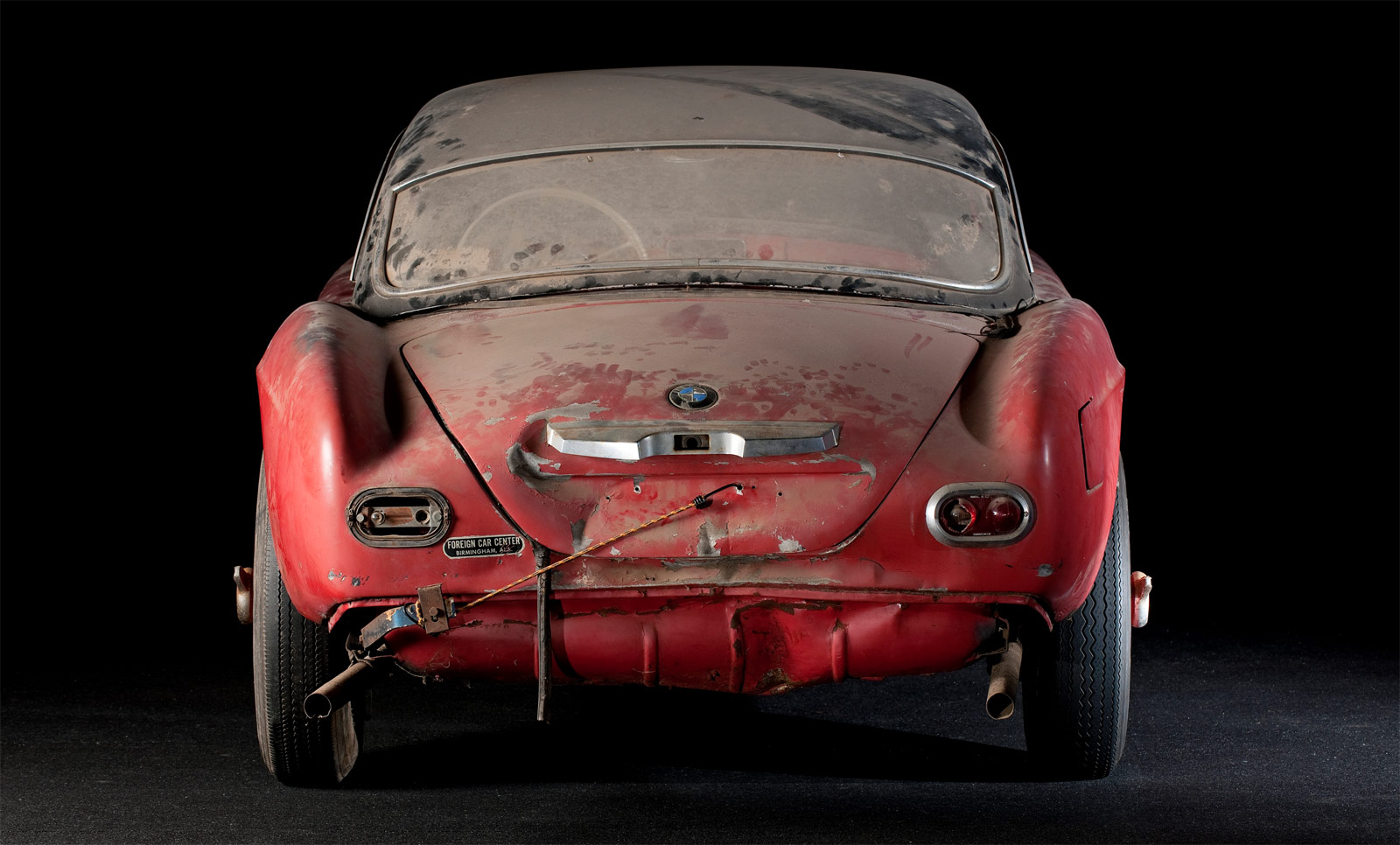 Looking back on the process, the story of Elvis’ BMW 507 and its restoration is pure Rock’n’Roll: as captivating as the swinging hips of the “King”, energy sapping, an emotional roller-coaster, and full of surprising twists and turns. This is not simply a tale about the young GI Elvis Presley. It is also about the experienced “hillclimb champion” Hans Stuck, kissable lips daubed on white paint, a retired space engineer and a warehouse for pumpkins, a Chevy engine that was much too big, rubberised coconut mats and door handles printed in a 3D process. And the story already began three years before the “King” started military service with the US Army stationed in Hesse, Southern Germany.

Myth among rarities: The BMW 507 of the “King”.
The BMW 507 has always been one of the most exclusive and sought-after rarities in the model history of the brand with just 254 automobiles being produced between 1955 and 1959. Right after its world premiere at the Frankfurt International Motor Show in 1955, the two-seater penned by designer Albrecht Graf Goertz was hailed in the press as the “Dream from the Isar”. Celebrity owners like Alain Delon, Ursula Andress and John Surtees contributed to the image of the roadster as a status symbol. However, no other automobile of this model is shrouded in mythology like the BMW 507 once owned by Elvis Presley. This particular roadster was believed to have been lost for almost five decades. In fact, there was not even certainty about the chassis number of the car driven by the “King”. There were also doubts about whether Elvis Presley had ever transported the car back to the USA after he finished his military service in Germany, and nobody knew anything about the subsequent ownership of the car. 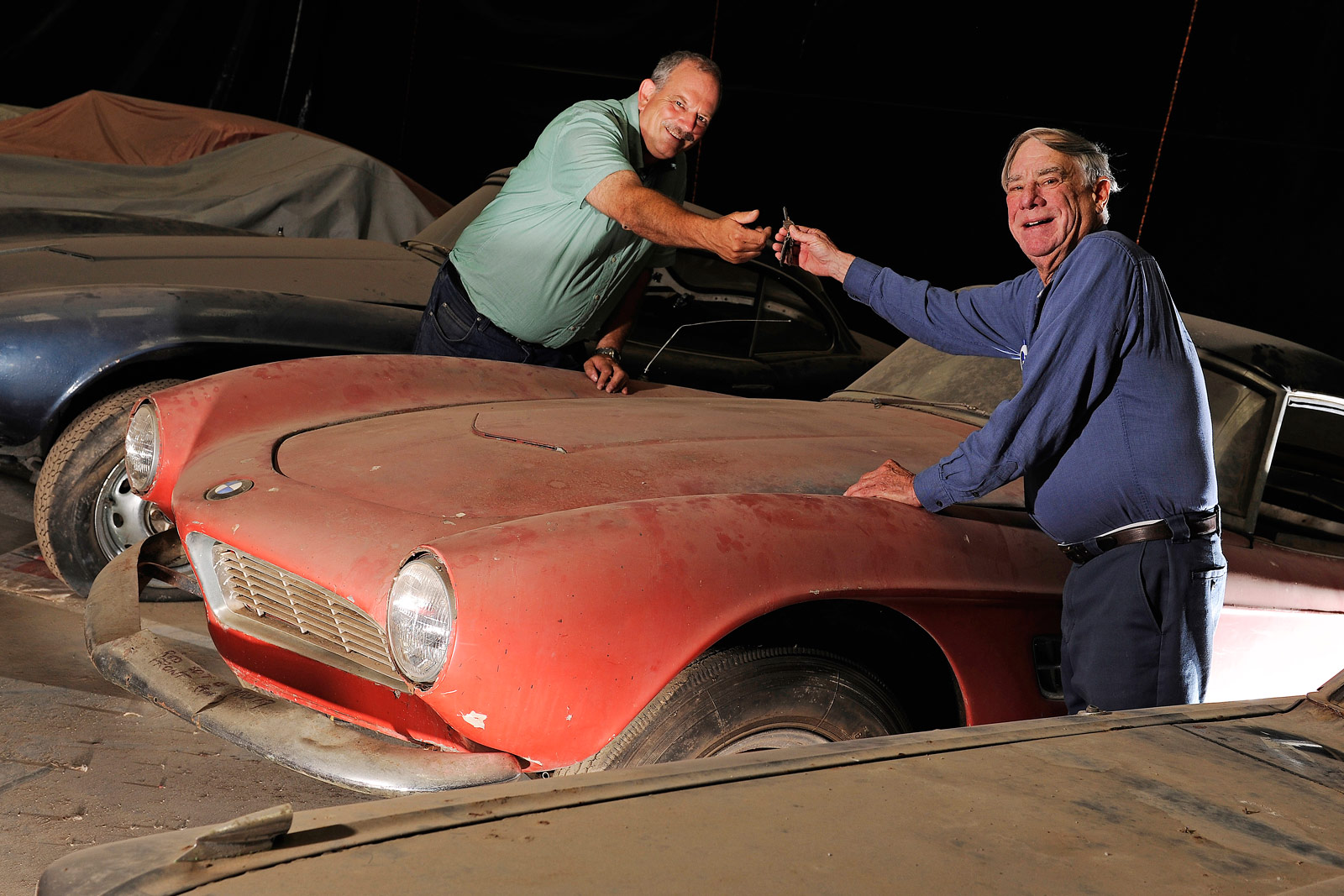 All these puzzles have now been solved thanks to the experts at the BMW Group Classic Archives and American journalist Jackie Jouret, who works for “Bimmer” magazine in California. In 2006, she was already searching through contemporary reports for Elvis’ BMW 507 and relevant literature going into the history of this model. During the course of her work, she uncovered an essential detail. Various sources highlighted the fact that the BMW 507 delivered to Elvis Presley in Germany was not a brand new automobile but had previously been used by racing driver Hans Stuck. Between May and August 1958, the racing driver known as the “Hillclimb Champion” won a number of hillclimbs in Germany, Austria and Switzerland – in a white BMW 507 with chassis number 70079 and registration plate M–JX 800. It is also a known fact verified by photographs that this roadster rolled off the assembly line on 13 September 1957. A few days later, it was exhibited at the Frankfurt International Motor Show and repeatedly used for test drives by the press. As early as October 1957, Hans Stuck presented the car at the London Motor Show and then drove the roadster through Belgium, where he presented it to King Baudouin, before motoring down to the Turin Motor Show. And as if that were not enough, in the summer of 1958, Stuck’s BMW 507 won the automobile beauty competition in Wiesbaden and then played a role in the Bavaria film studio for the feature film “Hula-Hopp Conny” with Cornelia Froboess and Rudolf Vogel. 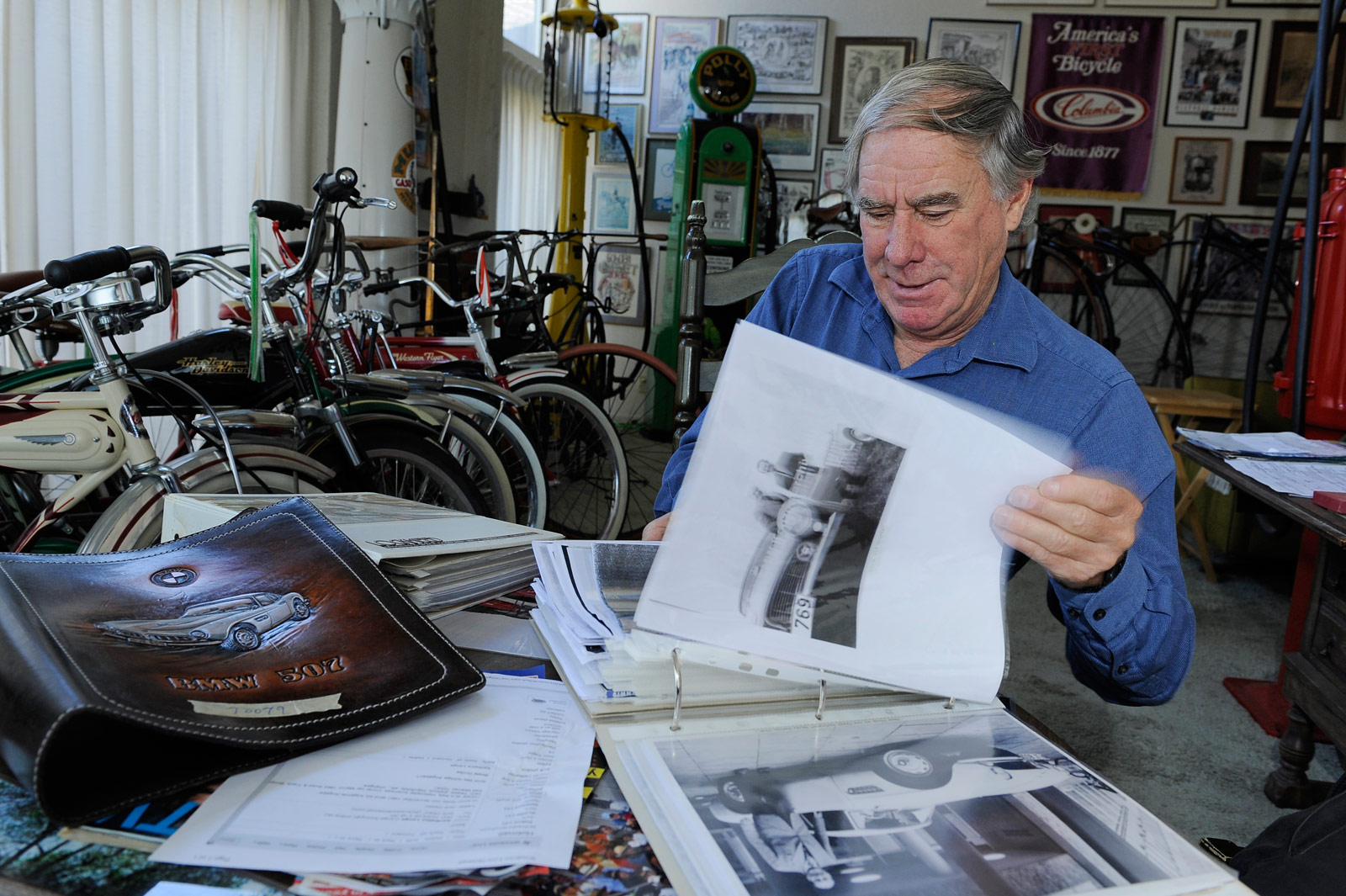 This vehicle had been carefully serviced at BMW after every race, the engine had been upgraded and a new gearbox fitted when it ended up with a dealer in Frankfurt in the autumn of 1958. The young US soldier Presley was 23 at the time, and he came along and took it out on a test drive for a spin. The “King” was immediately impressed by it and decided to buy the car. Photos taken at the time show that export licence plates had already been fitted to the BMW 507. Later on, it was given a registration from the US military that changed every year. This was part of the reason why subsequent identification of the vehicle proved to be complicated later on. The experts from the BMW Group Classic Archives were only absolutely certain about its provenance when they came across the insurance proposal from December 1958 which contained the chassis number 70079 alongside registration of the keeper of the vehicle as Elvis Aaron Presley. 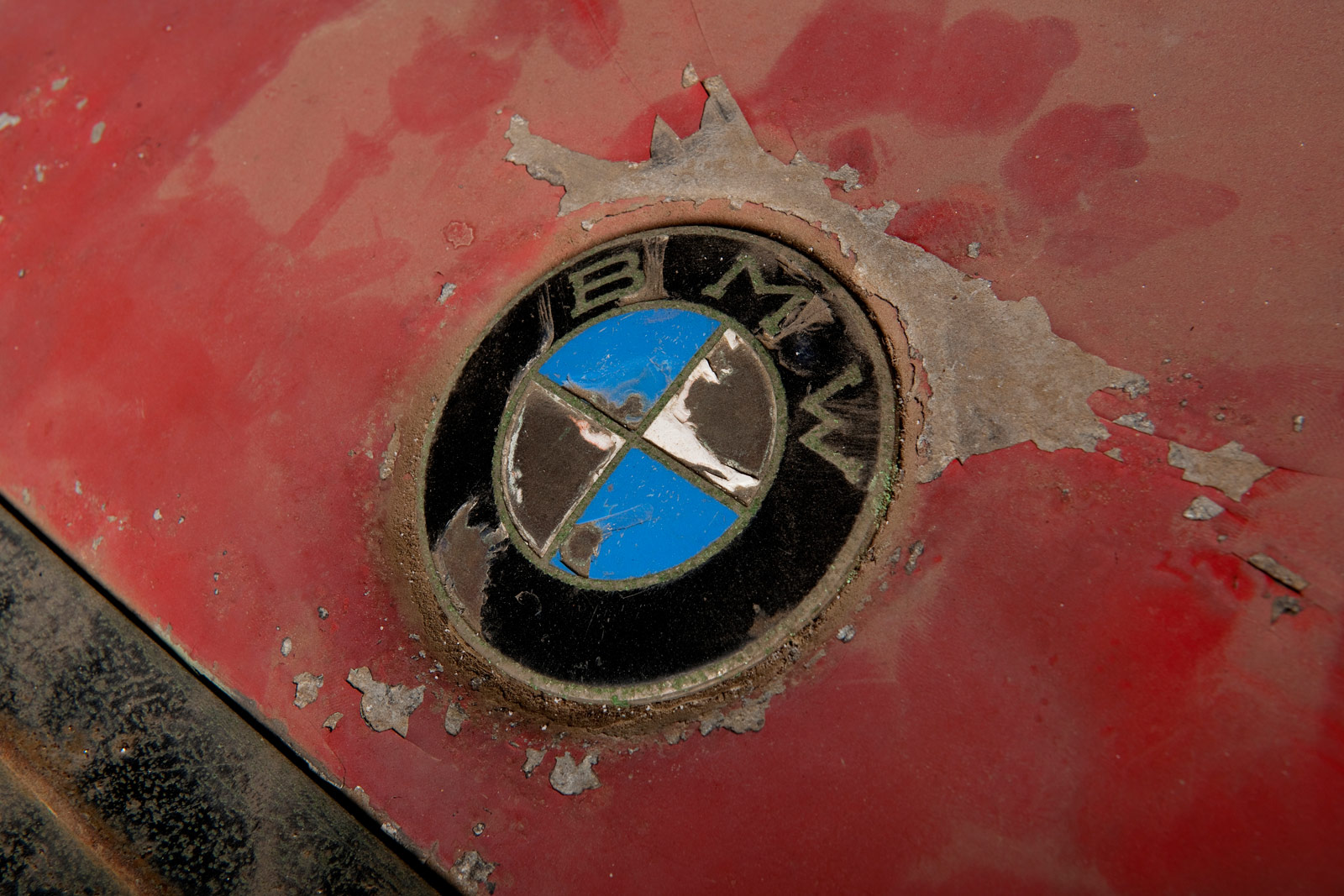 Pampered in Germany, radically modified in the USA.
Elvis Presley used the BMW 507 to drive between his home in Bad Nauheim and the US Army Base in Friedberg. His female fans always kept a close eye on him and he was often mobbed by them. The paintwork of the roadster was frequently daubed with messages of love painted in lipstick. These signs of adoration were by no means unusual for a rock star but they were an embarrassment to Presley as a young US soldier. A new livery in Red for the vehicle solved the problem.

In March 1960, Elvis Presley ended his military service in Germany. Back on American highways, he must have abandoned sheer driving pleasure in an open-top BMW since a few months later he traded in the red roadster bearing chassis number 70079 with a Chrysler dealer in New York. The dealer, in turn, sold the car for the ridiculously low price from today’s perspective of 4 500 dollars to radio moderator Tommy Charles. Charles took the automobile to his hometown of Birmingham in the state of Alabama where a very successful racing career began, although this move was very questionable when it came to the issue of authenticity. The BMW 507 was fitted with a Chevrolet engine in preparation for action on the race track. This took up so much space that parts of the front frame carrier had to be cut out. The gearbox and the rear axle, and the instruments in the cockpit were replaced. Charles won a race in Daytona Beach/Florida with the radically modified roadster and he lined up on the starting grid in several more competitions before selling the vehicle in the course of 1963. 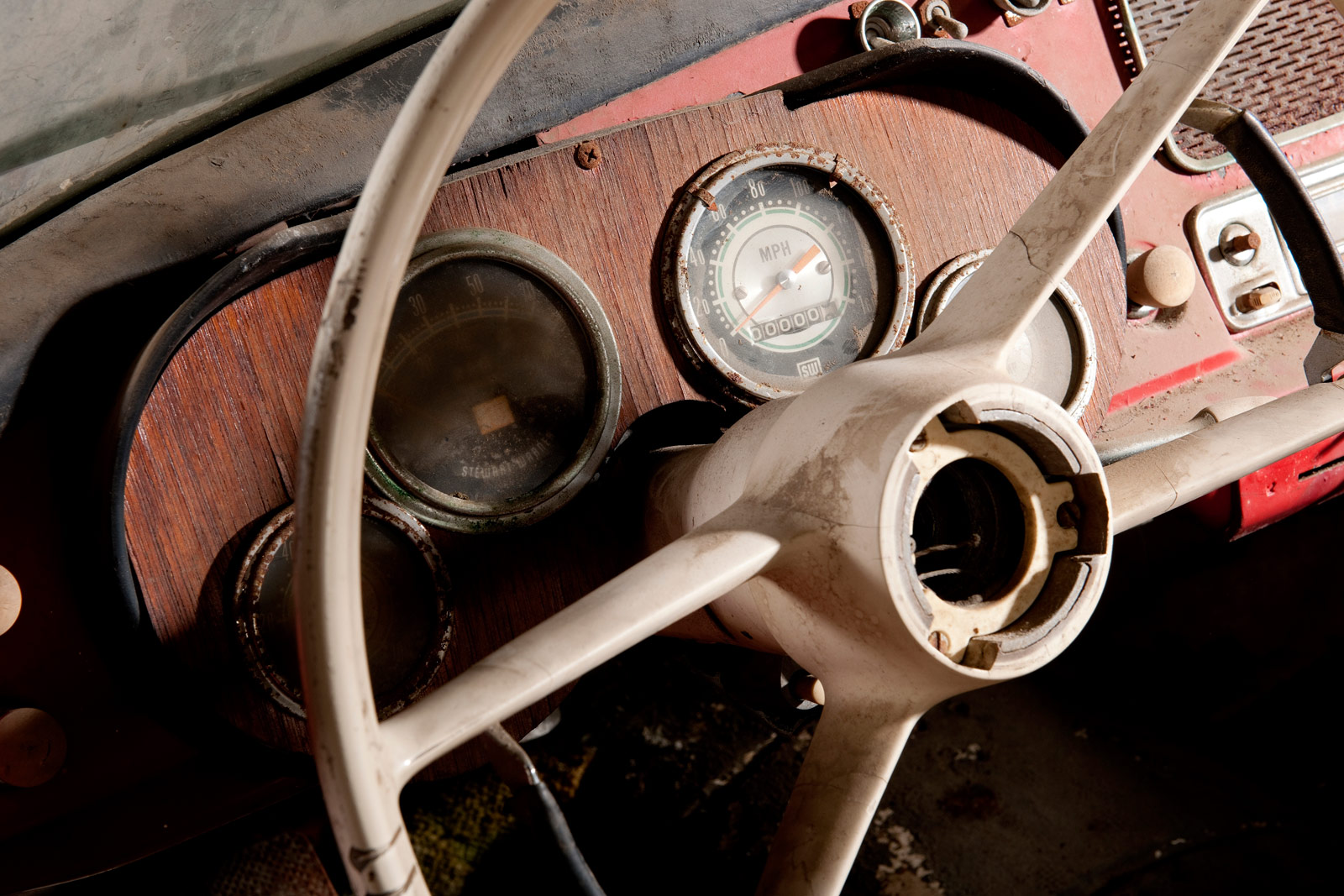 Two more changes of ownership followed and the BMW 507 then went to California. Space engineer Jack Castor acquired the car in 1968 and he used it occasionally as a runabout for everyday use before deciding to put the car into storage for a subsequent restoration. Castor was a passionate collector of historic bicycles and over the years he also amassed an impressive collection of classic automobiles in Half Moon Bay to the south of San Francisco. He got involved with several classic car clubs and delved into the history of the vehicles he had acquired.