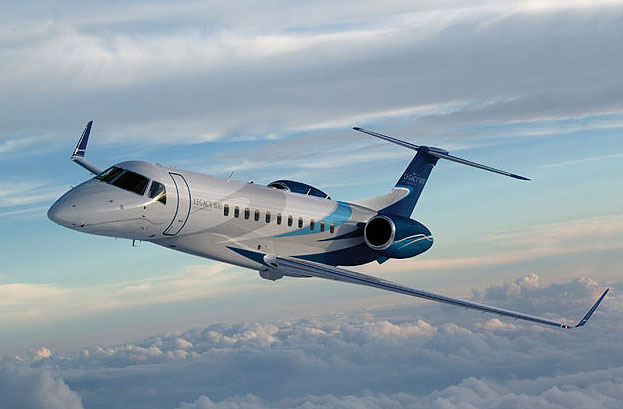 Embraer launched the global tour of the Legacy 650 with the new 2012 Interior recently at the NBAA Regional Forum in Van Nuys, CA.

During the Forum, the 2012 Legacy 650 was joined by the Company’s entire fleet of in-service executive jets from the entry-level Phenom 100 to the ultra-large Lineage 1000. The Legacy 650 is sporting its new, state-of-the-art improvements to passenger comfort and productivity as well as advanced cockpit technology that is now standard on the large-class executive aircraft.

“The 2012 Legacy 650 interior significantly raises the bar for the large executive aircraft class,” said Ernest Edwards, President, Embraer Executive Jets. “We offer a new cabin management system, reduced noise levels and avionics advances that equip the aircraft for the future air traffic control system. It also includes new finishing materials for cabin, galleys and lavatories. With this new interior customers will have a more advanced and comfortable environment in which to relax or to maintain their productivity.”

After the NBAA Forum, the aircraft began a year-long tour, which will include numerous stops besides major industry events. In addition, it will make appearances in Europe at the European Business Aviation Convention and Exhibition scheduled for May 14-16 in Geneva and the Farnborough Air Show July 8-15. It will be shown at the Latin American Business Aviation Convention and Exhibition, August 14-18, in Sao Paulo, Brazil and the 65th Annual NBAA show scheduled for October 30-November 1 in Orlando, FL. It is also scheduled for for appearances at major shows in the Middle East, Africa and Asia. 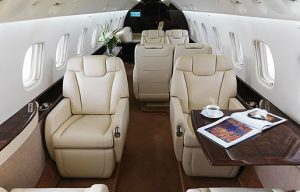 The interior includes an 8.9-inch touchscreen CMS controller in the galley as well as individual, in-seat touchscreen units that control video, audio, lighting and temperature. A 17.5-inch LCD monitor comes standard but customers can choose from a number of monitor options including up to a 32-inch credenza version, a 24-inch, aft-bulkhead configuration or individual seat monitors. The entire system can be complemented by crisp, two-zone surround sound. For US operators, the Legacy 650 can come equipped with XM Radio.

In addition to improved interior storage and restyled seats, Embraer is now offering 12 species of finishing veneers along with six optional premium choices. Customers also have six natural stone flooring choices for the galley and lavatory. The new seats offer side-pocket storage and greater swivel movement in the third zone.

Cockpit improvements include improved avionics with the Honeywell Primus EliteTM. Designed to reduce pilot workload as well as improve the flexiblity, efficiency and safety of aircraft operations, the Elite system includes LCD displays and a Cursor Control Device (CCD) as well as charts and maps capabilities. XM Weather is available for US operations. Embraer has prepared the aircraft for the future by incorporating VNAV and RNP 0.3 for optimizing airspace use, flight time and fuel burn. WAAS/LPV along with CPDLC FANS 1/A, enabling satcom-based ATC communications for trans-oceanic flights, are available as are such options as the Smart LandingTM and Smart RunwayTM surface awareness and advisory systems.

The large Legacy 650 entered service in 2010. Based on the successful Legacy 600 platform, it provides longer trips for up to 14 passengers, while maintaining the same level of comfort. Its range of 3,900 nautical miles (7,223 km) with four passengers, or 3,840 nautical miles (7,112 km) with eight passengers, both with NBAA IFR fuel reserves, means that the aircraft can fly nonstop from London to New York; Dubai to London or Singapore; Miami to São Paulo (Brazil); Singapore to Sydney (Australia); or Mumbai to Central Europe.