Emirates touched down in Baghdad today, marking its first flight to the capital city of Iraq.

Passengers onboard the flight to Baghdad made good use of Emirates’ extensive network connecting through Dubai from a number of global destinations such as; Australia, England, the US, India, Pakistan and the UAE. Amongst the passengers onboard the inaugural was Ahmed Khoory, Emirates’ Senior Vice President Commercial Operations, Gulf, Middle East and Iran with his special 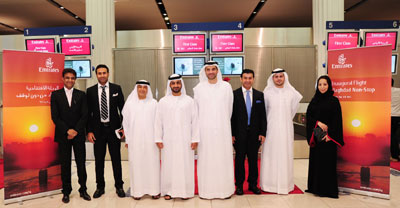 On landing in Baghdad the aircraft received a water-cannon salute before local Iraqi media attended an official welcoming ceremony and press conference inside the airport terminal.

“Baghdad holds significant potential for Emirates given the city’s mandate to rebuild,” said Mr Khoory. “As seen from today’s flight Baghdad is an important destination for many of our markets, with a good mix of leisure and trade traffic travelling into the capital from more than a dozen international cities. We have been working closely with the GCAA to make this destination possible for our passengers and it is gratifying to finally be here.”

Baghdad is the second destination that Emirates has launched in Iraq this year, with Basra successfully launching in February.

“We are seeing robust booking levels in both directions for Basra and expect the same level of interest for Baghdad. These markets are high revenue generating making them key destinations for the airline,” added Khoory.

In October Emirates visited Baghdad for a pre-launch roadshow with a strong turnout from local businesses and key Iraqi Government Officials.

Emirates is operating an Airbus 330 between Dubai and Baghdad, in a three-class configuration. EK941 departs Dubai at 07:55am touching down at Baghdad International Airport at 09:40am the same day. At 11:35am, return flight EK942 will depart Baghdad arriving in Dubai at 14:55pm the same day. The service will operate on a Wednesday, Friday, Saturday and Sunday.

The airline currently has a fleet of 162 aircraft and is the largest operator of both the Airbus A380 and Boeing 777. Over the next six months, Emirates will launch a further seven destinations including; Rio de Janeiro, Buenos Aires, Dublin, Lusaka, Harare, Seattle and Dallas.