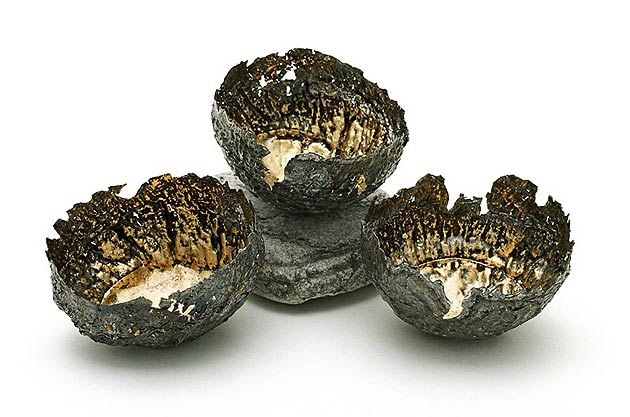 Walking into Claire Malet’s studio feels strangely like stepping back outside again. Like a breath of fresh air, the rural Hertfordshire fields and streams which surround Malet’s workspace seep through the studio walls and trickle across the work surfaces and walls. A tumble of pebbles takes over one table, deep burgundy berries resonate warmly on a piece of dark slate, a filigreed real holly leaf exhibits its complex skeleton, backed on white card. It’s an inspiring and organic mix of the natural and the hand-wrought, perfectly encapsulating the ethos at play in much of Claire’s work. 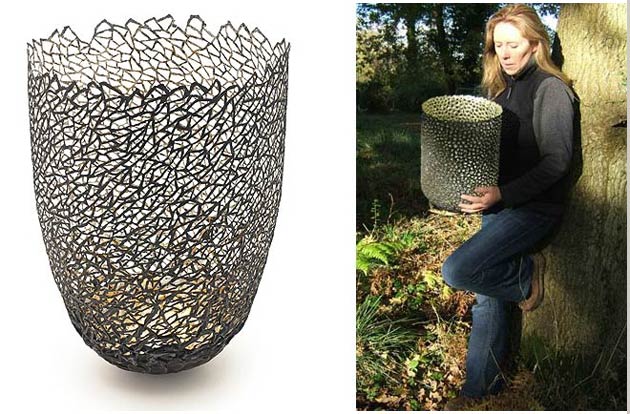 Adorning the studio walls are photographs and sketches taken and made by Claire on her daily walks through the Hertfordshire countryside; fecund twisted roots at the base of a tree, lichen and moss standing in macro like tiny forests, intricate crystals of ice etching the edge of a stream. Observing these images through the double lens of camera and artist allows the viewer to trace the almost alchemical transformation of rich, natural transience to cool, airy, permanence that takes place in Claire’s delicate metalwork.

The artist herself refers to the small pieces of inspiration which fill her studio as “fragments – seeds, sketches, relics” and she has a strong gut connection to these natural treasures which push her to create. She has an equally potent natural bond with the metals she works with. Claire is a masterful metalsmith, working intuitively and sensitively with copper, steel and silver to derive greater and greater feats of artistic expression. 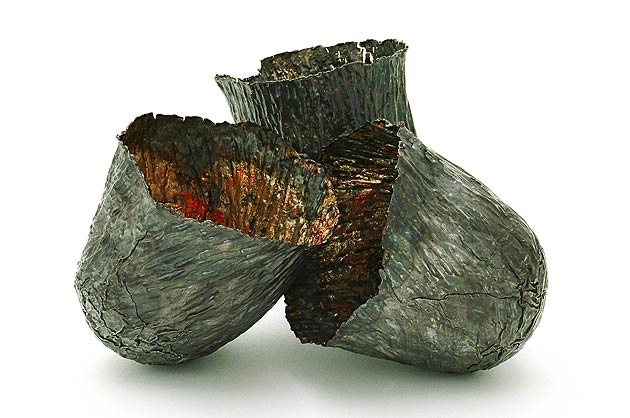 As one of the very few British craftspeople invited to exhibit at South Korea’s increasingly prestigious Cheongju International Craft Biannale in September this year, Claire’s work is receiving significant international acclaim. She has recently been showcased at two major US galleries, is regularly featured at Bicha Gallery and has shown at international art fairs including Art Toronto. Next year Claire is looking forward to putting together her first large scale installation.

After a stint at London’s Saatchi Gallery (to which she will return in 2014), Claire is now preparing to exhibit at the intimate Nina’s House in Chelsea from 6th December 2013 – 5th January 2014. Surrounded by Nina’s beautiful furniture, with its own organic, earthy weight, Claire’s work should take on even more natural resonance and glacial beauty.