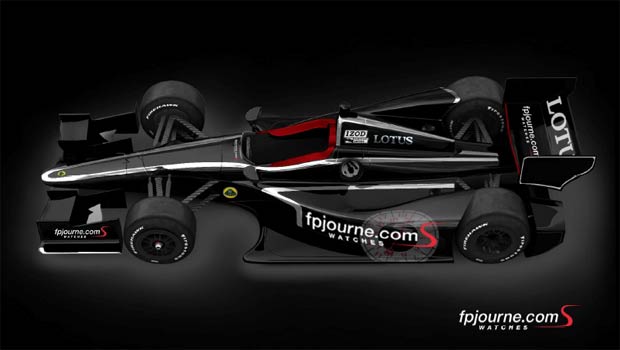 Dany Bahar said: “This May, Formula One legend and Group Lotus ambassador Jean Alesi is taking on a stirring new challenge – to race in the Indianapolis 500. Lotus, of course, has a glorious history at the 500 having won it with Jim Clark in 1965. His Lotus 38 was the first midengined car to ever triumph at the Brickyard. Lotus returned to IndyCar last year and has stepped up its involvement in 2012 by manufacturing its own engine and powering no less then five cars. Innovation has always been key to Lotus’ DNA, and it’s something shared by Lotus’ newest partner, Swiss watchmaker F.P.Journe. The shared values help to explain why the exclusive watchmaker’s decided to support Lotus and Jean with his first Indy outing. In addition to partnering with Lotus for the Indy 500, Jean Alesi will be wearing the F.P.Journe Centigraphe Sport watch, the first all-aluminium mechanical wristwatch. At just 55 grams, its lightweight philosophy is perfectly in line with Lotus, and its high-tech aluminium alloy is normally found in aeronautical engineering and Lotus’ acclaimed chassis technology”.

On 27 May 2012 the legendary Indianapolis 500 will witness a double grand premiere: Jean Alesi will race at the Brickyard for the first time in his celebrated career, wearing the Centigraphe Sport on his wrist, and F.P.Journe will be emblazoned on the side of the black-and-gold Lotus.

This partnership between watchmaker F.P.Journe and Lotus will promote the launch of the F.P.Journe lineSport, and marry the shared values of these two companies: Innovation, precision craftsmanship, performance, exclusivity, and lightness through its use of aluminium.

When Lotus won the 1965 Indianapolis 500, it was the first time a mid-engined car had triumphed, a layout long-since copied by every other constructor. F.P.Journe is bound to set the same trend in building the first all-aluminium wristwatch. The partnership will also cement the history of two friends from the south of France who met through a love of beautiful technology – Jean Alesi and François-Paul Journe. The Indy 500 has been held at the Indianapolis Motor Speedway on the Memorial Day weekend every year since 1911. It is the fastest motor race in the world, with cars reaching speeds of 400 km/h, and averaging over 380 km/h. It is also the benchmark for American auto-racing, due to its exceptional 500-mile length, the nature of the 2.5 mile track, and the huge passionate audience in the stands and watching at home.

The oval shape of the Speedway, which accommodates a sell-out 400,000-strong crowd, means that there are no chicanes as on Formula One tracks. The driver slows only ever-soslightly for the oval’s four large turns despite minimal aerodynamic grip compared with its F1 cousin. It is extremely intense, even compared to the pressure of a Grand Prix with which Jean Alesi is so familiar. The Frenchman raced in F1 between 1989 and 2001, winning the 1995 Canadian Grand Prix and finishing on the podium 32 times.

F.P.Journe is thrilled and inspired by Jean’s new racing challenge and is certain that the alliance of prestigious watch machinery and a fast racing car will result in an Indy 500 to savour.