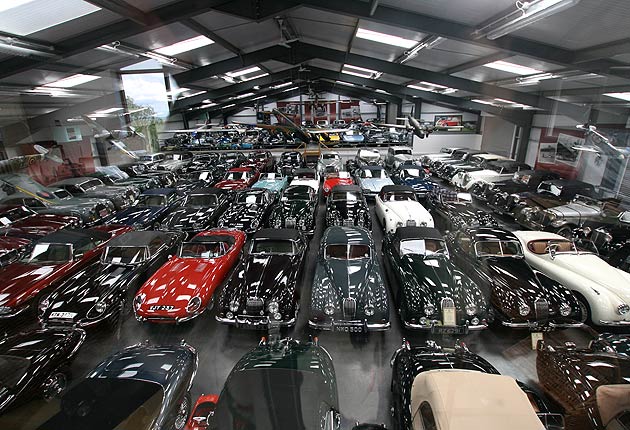 James Hull, owner of Britain’s largest, privately owned, award winning collection of cars, has announced that he is in search of a new home for his 457 British classics, estimated to be worth £100Million.

Cars, particularly classic cars are extremely popular with readers of Luxurious Magazine, so when we found out that James Hull was going to sell his huge collection we just had to take this opportunity to tell you more. To most automotive fans, classic cars are nothing more than a life-long fantasy, the most common reason quoted for not buying one is the maintenance and upkeep. Buy a modern-day Jaguar, BMW or Mercedes and it is pretty certain that should anything go wrong you can find a local garage or dealership to help out, buy something that is rare and requires specialist maintenance then that is a different matter. Deep pockets or a lot of passion and good mechanical skills can overcome this but let’s not remove any dreams and enjoy the fact that some of the greatest motoring classics are coming to the market and whether you’re a dreamer or collector, you can own one.

Many of the vehicles in the James Hull collection have their own rich history and celebrity lineage. Including a Mini Traveller owned by the late Lord Mountbatten, which was offered to a young Prince Charles; a Bentley formerly owned by Elton John; Keith Floyd’s ‘Woodie’ Traveller; a Humber belonging to the judge presiding over the Profumo Affair; and a 1961 E Type Jaguar owned by Britain’s world motor cycle champion Mike Hailwood, complete with a Donnington medal. A car owned by Winston Churchill offered up a heavy wooden box containing silver maps of France, allegedly given to Churchill by Roosevelt.

Hull’s of cars covers each decade from the 1930s to the present day, reflecting the history of the British automotive industry. It ranges from the first 1961 Jaguar E Type roadsters to a Sir William Lyons Jaguar Mk10 which sits alongside many other unique and rare SS models. Two 1954 Bentley Mulliner R Type Continental fastbacks are flanked by an Alvis Super Graber convertible and an Allard “woodie” station wagon. Add to this a Sinclair C5 and the eclectic nature of the collection becomes apparent.

Hull has travelled extensively around the world tracking down some of the rarest, original British models, shipping them back to the UK where they are disassembled (down to the smallest nut and bolt) before being restored, repainted and re-assembled by his team of mechanics. This process, requiring extensive research to source original components and fittings, takes typically 3 years per car and has ensured the vehicles in this collection are world renowned for their quality and integrity.

The collection has made appearances at many high profile automobile events including the Queen’s 80th Birthday parade, Italy’s ‘Mille Miglia’ car rally and Jaguar’s “Bloodline” Tour of China. It has also played a part in the Goodwood Festival of Speed and Geneva Motor Shows as well as appearing at the Beaulieu National Motor Museum.

Who is James Hull?

He’s a dentist, entrepreneur and philanthropist who has battled and survived cancer on three occasions in the past four years, earning him the nickname ‘Lazarus’ among friends and family. While his desire to find and restore old classics remains undiminished, given his health problems he now feels it is time to identify a like-minded partner to carry on the “mission”. Hull says “I’m merely a passionate custodian of this hugely significant part of British history and, with luck, I will succeed in finding a home that can not only be enjoyed and treasured by the British public but also be admired by visitors from across the world. It will be memory-evoking display. It’s the culmination of a life-long hobby. Each car has its story and all have played a part in the history of British motoring. It is part of our heritage.”

While Hull, who has been amassing these cars for 35 years, is keen for the collection to remain in the UK, there is significant interest from overseas buyers. In the UK he is in discussions with a number of potential suitors including 5 Local Enterprise Partnerships (Cardiff, Hereford, Birmingham, Bristol and Wales) hoping to create a purpose-built, world class, affordable, family entertainment destination.

It is supplemented by an assortment of 365 original pedal cars spanning the same period, a selection of working model aircraft and a range of industry memorabilia. Hull describes it as a “living memory collection” inspired by childhood memories of his grandfather’s Jaguar and father’s Alvis. While prestige models dominate, including a number of ultra-prestige Vandan Plas and continental models, there is a proliferation of other classics such as the famous ‘woodies’, produced by the likes of Austin and Alvis, as well as a fantastic assembly of Triumphs, Morris Minors, Standards, Rileys, Wolseleys and Mini Coopers. There is also a memory evoking collection of British campervans from the 40s, 50s and 60s, and within the 4×4 section early Land Rovers and pristine classic Range Rovers.

Asked what he will do with the empty warehouses once his beloved cars have gone, he says “I’m a collector, so who knows what will turn up next! My wife hopes it will be something smaller like stamps!”