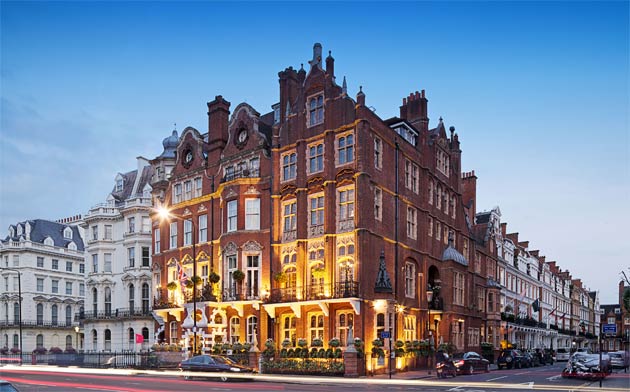 Editor, Simon Wittenberg, looks back at a magical stay in the beautiful English country mansion which offers panoramic views stretching over Kensington Palace Gardens in London. 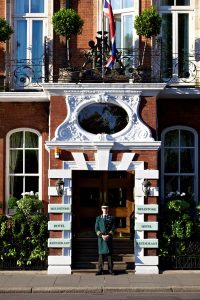 The Milestone Hotel is an architecturally-magnificent five-star Grade II listed award-winning member of the Red Carnation Hotel Collection (founded by Bea Tollman who we had the pleasure of having dinner with earlier this year) which lies adjacent to Kensington Palace in London.

The boutique hotel takes its name from the old cast iron milestone which stands outside of the 1880s building (marking the number of miles to London and Hounslow) which was formerly used as an academy for young gentlemen and a private lunatic asylum. Fully restored in 1999 to a haven of luxury, The Milestone today houses just 44 deluxe rooms, 12 suites and six luxury apartments which vary in size from 750 to 1,100 square feet.

“No request is too large and no detail is too small,” says the marketing blurb, and this is absolutely spot on as guests are treated like VIPs throughout their stay as every need is tended to. This exceptional level of care and attention is partly due to The Milestone’s unique and very thoughtful “Guest Preferences Form” which is sent to every visitor prior to their stay. This requests information such as dietary requirements, your favourite pillows and cocktails, whether you want a Bentley to collect you from the airport and any meal reservations needed. This means that all staff throughout the property, from the chefs to the concierge, know exactly what every customer likes and wants, as well as what to avoid.

We stayed in the large £857-a-night Viscount Suite (one of the hotel’s seven individually-furnished Junior Suites) which is decorated in cream, brown and gold tones that blend seamlessly with soft furnishings and artwork containing dashes of red, green, blue, yellow and subtle patterns.

Sitting next to the suite’s very own staircase, an ornate four poster king size bed with draping curtains, soft cushions and a neutral fur throw is perfectly positioned to admire the manicured gardens of the nearby royal residence from the large leaded windows. This is joined by a luxurious velour chaise longue at the foot of the bed. Artwork depicting ‘At The Concert’ by Pierre Auguste Renoir hangs gracefully on the wall, reflecting nobility of past ages and sketches and drawings provide historical interest in costume and dress. Mod-cons in the room include a writing desk with a BOSE iPod docking station, large flatscreen TV (complete with Internet TV), tea and coffee making set and a fully-stocked mini-bar.

The spacious ensuite bathroom is dressed in brown marble and lined with a substantial selection of fragrant Penhaligon’s toiletries. The crisp white bath comes complete with two soft gowns, a powerful ceiling shower and a large selection of towels emblazoned with The Milestone’s elegant gold ‘M’.

Away from the comforts of the room itself, there are plenty of areas to relax and unwind, starting with the Health Club and Spa. The resistance pool is ideal for a leisurely swim, but for those wanting a good workout, this is best left to the well-equipped gymnasium. There is also a small sauna for those who want to lie back in the heat and a selection of treatments courtesy of the in-house therapist, Fiona Keane. 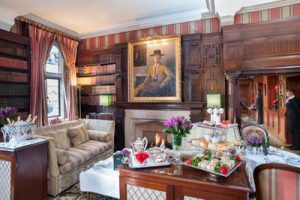 When it comes to dining, there are a number of options available to guests: The first is the exquisite Park Lounge, a drawing room-type venue which has a quintessentially British atmosphere and is very popular for those wanting to savour The Milestone’s award-winning afternoon tea. Next is the Stables Bar (taking its name from the original use of this part of the building) which brings a cosy atmosphere and a comprehensive menu of cocktails and champagnes, and lastly, there is the bright and airy conservatory which sports a black and white colour scheme. Sitting in the latter and accompanied by a good selection of nibbles such as cheese toasts, twiglets, caramelised nuts, olives and cheese sticks, we enjoyed the complementary arrival beverages of Caiprinha and Dolomite Sunset (one of The Milestone’s Signature Cocktails) which were concocted by the bar’s expert team.

Following the wonderful pre-dinner beverages, we made our way to the hotel’s renowned Cheneston’s restaurant which takes its name from the original pronunciation for the borough now known as Kensington. Furnished with mahogany half-panelled walls and original cartoons by Sem, it’s a compact 20-cover eatery with a separate eight-person annex called the Oratory. On offer at Cheneston’s is an à la carte menu themed around international cuisine with a particular emphasis on modern British fare. 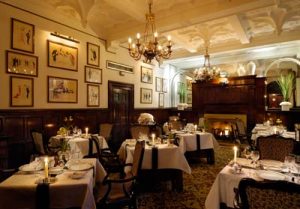 We opened the meal with a basket of sorted bread with a slate bearing five different types of butter, namely sun-dried tomato, lemon and parsley and salted to name but a few. This was joined by amuse-bouches of cauliflower velouté and smoked duck consommé which set our palates up nicely for what was to come. After around 30 minutes of sitting down, it was time to try our starters which were simply heavenly. My choice was Ceviche of salmon, tuna and halibut (£16) which came in the form of a trio of finely cut slices of marinated fish topped with small croutons. This dish simply melted in my mouth such was the beautiful texture. My partner had Mrs Tollman’s signature chicken noodle soup accompanied by some small puff pastries (£10.50) which was equally impressive.

For the main course which followed in quick succession, I went for the moist piece of pan-fried line caught sea bass which sat on a bed of samphire and peeled cherry tomatoes (£27), accompanied by a side of wonderfully creamy mashed potato. My partner chose the generous char-grilled 6oz Kobe fillet steak with hand-cut chips and truffle jus (£42). Cheneston’s wine list boasts over 300 different varieties and we sampled the deliciously fruity 2013 Bouchard Finlayson Sauvignon Blanc from Walker Bay in South Africa.

For the closing chapter of our dinner, we opted for the classic apple tarte tatin served with Cornish clotted cream (£9) and “Textures of Summer Berries” (£10), which translated as a combination of summer fruits on a bed of raspberry soup interspersed by finely chopped pieces of honeycomb. Both were divine. A strawberry consommé and hot chocolate drinks rounded off the meal.

Back in the Viscount Suite and the nightly turndown service sees the placing of a gift (a small selection of fudge) on the bed, the blinds closed and some mellow music on the TV. In the bathroom, a candle is lit by the bath to create a warm and romantic ambiance, the perfect end to a memorable evening.

Come the morning and breakfast is another gastronomic experience in the Cheneston’s restaurant. The continental buffet (£19.50 per person) is a feast for the eyes, offering everything from cereals to nuts to cheese. For an additional £7, guests can have a traditional English breakfast which includes the former plus numerous hot options such as grilled Scottish kipper, French toast and a three egg omelette.

The Milestone Hotel really does go the distance to make sure that everything is just right and is also perfectly placed to enjoy some of London’s most famed landmarks.

For further information or to make a reservation, visit www.milestonehotel.com.

See more of the Milestone Hotel by clicking an image below