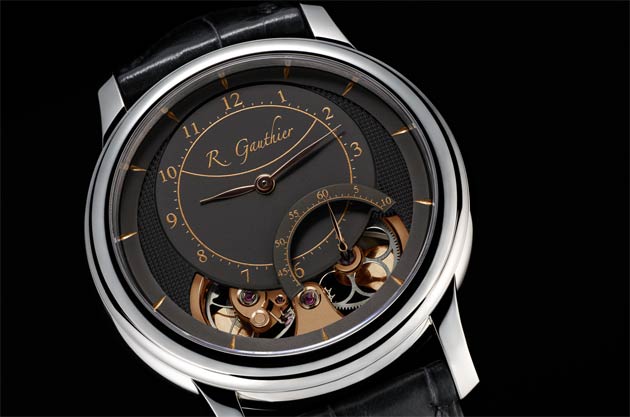 The dial of the Romain Gaultier HMS Ten is a harmonious composition of circles and arcs. Inside the chapter ring, there is the smoothly finished, off-centre hours-minutes subdial bearing the R. Gauthier logo and flanked either side by a Clous de Paris.

On the lower portion of the subdial, sectorial seconds allows visual access to the movement below, with the balance wheel and distinctive gear driving the seconds on show. The three parts of the dial are fixed invisibly from beneath, lending clarity and classicism to the displays.

“With HMS Ten, supreme legibility was paramount,” says Romain Gauthier. “My idea was to have a dial with completely unobstructed views. Once the eye is drawn to the hour-minute subdial, it is then naturally attracted to the sectorial seconds. Nothing disturbs the wearer’s reading of the time.

“Such a timeless, elegant dial design came to me naturally because I was born in the heart of Swiss watchmaking, the Vallée de Joux, and was constantly exposed to classic, historical dial design as I grew up there.”

The graceful 41mm diameter case of the Romain Gaultier HMS Ten is distinguished by pure, clean, unbroken lines around its full perimeter. However, it is the absence of a normal crown that reveals just how remarkable the movement is.

Placing the crown flat on the caseback increases winding efficiency because energy does not need to be transmitted through 90°. It also reduces wear and stress on components. The large diameter of the crown also enables the watch to be easily wound, even while on the wrist.

While the dial side treats the observer to a partial view of the movement – which was entirely conceived, developed, designed, produced, assembled and regulated by Manufacture Romain Gauthier – it is through the display back that this in-house calibre is fully showcased, with virtually every component bearing Roman Gauthier’s distinctive touch.

The Vallée de Joux style finger bridges catch both the light and the eye with their seductive polished curves. The bespoke gear wheels feature circular arms providing both elegance and strength; the polished screw heads bear a unique S-slot, enabling more torque to be applied and aesthetic.

With its distinctive curved arms and calibrated eccentric weights, the balance wheel has been designed and manufactured by Romain Gauthier. The regulator even features a high-efficiency triangular pallet lever, another Romain Gauthier invention.

The large movement bridge at the top has a cut-out revealing some of the mainspring barrel and ratchet click. The cut-out features four highly polished, sharp internal bevelled angles – this anglage is the hallmark of superlative hand finishing since machines are not yet capable of milling and polishing sharp internal angles.

Impressively, all components are designed, developed and manufacture by Romain Gauthier except for the mainspring, balance spring and jewels.

See the Romain Gaultier HMS Ten in more detail below