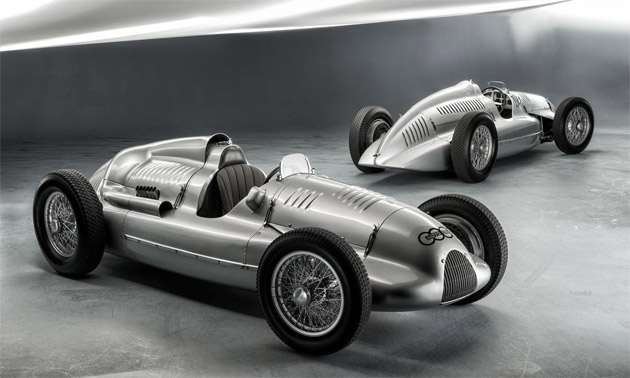 It is the Auto Union twin-supercharger Type D dating from 1939, and is one of the two legendary “Karassik cars”. AUDI AG now owns three of the five Auto Union racing cars that can claim to be original.

“This is one of the most emotional moments in our heritage work for AUDI AG – we have come full circle,” says Thomas Frank, Head of AudiTradition.

The Silver Arrow legend was born in the 1930s.
In 1934, Auto Union and Mercedes-Benz appeared on the international motor racing scene with German racing cars of totally new design, with a silver finish and futuristic appearance, and were immediately successful. Whereas Mercedes-Benz relied on conventional front-engined cars, Auto Union placed the engine behind the driver – the layout that is still a standard feature of today’s Formula One cars. The two manufacturers dominated racing on Europe’s Grand Prix circuits without serious opposition until the outbreak of the Second World War in 1939.

The 16-cylinder and 12-cylinder racing cars from Zwickau and Stuttgart captured one title after another, almost as if no other cars were competing. Drivers such as Bernd Rosemeyer, Tazio Nuvolari and Hans Stuck (Auto Union), Rudolf Caracciola, Manfred von Brauchitsch and Hermann Lang (Mercedes-Benz) are still acknowledged as heroes by modern motor sport enthusiasts: they often reached speeds of more than 300 km/h in races devoid of any serious safety precautions. On the long straights of the Avus circuit in Berlin in 1937, Rosemeyer’s car was timed at 380 km/h.2/4. 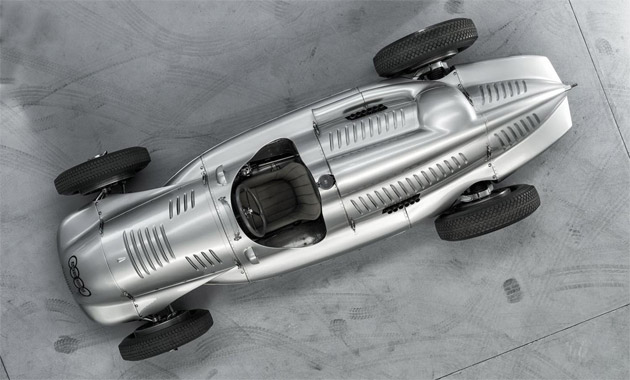 The Second World War put an abrupt end to what had become known as the supercharger era. Mercedes-Benz was able to rescue almost all its Silver Arrow cars after Germany’s total collapse, but fate was less kind to Auto Union. Zwickau was occupied by the Soviet Army, Auto Union was liquidated and the factories shut down. The Russian occupying forces found the Silver Arrows where they had been stored: in a mine building above ground. The cars were carried off to the Soviet Union as part of Germany’s reparation payments, and all trace of them was soon lost in that vast country.

The vehicles best able to pay tribute to Auto Union AG’s great motor sport heritage were thus regarded as irrecoverably lost by the new Auto Union GmbH (today’s AUDI AG) when it was established in Ingolstadt in 1949. The Cold War had already begun and the Iron Curtain was firmly in place. Only one Auto Union Type C remained accessible; it had been presented to the Deutsches Museum in Munich before the war, but was later damaged in a bomb attack there.

At the end of the 1970, the first rumours were heard to the effect that one of the long lost Auto Union racing cars had been located somewhere in the vast region of the former Soviet Union. Paul Karassik, an American collector of high-class classic vehicles, came to Europe with his wife Barbara, whose family came from Germany, and began to search for the car. As a small boy he had been a spectator in Belgrade at the last Grand Prix held before the Second World War – an unforgettable experience. Later, after emigrating to the USA and becoming a wealthy man, it proved to be useful to him in his search that he came from a White Russian family, had grown up in Serbia and spoke fluent Russian. It took more than ten years and numerous visits to the USSR before he tracked down the remains of two dismantled Auto Union cars in Russia and the Ukraine and, with great negotiating skill, was able to buy them.

This was followed by several hair-raising journeys, often at the wheel of a delivery van, before he was able to bring the parts out through the Iron Curtain to Western Europe. The engines, chassis, axles and gearboxes were then flown to Florida in the USA. In the autumn of 1990, Paul Karassik made initial contact with experts, including in May 1991 the AUDI AG Tradition department, which acted as advisors for the planned restoration. The Karassiks entrusted the rebuilding of their racing cars to the English company Crosthwaite & Gardiner, which already possessed the extensive know-how needed for the restoration of historic racing cars. 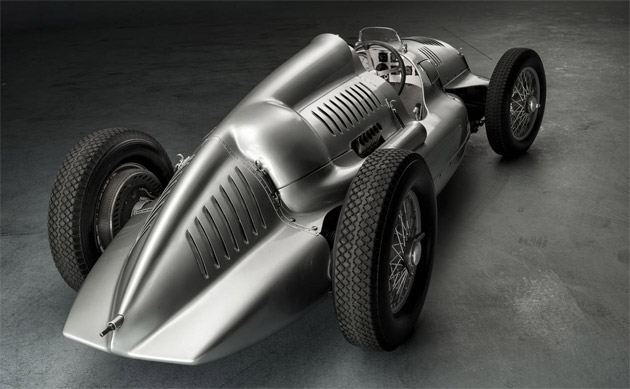 After detailed examination of the racing cars’ components, it was decided to rebuild a Type D single-supercharger racing car to 1938 specification, and a Type D racing car in the 1939 version with twin supercharger. In both cases a complete replica body had to be constructed, since no parts of the original bodies had survived. Rod Jolley Coachbuilding built the new bodies in England. In August 1993 the first of the two 3/4 racing cars, the one rebuilt to 1938 specification, was completed. A year later the twin-supercharger 1939 car was also “ready for roll-out”. With support from Audi, both cars appeared on the starting line for the first time since 1939: at the Eifel Classic at the Nürburgring on October 1, 1994.

In recognition of its support during the rebuilding project, Audi was able to exhibit the 1938 car in the years that followed; it was purchased by AUDI AG in July 1998. The 1939 twin-compressor car returned to Florida. In the spring of 2000, Paul Karassik sold the second car to a private collector: in 1999 he had hoped to see this Auto Union run again in Belgrade, 60 years after the last Grand Prix held there, but the Balkan War put an end to this dream.

Purchase of the Type D twin-supercharger car means that AUDI AG now owns all three Auto Union racing cars recovered from what was formerly the USSR. Thomas Frank, Head of Audi Tradition is delighted: “20 years ago we would never have dreamed that such a thing would be possible!” As well as the two “Karassik cars”, the collection includes the famous hillclimb car driven by Hans Stuck, the Auto Union Type C/D. This was on show at the Car Museum in Riga, Latvia, until just after the demise of the Soviet Union, and is today one of the outstanding exhibits at the Audi museum mobile in Ingolstadt. This is also where Audi plans to display the Auto Union Type D on a long-term basis. But first of all, the new acquisition is to make a notable guest appearance at the Goodwood Revival in England, from September 14 to 16. After 67 years, the latest homecomer from the former Soviet Union will form part of an impressive ensemble together with the Auto Union Type D racing cars first seen in 1994.