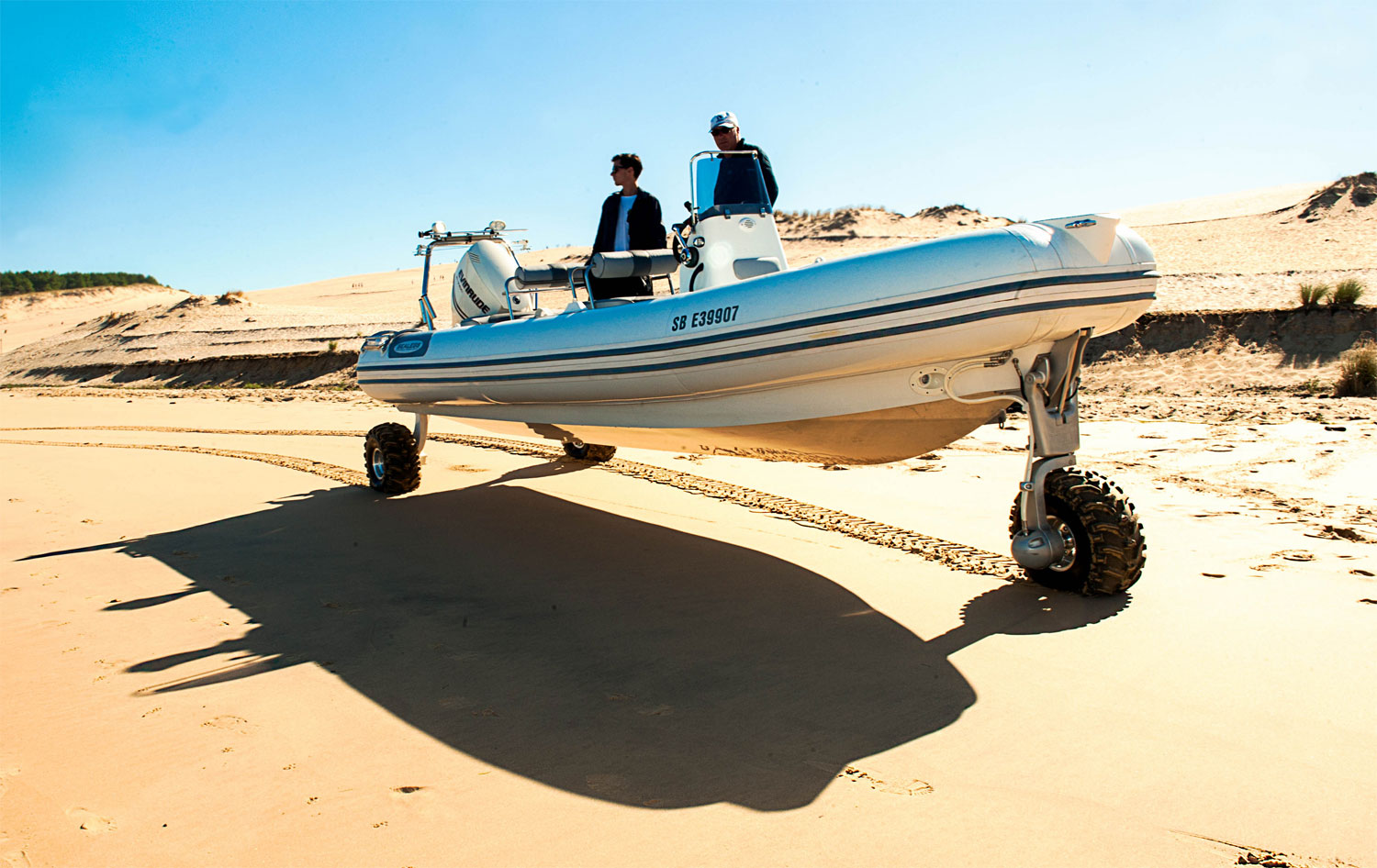 With motorised, retractable, steerable wheels, Sealegs amphibious RIBs change the game when it comes to launching and retrieving a boat. Thought to be the only one of its kind in Mallorca, this immaculate pre-loved 7.1 metre is now for sale with easyboats.

Lorenzo Vila, Director of 25-year-established easyboats, says, “Research says that Sealegs owners use their boat, on average, up to ten times more than they officially thought. It’s not surprising. The clever land-water design offers great freedom with no more offshore anchoring, no more boat beaching and no wet feet. An obvious target audience is private individuals with seafront homes who can make it ashore without the vehicle/trailer/ramp rigmarole, another is commercially-minded beachside bars and restaurants, such as Nikki Beach, who’d rather their VIPs didn’t get wet en-route. Sealegs also make great superyacht tenders. The Duke and Duchess of Cambridge used a Sealegs during their 2014 New Zealand Royal Tour – if it’s good enough for royalty… I think she’ll be sold at first sea trial.”

Sealegs is a New-Zealand-based company which set up in 2003 to cater to both recreational and professional (coastguards, military) markets. Its recreational boats are designed for family fun and adventure and are ideally suited to young children, who are safer inside the boat during launching and retrieving, and for older people who find it tough to manhandle boats onto trailers and ramps. 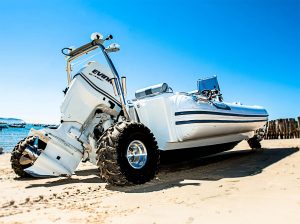 Also, with launch taking just a few moments, boaters can seize small windows of opportunity of good weather to go for a blast across the water – and then drive back onshore for a glass of something at a beach club.

In-water, the boat is driven and used as normal with a responsive hull delivering a smooth top speed of 74km/h. However, on approach to shore she makes conventional RIB (or indeed any other motorboat) owners go green with envy. Simply throttle back to idle, tilt up slightly, hit a button and deploy the three retractable ‘legs’. They’re down in about ten seconds and then the Sealegs can be driven ashore (up to 25-degree grades of sand, rocks, mud) at a more-than-satisfactory 7km/h. The front of the RIB lowers to an easy clamber-off level for disembarkation. It’s a shame Sealegs aren’t street legal…

For Sale With easyboats – 7.1-Metre Sealegs RIB
One owner since new (June 2013), this 7.1-metre RIB has just 60 hours on the clock. With seating capacity for eight adults (in and out of the water) she has plenty of underfloor and locker storage and a Yamaha 150hp engine.
Price – 150,000 euros (tax paid)

See more of the Sealegs Amphibious RIB below: