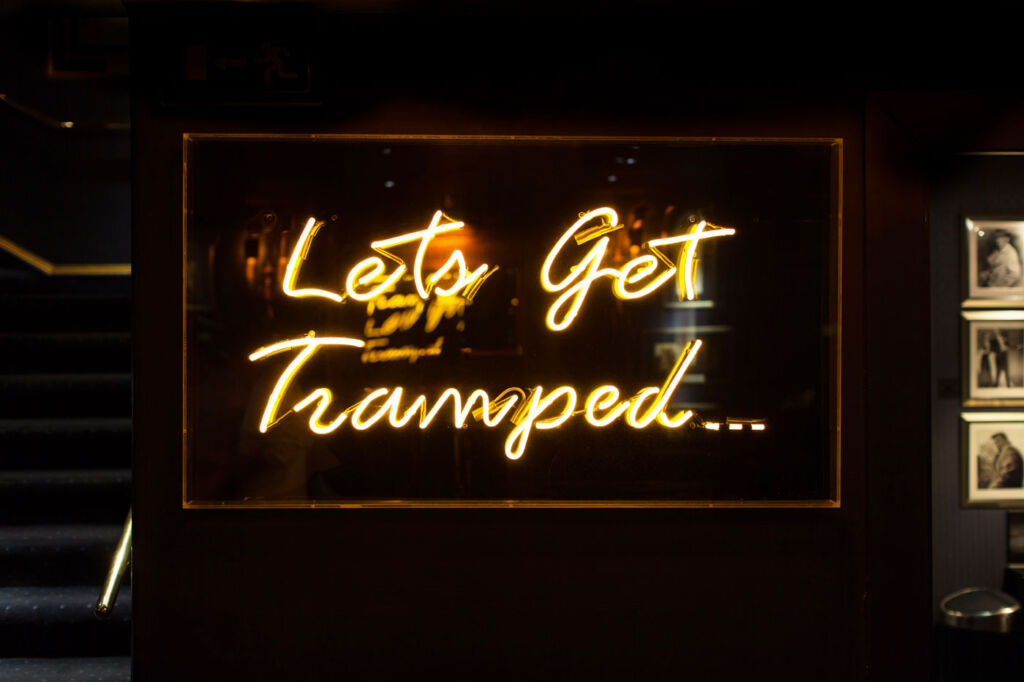 We step inside one of London’s most exclusive and longest standing members’ clubs, Tramp, in Mayfair.

When it comes to private members’ clubs, as Londoner’s, we’re spoilt for choice. But Tramp, located on Jermyn Street in swish Mayfair, is arguably the most legendary of them all.

A members’ club that rarely opens its doors to those with status not less than royalty or A-list, we were invited in for dinner and drinks, and to discover what makes this club so esteemed. 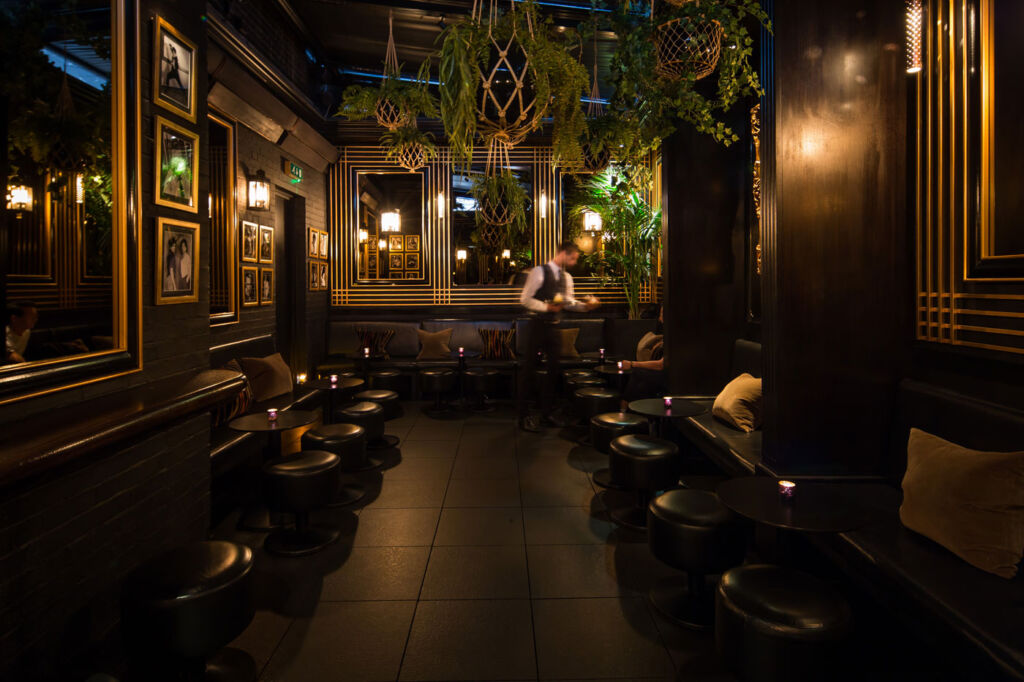 History
Tramp was and still is, the place to be seen by anyone who’s anyone.

The members’ club has played host to legends both living and dead, including the Beatles and the Rolling Stones, Jackie Collins, Michael Cane, Michael Douglas, Kate Moss and many more – the latest being Rihanna and her 150-strong entourage.

Our host revealed that Princess Margaret regularly visited the club via a now blocked underground passageway leading to Buckingham Palace.

The club, which recently celebrated its 50th birthday, was originally thought up by Oscar Lerman, Bill Ofner and Johnny Gold and got its name from a famous Charlie Chaplin character. 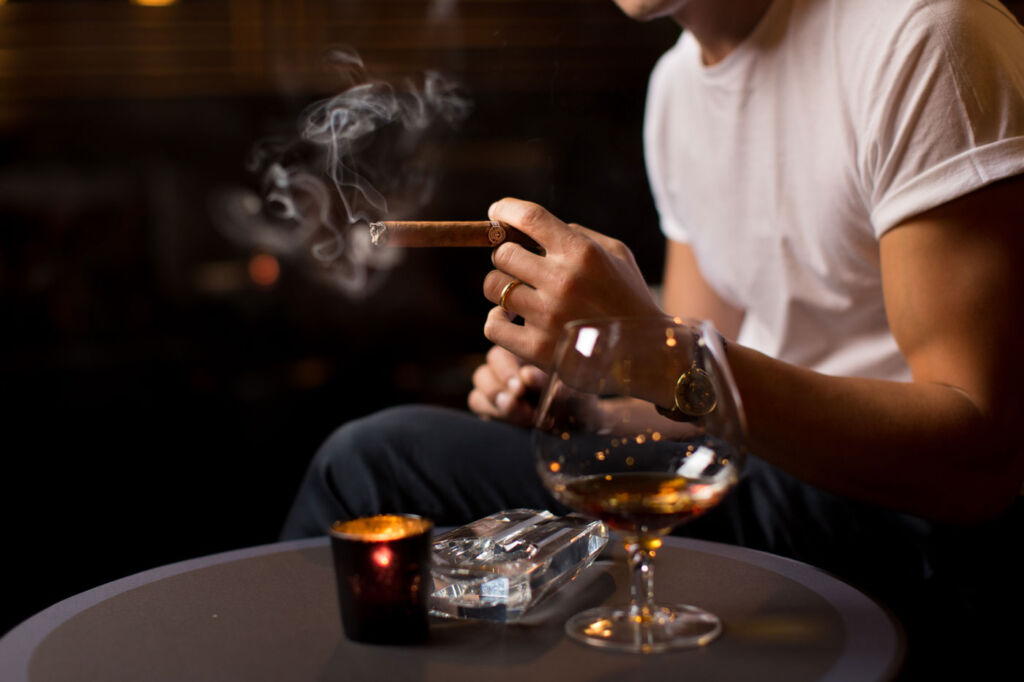 There are many tales of debauchery etched within Tramp’s history, some of which were revealed to us during our visit but as the saying goes, ‘what happens in Tramp stays in Tramp’ so we’ll leave the rest to your imagination. 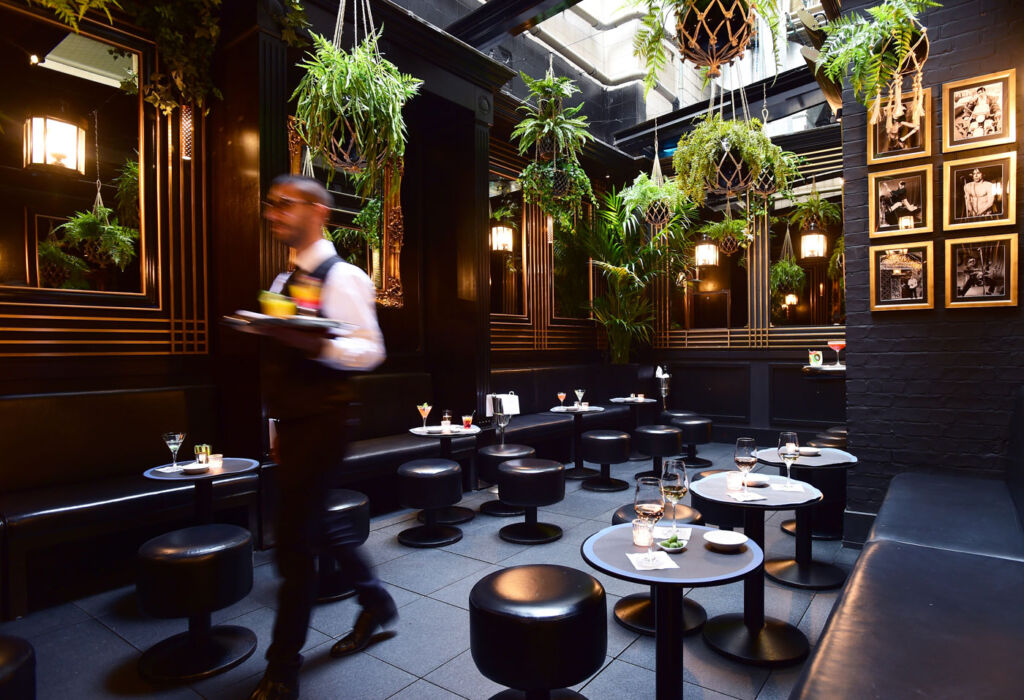 Gaining access
Back in the 70s, getting through the doors of Tramp was all about who you knew. And that same policy stands today so you’ll need more than a 100,000-strong Instagram following to get in.

The Tramp team honour the original membership fees for its oldest members, with the longest standing paying £7.50 a year. Today, membership will set you back £1,000 a year, which isn’t too steep considering the calibre of the club. 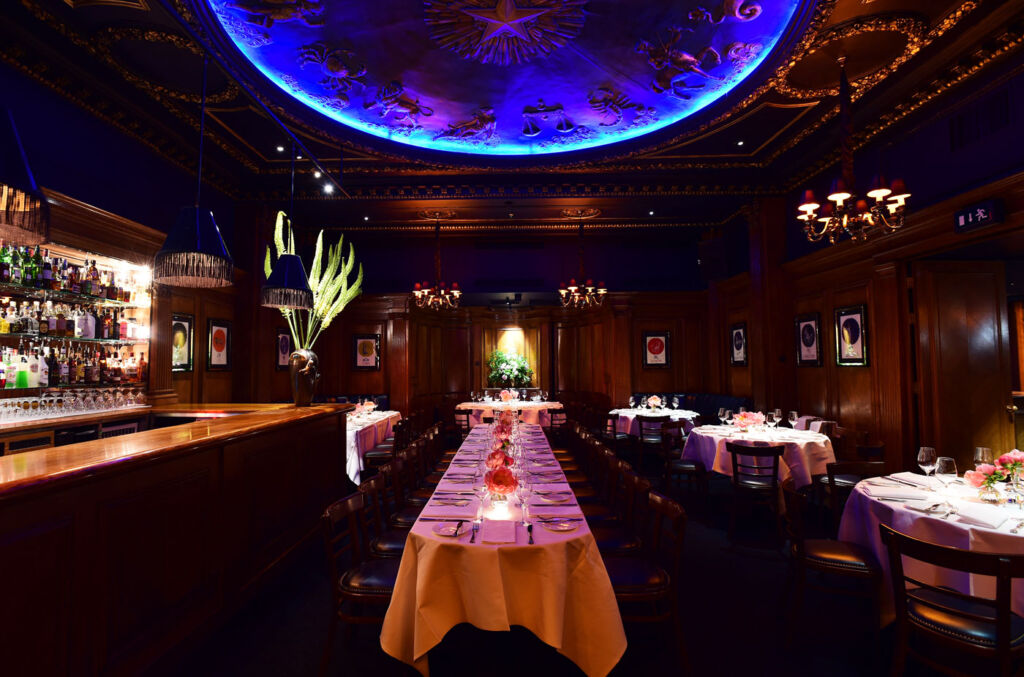 Dinner, drinks and décor
The Tramp way of doing things (AKA ‘getting Tramped’) goes something like this: cocktails and shisha on the Terrace, live music and DJs in the Disco room, followed dinner in the Zodiac Room – and back to partying afterwards if that’s your style.

The club is licensed until 3 am so guests can, and do, stay until the early hours.
Tramp is committed to retaining its original Art Nouveau design. The glistening crystal chandeliers, ornately carved oak panelling and magnificent stucco Zodiac ceiling are all as they were. 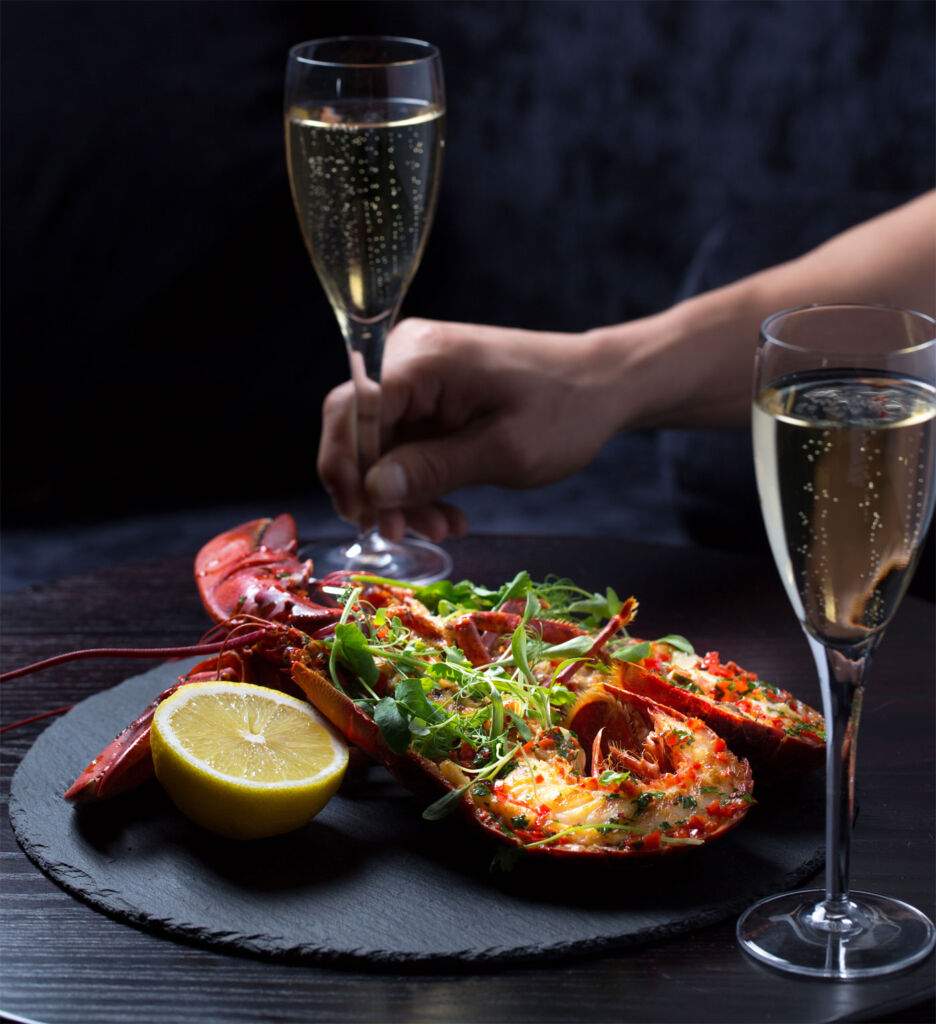 The food is exquisite, with an Asian inspired menu that’s suited to pre-party fine dining and those late night munchies. The burger – a regular 3 am order of Joan Collins – has been on the menu for 50 years boasting a top-secret ingredient. Though we couldn’t quite work out what that ingredient was (something tangy perhaps?) we can vouch for this being one of London’s tastiest and heftiest burgers.

The beef tataki starter was another highlight – artistically plated and simply divine. So too was the lobster and squid ink tagliolini, which certainly didn’t skimp on portion size.

The large wine list boasts both Old and New World options and the cocktails are some of London’s classiest. 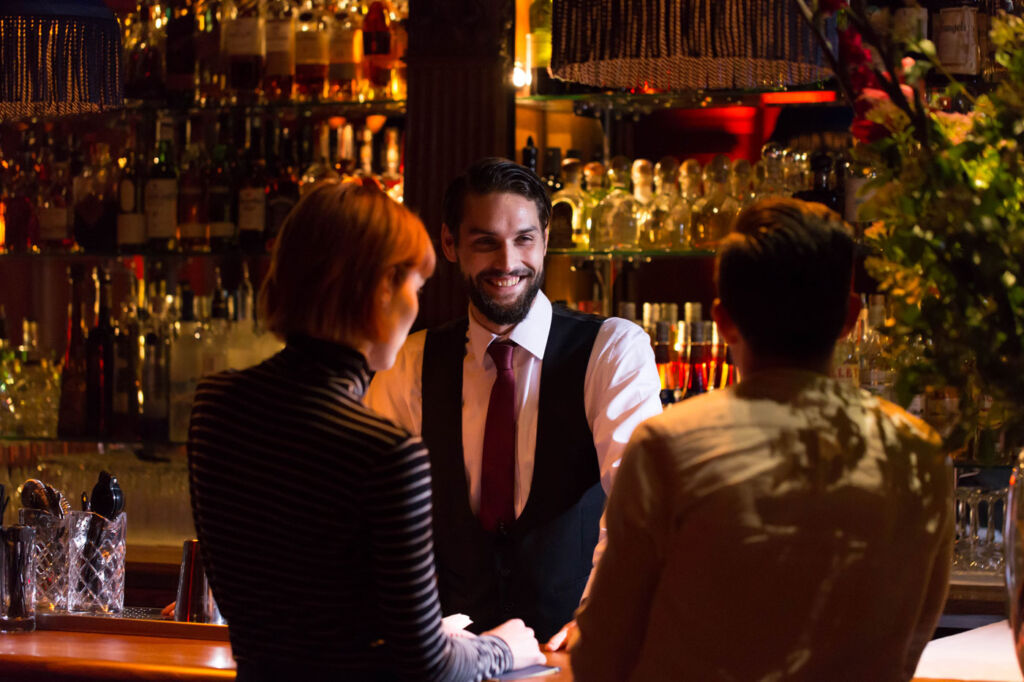 The service is excellent too, with all guests receiving VIP treatment, which is personalized and discreet where necessary.

Next time you’re thinking about getting trollied, why not get ‘Tramped’ instead? That is of course if you can get in. 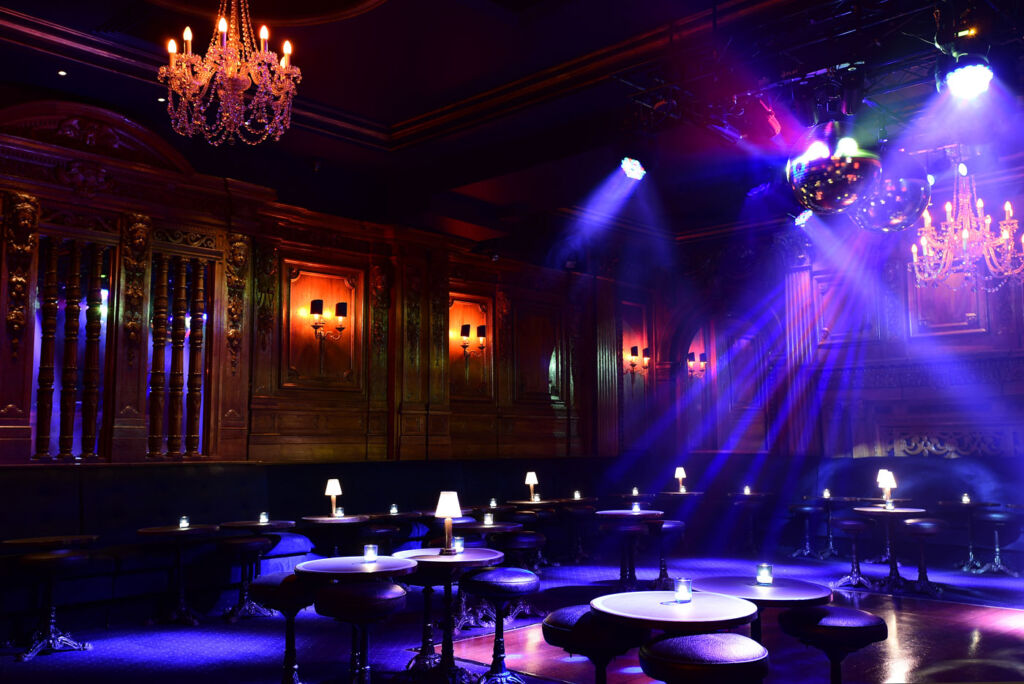