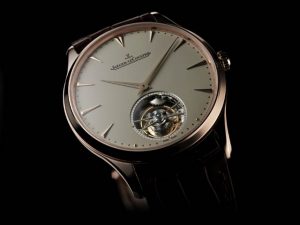 At the SIHH 2012, the Manufacture Jaeger-LeCoultre presented three new timepieces in its Master Control line, which is celebrating its 20th anniversary. It was indeed in 1992 that the Grande Maison in the Vallée de Joux introduced this classically inspired line named after a merciless set of tests, the 1000 Hours Control, introduced that same year in order to guarantee the reliability, the sturdiness and the precision of its timepieces, even in the most extreme conditions.

Since 1833, watchmaking inventiveness has had a firm home base in the Vallée de Joux. That was the year the brilliant young Antoine Lecoultre founded his own establishment in Le Sentier, dedicated to the production of horological components. He had just developed a revolutionary machine designed to cut pinions, a key element of watch mechanisms. It represented a decisive breakthrough that paved the way for movement standardisation and series production. This first venture off the beaten track set an invaluable precedent, and remains an enduring source of inspiration for the founders’ successors. Antoine LeCoultre did not take the success with which his first efforts were rewarded as an encouragement to rest on his laurels – quite the contrary. 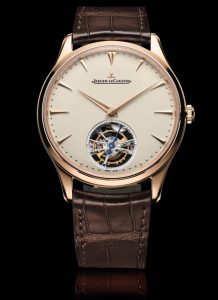 He extended production to encompass other timepiece components and constantly sought out new means of enhancing production quality. Barely ten years went by before he developed the millionometer, the first instrument capable of making micron-accurate measurements corresponding to one millionth of a metre. The invention was to have a considerable impact in that, as well as ensuring greatly improved precision, it also served to incorporate within pocket-watches certain horological complications that previous generations could only dream of. The new accomplishments generated great enthusiasm and the Vallée de Joux, the cradle of Fine Watchmaking, soon earned the nickname of the “Valley of Complications” – a title that has remained unchallenged ever since.

Master Ultra Thin Tourbillon, the hegemony of the tourbillon

The pink gold case frames a dial on which the observer’s gaze is inexorably drawn towards the tourbillon at 6 o’clock. This imposing and majestic device testifies to the exceptional precision of the Master Ultra Thin Tourbillon, as well as to the inventive strength of the Manufacture that propelled the tourbillon, invented in the latter years of the 18th century, firmly into the 21st century. In 2004, the Gyrotourbillon caused a sensation by introducing the world’s first spherical tourbillon. Four years later, the Grande Maison in the Vallée de Joux unveiled the Reverso Gyrotourbillon, the first three-dimensional tourbillon to feature a cylindrical balance-spring. Barely twelve months later, Jaeger-LeCoultre presented the Master Grande Tradition Grande Complication combining a flying tourbillon and celestial indications in the form of a sidereal zodiac calendar. This extraordinary range of inventions is of course anything but coincidental.

Six years ago, the Master Tourbillon returned to the roots of the tourbillon, of which the primary function consists in optimising the precision and the reliability of a timepiece by compensating for the detrimental effects of gravity on the regulating organ. Its tourbillon is distinguished by its generous dimensions and its high frequency of 28,800 vibrations per hour, which remains a rarity for a tourbillon movement. It also features a diaphanously light titanium carriage weighing a mere 0.33 grams and representing an undeniable asset in reducing the energy required by a barrel that is wound by a rotor mounted on ceramic ball bearings. This high-precision instrument won first prize in the Chronométrie 2009 international timing competition. 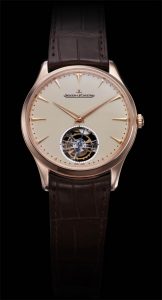 In 2012, the Master Ultra Thin Tourbillon featuring this same tourbillon is an anthem of praise to this prestigious device. In this stupendously slender execution, it is held by a filigree-worked bridge providing an exquisite view of its perfectly proportioned orbit. Set against an eggshell-white dial, the applied pink gold hour-markers retain the modesty required to avoid distracting the gaze from the true focus of attention. The gold hour and minute hands accompany the small seconds at 6 o’clock which, interdependent with the rotations of the tourbillon, performs a complete turn once a minute. The result of decades of patient research and development appears in a state of perfection and simplicity such that no one admiring it could possibly imagine the efforts involved in making it. This is indeed the hallmark of all authentic masterpieces. In homage to this artistic and technological accomplishment, the Manufacture Jaeger-LeCoultre will offer the Master Ultra Thin Tourbillon exclusively with a pink gold case measuring 40 mm in diameter and measuring an incredible thin 11.3 millimetres.

Throughout its rich history, Jaeger-LeCoultre’s inventiveness has been attested by the filing of almost 400 patents. More eloquently than any other, this statistic illustrates the tirelessly innovative momentum of the Manufacture, although it only takes on its true significance when one recalls that 80 of them have been awarded for decisive breakthroughs made since the dawn of the third millennium. For the Grande Maison in the Vallée de Joux, the acceleration of history is no mere myth.

For twenty years, the strict demands of the 1000 Hours Control have been conducting rigorous test procedures on all Master Control models, which embody the latest developments stemming from the research undertaken in the Manufacture’s laboratories. For two decades, the performances and the reliability of the timepieces in the Master Control line have been enthusiastically welcomed by the public and by horological experts who salute their avant-garde technology. In 2012, three new timepieces celebrate a watch line that has truly come of age. Each expresses a particular aspect of the vast range of expertise cultivated within the Manufacture Jaeger-LeCoultre: prodigious horological classicism conveyed through a minimalist expression radiating breathtaking beauty; a contemporary expression of the power reserve in an ultra-thin case; and a tourbillon featuring a slenderness that is an outstanding feat in its own right. 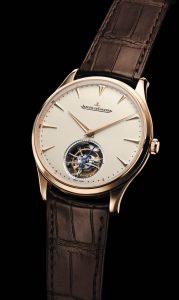 The inventions and improvements made by the Manufacture involve all aspects of watchmaking in order to raise the beauty, reliability and performances of its timepieces to new heights. Exactly two decades ago, in order to test the quality and sturdiness of its horological creations right down to the smallest details and in the most improbable conditions, Jaeger-LeCoultre instated a rigorous testing procedure, the 1000 Hours Control. Each watch in the new line unveiled that year was authorised to leave the workshops of the Manufacture only if accompanied by a certificate signed by the master-watchmaker responsible for this procedure. The document duly certifies that the watch has valiantly surmounted the daunting trials stipulated by this six-week test programme.

The models in the Master Control line reflect this demand for reliability in their very name. First introduced in 1992, this new generation of watches featured a design distinguished by the refinement of pure classical lines inspired by the grand tradition of 19th century pocket-watches, as well as by the legendary Memovox models and the Futurematic – the first entirely automatic watch with no winding crown. Nonetheless, their ability to withstand the most extreme conditions already stemmed from avant-garde technology. In an era when automatic timepieces generally set the frequency of their balances at 21,600 vibrations per hour, corresponding to 3 Hertz, Jaeger-LeCoultre Calibre 899/1 was distinguished by its high frequency of 4 Hertz, meaning 28,800 vibrations per hour – a characteristic that put it several steps ahead of other contemporary watch movements.

Who other than Jaeger-LeCoultre would have dreamed of being so ruthless with shiny new watches fresh off the production line?

Just when it seemed they were ready to be slipped into precious presentation boxes and dispatched with all due care to their future owners, they found themselves instead in immaculate white lab rooms. These were the domain of the implacable Master Inspector, who presided over the smooth implementation of tests stretching over a full six-week period. At Jaeger-LeCoultre, timepieces are tested only once they are fully completed, just prior to departure from the Manufacture, and thus in their final form. Any discrepancy or any weakness detected during this month and a half is enough to ensure their instant return to the watchmaking workshops. The Master Inspector is inflexible in the exercise of his mission, as his own reputation – and even more importantly, that of the brand itself – depend on this unfailingly rigorous approach. Once received, each watch is thus subjected to a variety of tests: the cyclotest machine sets it into rotations punctuated by interruptions of various lengths, while other devices test its behaviour at various temperatures or verify its rating accuracy in six positions. Six weeks later, the Master Inspector finally gives the go-ahead by placing his signature on the certificate attesting to the fact that it possesses all the qualities required to become a loyal and greatly appreciated companion, day after day and year after year.