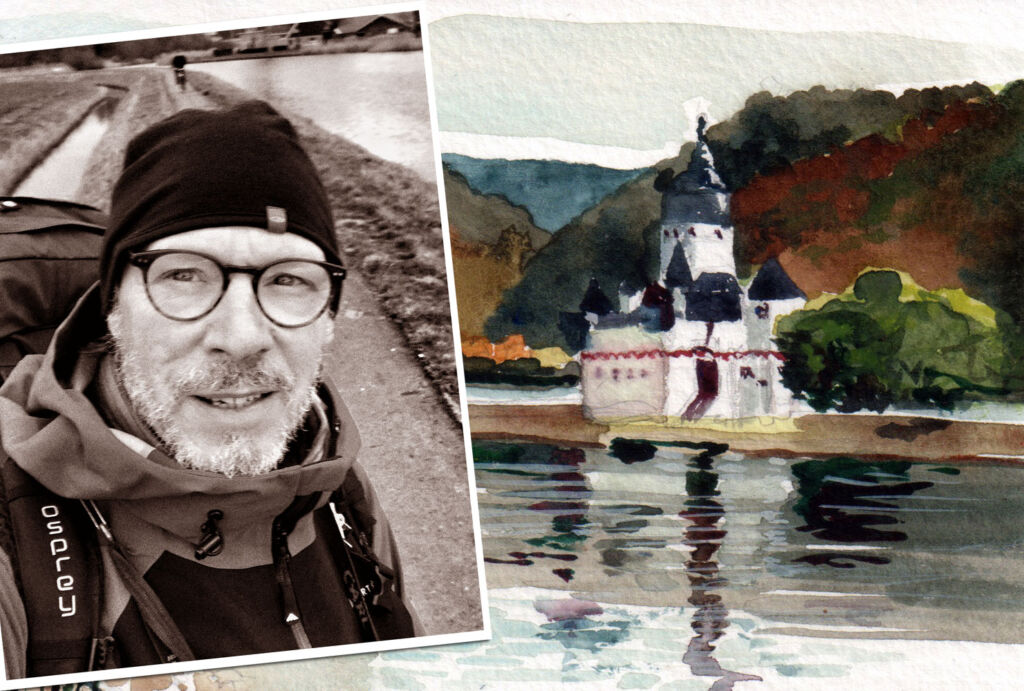 A new exhibition in September allows you to experience the travels of the artist Artist Jaques Gregoire. A collection of exquisite watercolours will tell the story of his long-distance walks from the North Sea to the Black Sea, through England and Wales to the west coast of Ireland and from Amsterdam to Gibraltar.

Jacques Gregoire’s landscapes capture a spirit of time and place in a hundred tiny moments for a solo exhibition at the Osborne Studio Gallery from 15th to 26th September.

Jacques Gregoire, born in The Hague in 1961, no known French connection, lives in Amsterdam with his family, studied Graphic Techniques at the Royal Academy of Fine Arts in The Hague. After finishing his studies in 1987, he went to Australia for the first time. Its powerful influence has guided his life ever since. 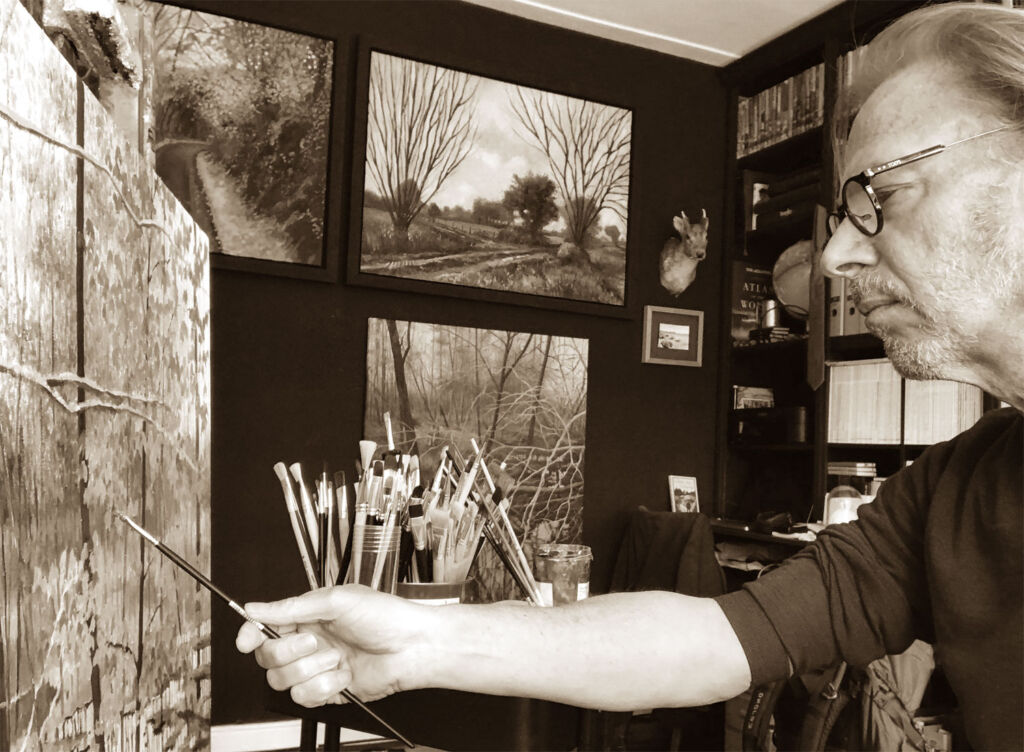 “I lived among the aboriginal people for six months, following in the footsteps of travel writer Bruce Chatwin after reading his book ‘Songlines’.  I returned every year to immerse myself in the landscape, especially fascinated by birds, making sketches, studying aboriginal rock art of long lost animals.”

Charles Darwin’s great-great-great-granddaughter Sarah, a biologist and environmentalist, made friends with Jacques Gregoire in 2009 onboard the clipper Stad Amsterdam following in the wake of Darwin’s barge ‘Beagle’ in the 1830s. He was the ship’s artist, taking the party along the Australian coast, the same route taken by Darwin, from Melbourne to Perth. 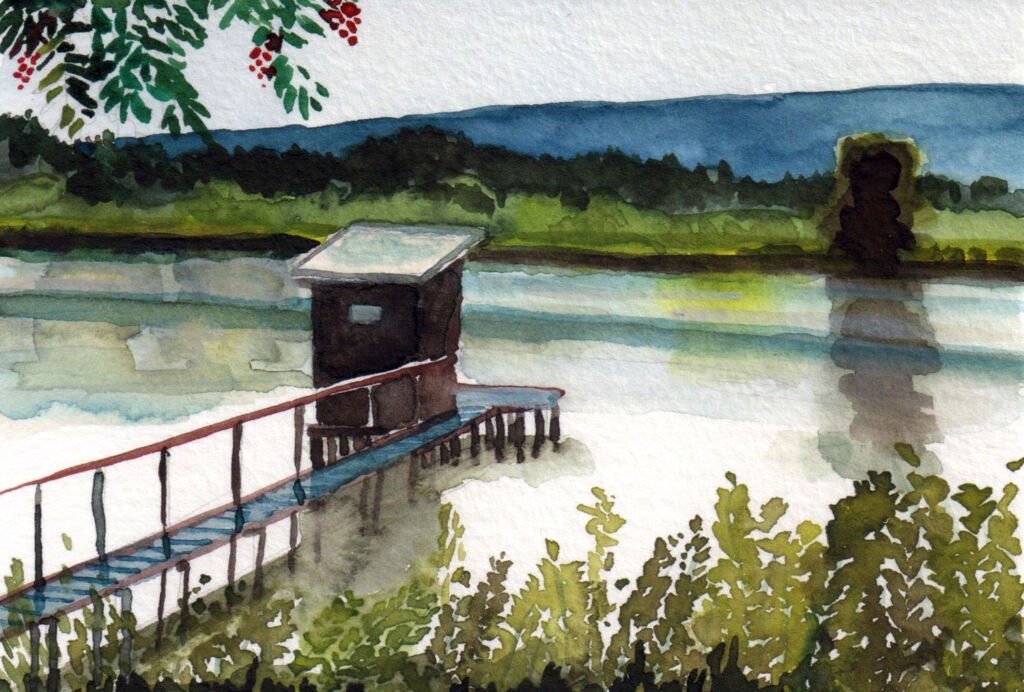 Sarah Darwin writes: “I was incredibly impressed by the way he works his observation, energy and productivity. He works from life, pulling out his sketchpad and watercolours at every opportunity, to savour the moment.  This authenticity really shows in his work, and makes it especially moving.”

Jacques continues his story, as life takes a new turn: “I started walking in 2015. I suppose it was time to go walkabout, as the Aborigines say. It was the urge to go walking with no purpose except to gain knowledge, any knowledge. I was inspired by Artemis Cooper’s biography of Patrick Leigh Fermor to walk across Europe in his path.”

Eighty-five years ago, aged 18, ‘Paddy’ left school to walk ‘from the North Sea to the Black Sea.’  He wore hobnailed boots, a volume of Greek poetry in his pocket. His dazzling looks, charm, scholarship, courtesy, won him, friends, everywhere, moving from Schloss to Schloss, welcomed by the old aristocracy.

Jacques says, “I decided to follow in his footsteps, a journey of 3000 kilometres, and 100 days of 30 kilometres a day. I wanted to see if there is still evidence of Patrick after 85 years, and to paint the landscape he traversed.”

Patrick Leigh Fermor’s books of memories’ A Time of Gifts’ and ‘Between the Woods and the Water’ are classic bestsellers – his name on every list of ten best travel writers. 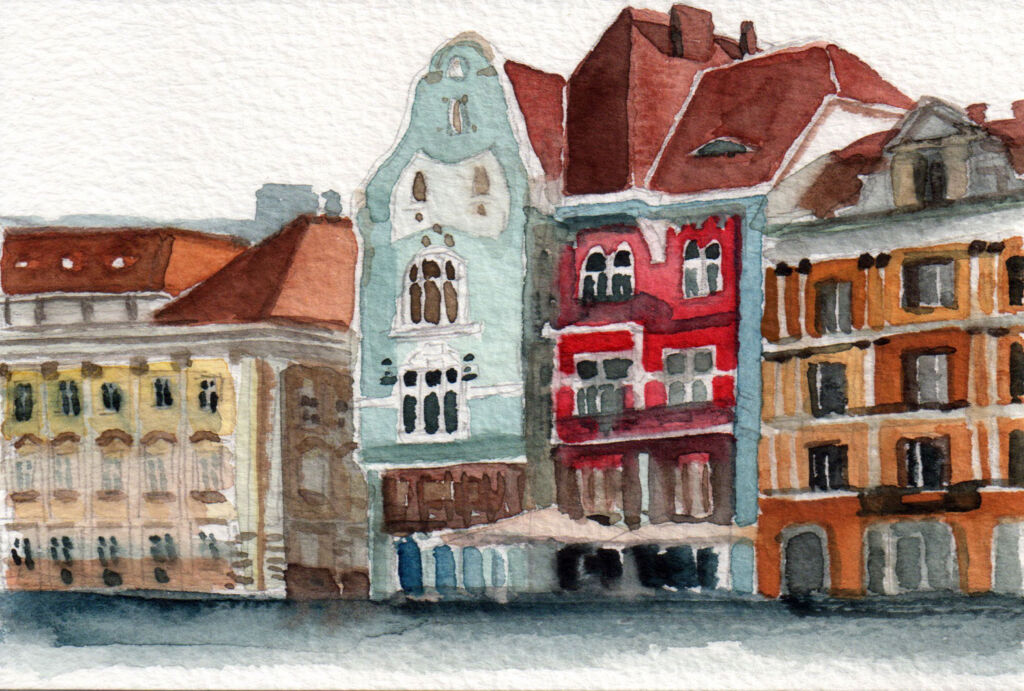 Jacques shares the same sense of wonder and surprise at everything he sees, “I make a watercolour for every day I walk. In the studio, I make paintings in oils of sketches made during the walks, and every bird sketch in pen and ink.

In 2015, I was enjoying the beautiful landscape around the city of Heidelberg. I discovered that I was standing at exactly the same spot in the city as JMW Turner, one of the greatest English painters, who depicted nature as ‘sublime’. For him, it was a religious experience. For me, too, I wanted to unravel the mystery of nature, which is constantly changing.”

Nick Hunt, a highly regarded travel writer of our own time, also walked across Europe in 2012, following the ‘great trudge’ of Patrick Leigh Fermor in 1934. His book ‘Walking the Woods and the Water‘ published by Nicholas Brealey, 2014. 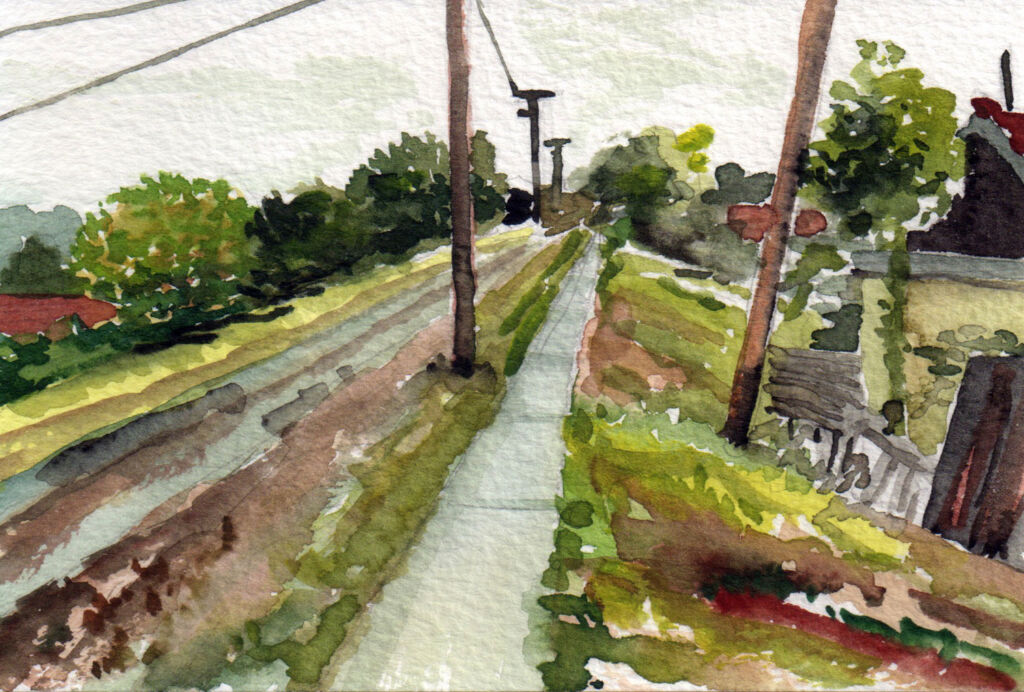 When Nick saw Jacques Gregoire’s paintings for the first time a week or two ago, he experienced an ‘uncanny sense of déjà vu.’

Two creative artists, wordsmith and painter, saw the same things: images flashing back into shared memory, captured in watercolour, not so much the Mittel European turrets and spires, but “the fishing hut on a lake, the patch of rushes in a marshy field, the road sign by a railway line.”

Nick Hunt concludes: “Each of them is meaningful, a tiny moment caught in time, not only connecting three long walks – in 1934, 2012, and 2015 – but the journey you, the viewer, make as you walk these paintings.” 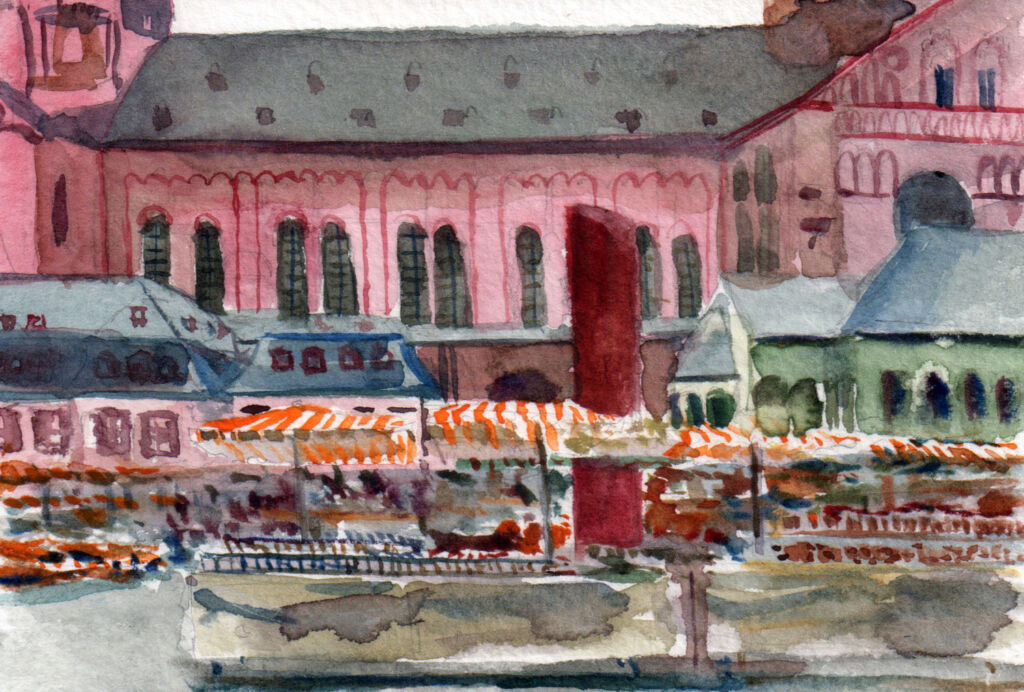 Jaques Gregoire Exhibition – Where and how?

The Jaques Gregoire exhibition takes place between 15th to 26th September at the Osborne Studio Gallery. Opening times are Monday to Friday from 10 am – 6 pm and on Saturday from 11 am to 5 pm.