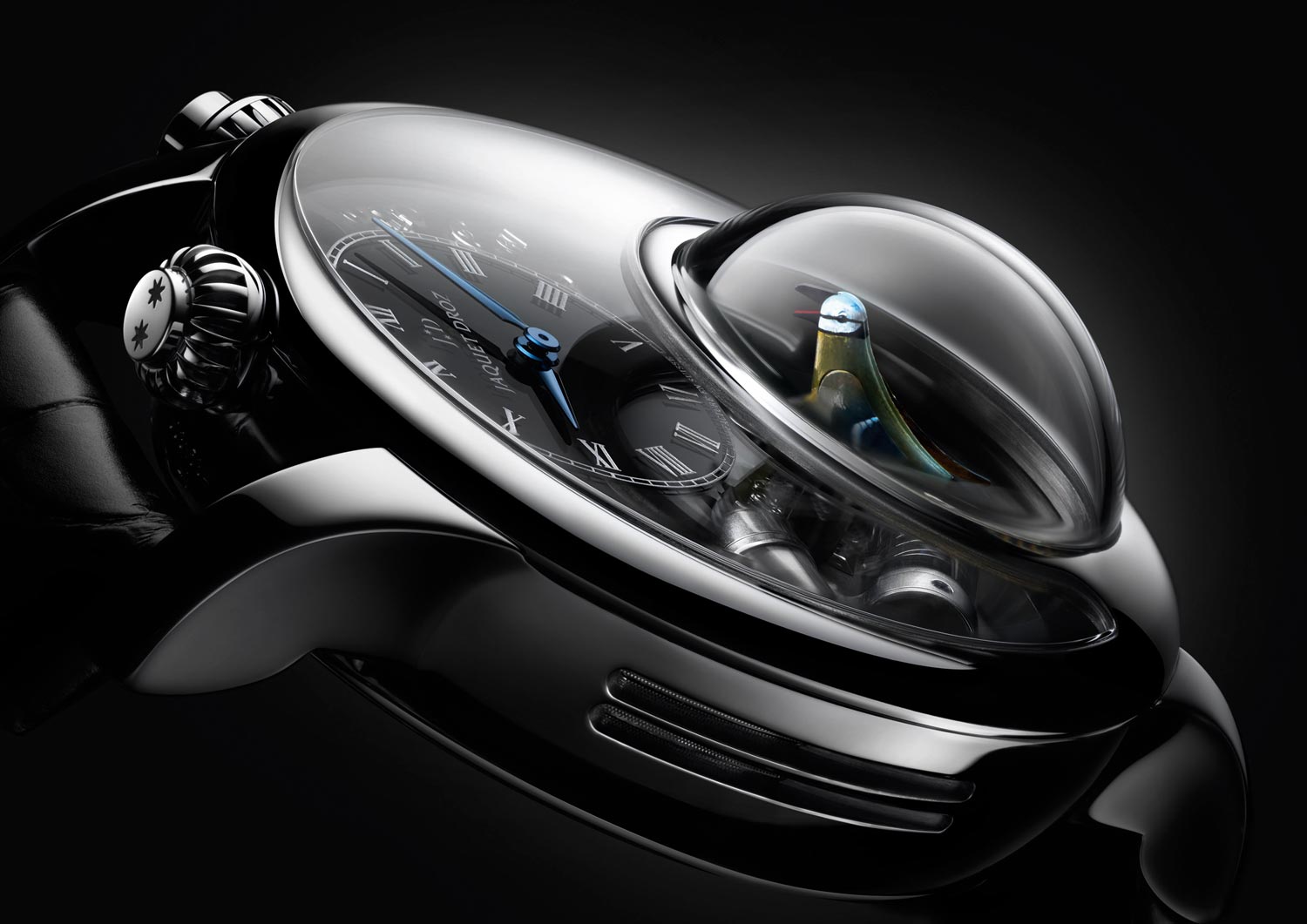 The Jaquet Droz Charming Bird was the winner in the “Mechanical Exception” category at the Grand Prix d’Horlogerie de Genève (GPHG), which distinguishes watches that present a special mechanism or other original or exceptional horological concept. The jury recognized the beauty and the unique features of this watchmaking feat that integrates a singing bird automaton. Jaquet Droz dedicates this award to the watchmakers, artisans, artists, technicians and Friends of Jaquet Droz who made this adventure possible. 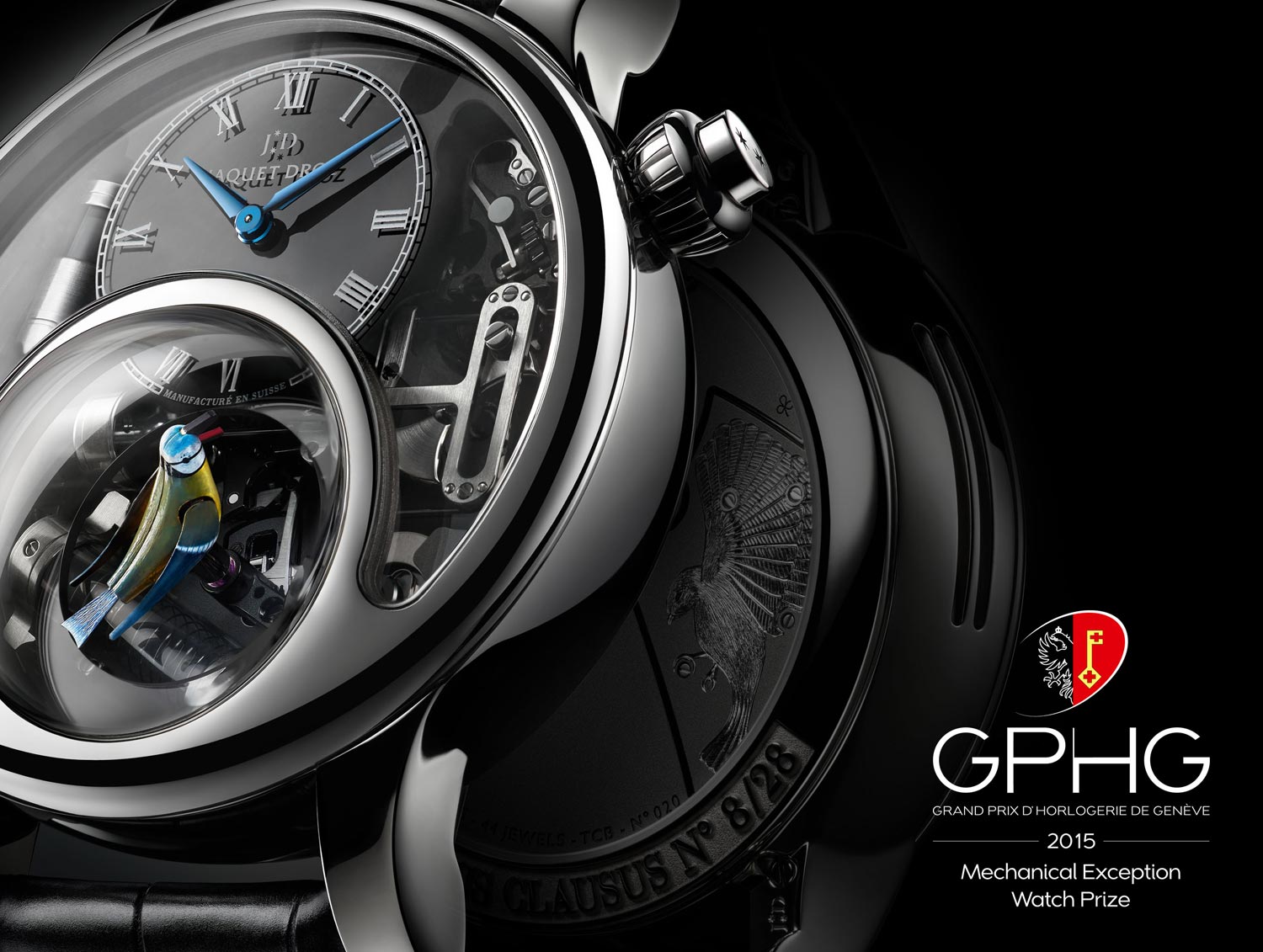 At the heart of the legend created by Pierre Jaquet-Droz in his manufactory in La Chaux-de-Fonds, birds play an enchanting role in these legendary timepieces. Whether purely decorative or conceived as genuine singing automata, they have been part of the brand’s creative adventure for nearly three centuries and now continue to delight of each of their admirers.

With the Charming Bird, Jaquet Droz invites you to enter a universe steeped in history, beauty and technology. 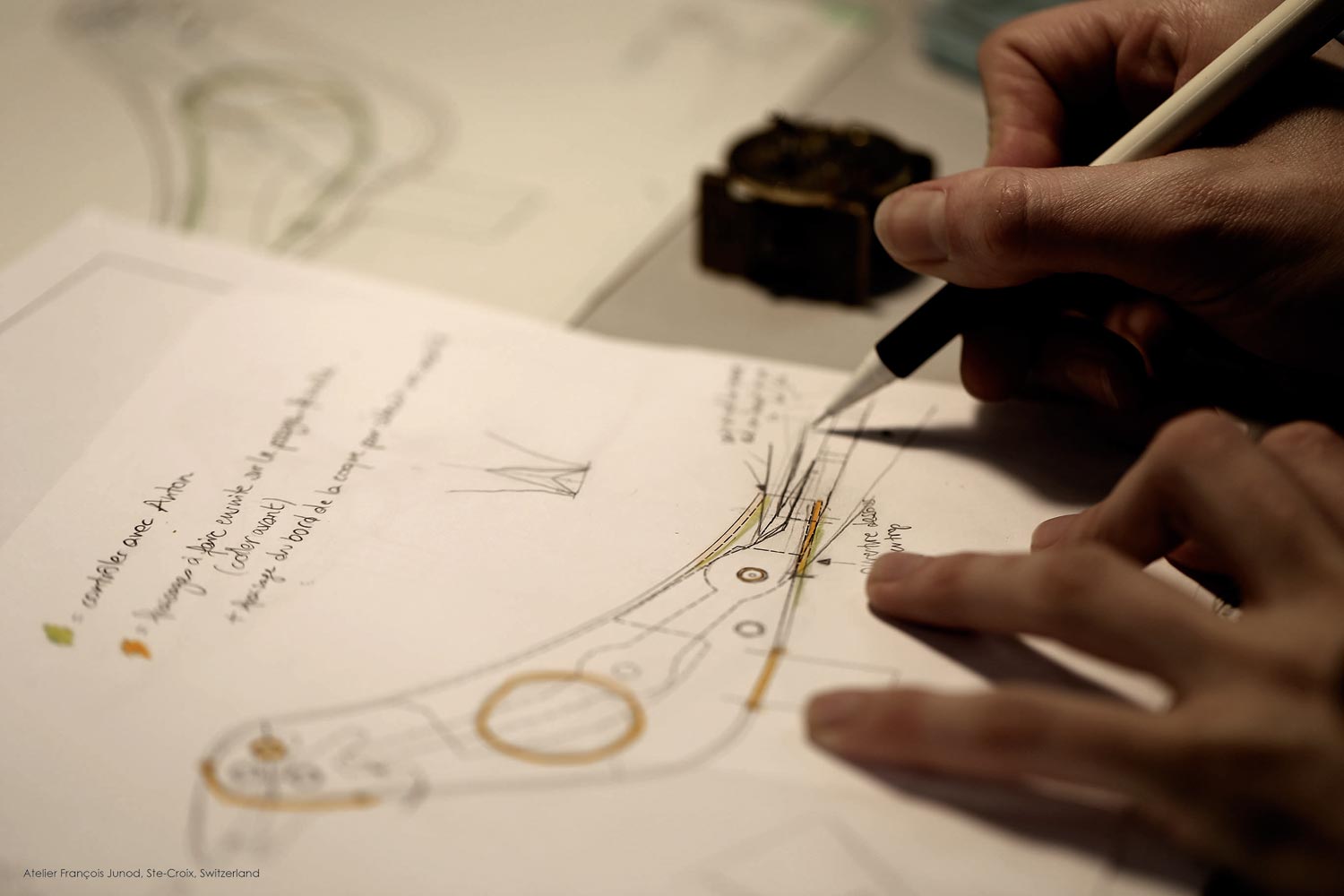 The History
A bridge between past and present, The Charming Bird represents the apotheosis of the great watchmaker’s creativity and the longstanding fidelity of the master craftsmen who have followed in his footsteps.

This timepiece, produced in white gold and red gold, in a limited edition of 28 pieces each, is an ode to the rich creativity of the past and the promises of today that encapsulates the fabulous history of Jaquet Droz. The songbird celebrates the brand’s DNA by reviving the techniques of the automaton and the miniature.

By combining them with the artistic skills of the Ateliers d’Art, it pays tribute to the continuity of the exceptional expertise perpetuated by Jaquet Droz. 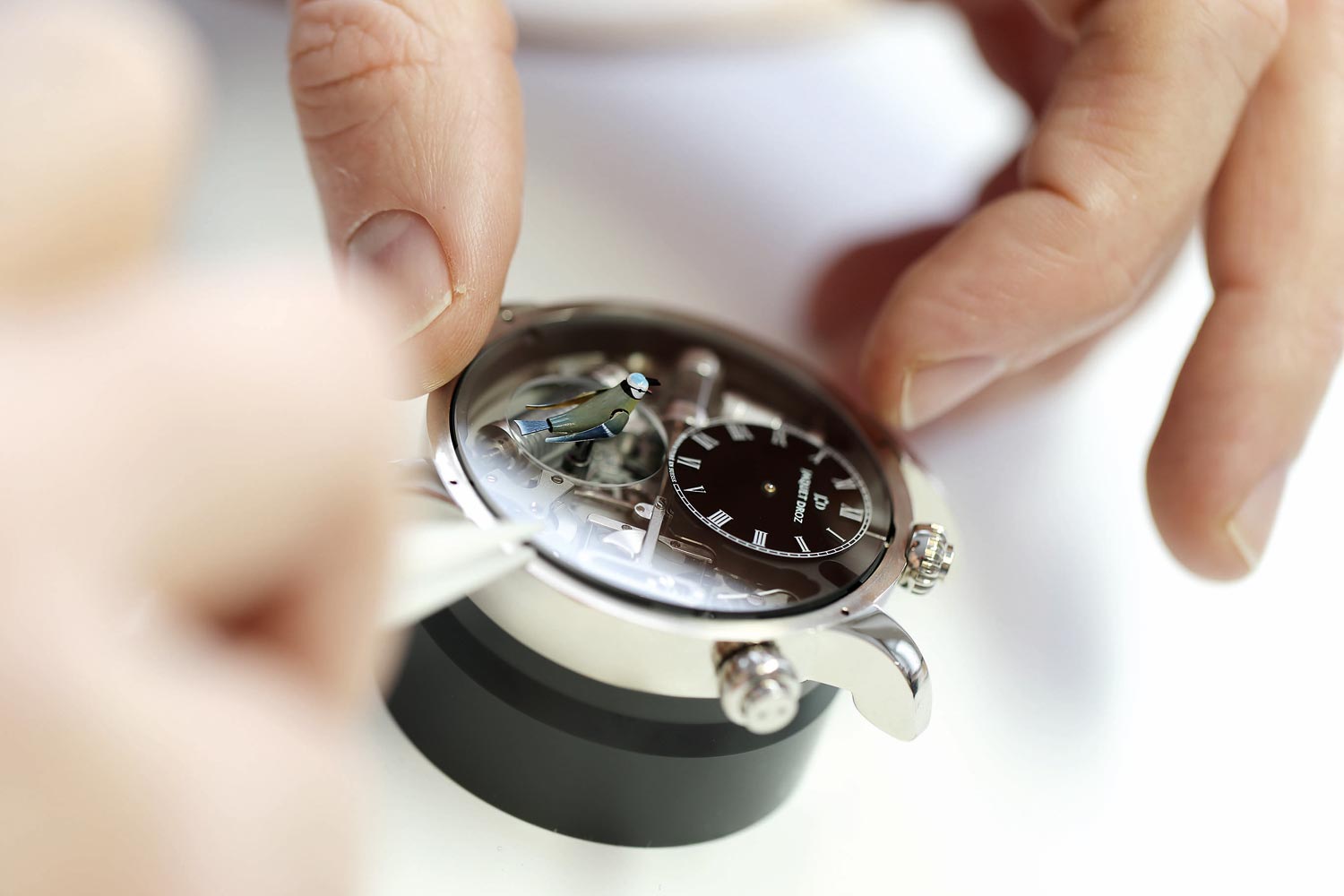 The Aesthetics
This ground-breaking timepiece reveals a modern, pared-down aesthetic, in which we find a miniature singing bird ensconced in a 47 mm-diameter case with a determinedly contemporary look featuring black, anthracite and transparent elements.

The case combines a sober design with a dome-shaped sapphire crystal specially conceived to enhance the effect of each ray of light that passes through it.
The artisans of the Jaquet Droz Ateliers d’Art spend over twenty hours fashioning each songbird. First the bird’s feathers, head and exquisitely delicate tail are engraved in an exacting stage that demands total accuracy and concentration from the artisan.

Then the painter adds a final touch of finesse, contrasting tiny strokes of colour with the black and anthracite lines of the dial. 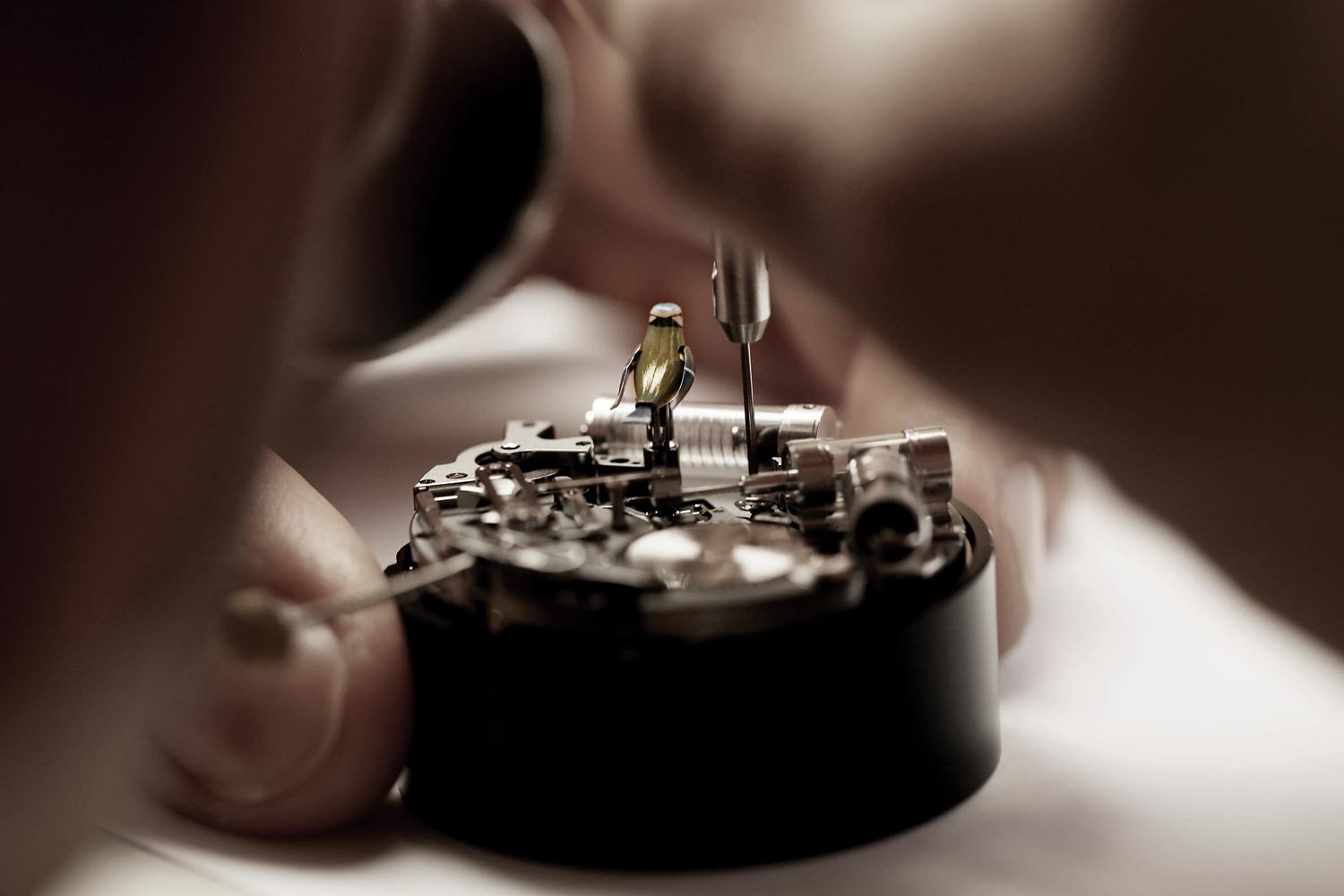 The Technology
Traditionally made with a bellows system, Jaquet Droz songbirds needed to be miniaturized and adapted to fit into a wristwatch. New technologies were specially developed to achieve this: sapphire for the tube and carbon for the piston. Sapphire is a mineral with strong resistance to wear and tear. Carbon is used to limit friction and increase water resistance.

This miniaturization process (for which a patent has been filed) creates tiny pistons that pump the air, store it and produce the sound. The exact sound it makes is dependent on the speed of the piston and the shape of the bellows opening.

The automaton’s mechanism is based on a system requiring three cams; one to direct the bird’s rotation, a second to control the opening and closing of the beak, the flapping of the wings, and the movement of the tail; and a third that adjusts the note of the whistle.
While most watches with striking mechanisms draw inspiration from stringed instruments (music boxes) or percussion instruments (minute repeaters), the Charming Bird is designed on the principle of a wind instrument.

The mechanism harnesses not vibrations, but air to produce its sound – in this instance, the chirping of a bird. The whistle has been painstakingly perfected to ensure it reproduces the 3 different notes of the melody flawlessly and amplified to the required volume.

Technicians also carried out in-depth research on the movement components to ensure their vibrations do not create unwanted sound when it is in operation.

Jaquet Droz Charming Bird – Where and how 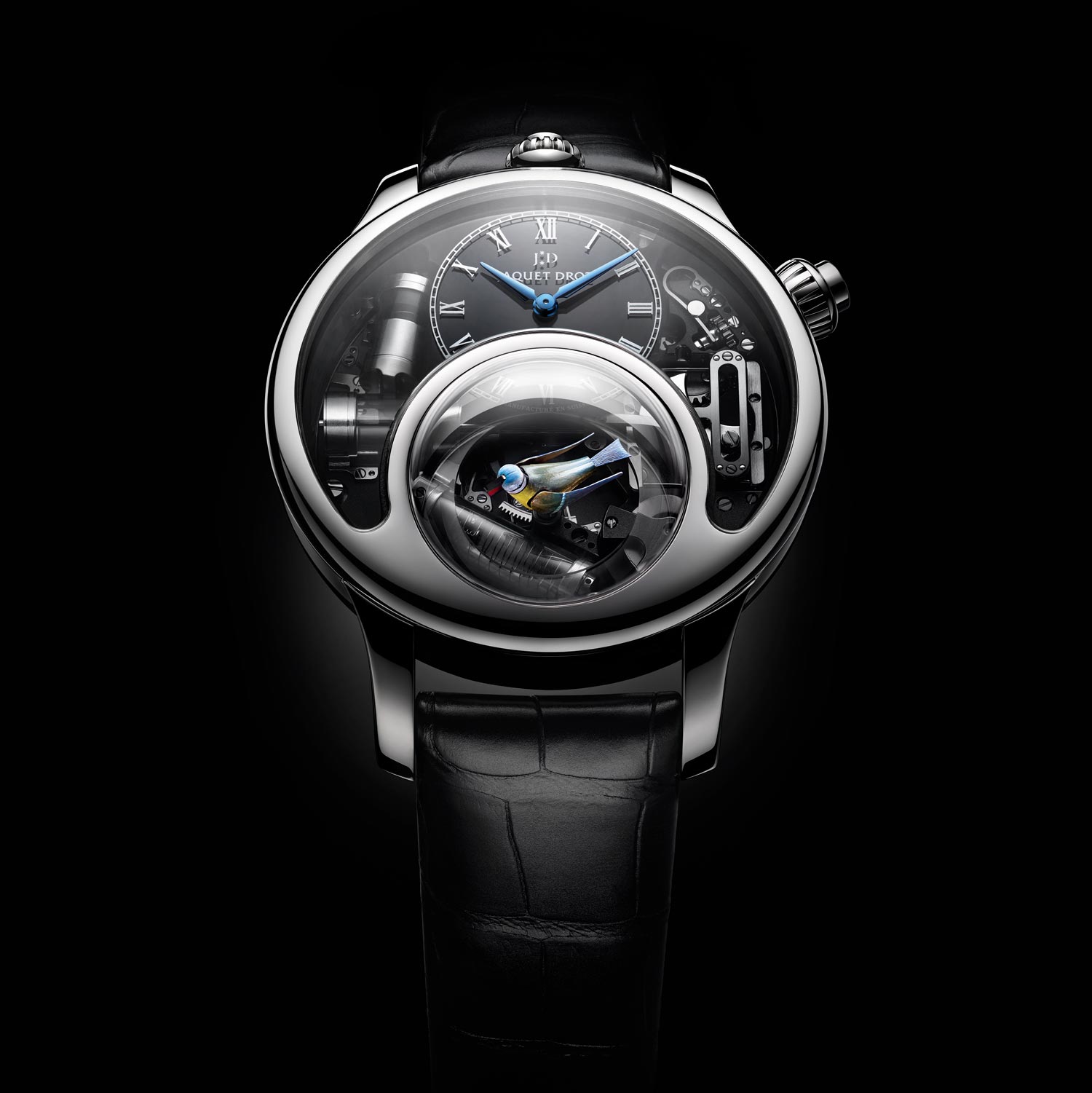