The Jeanneau Yachting family includes numerous sailboat racers at their shipyard and throughout their dealer network.

Without doubt, among the very best of these is Mateusz Kusznierewicz, exclusive Jeanneau Dealer in Poland, a man aiming for the gold medal in Star Class at the 2012 Olympic Games in London.

Mateusz Kusznierewicz will be participating in his 5th Olympic competition in London, with a single goal: winning the gold medal again, as he did in 1996 in Atlanta. 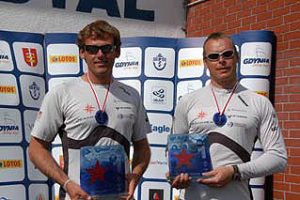 In 2011, he has already participated in some of the biggest sailing events: in the USA (Miami), in Spain (Santander), in Holland (Medembik), and in Great Britain (Weymouth). Mateusz will wear the Jeanneau colours with pride throughout the 2011 season and on to the 2012 Olympic Games in London. At the Cannes Boat Show, Mateusz has also agreed to christen Jeanneau’s newest sailboat models, the Sun Odyssey 509 and 379 and the Sun Odyssey 44DS. Whether at the regattas or at the shipyard, the spirit of competition is alive and well with Mateusz Kusznierewicz and Jeanneau.