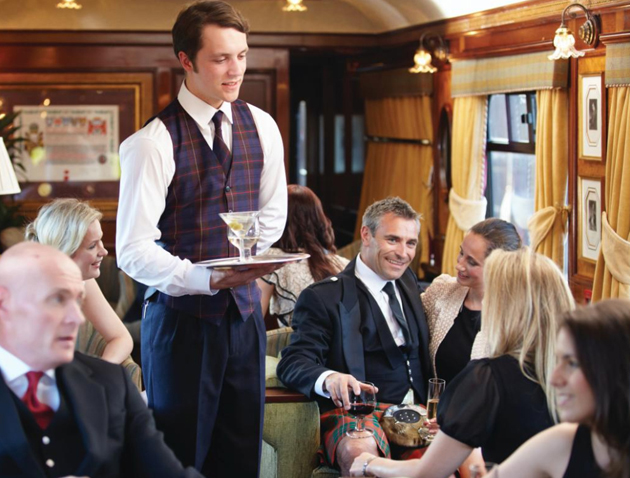 Journeying to the very heart of the Scottish Highlands, the luxuriously comfortable cabins of The Royal Scotsman, the UK’s only luxury sleeper train, transports guests across the ruggedly beautiful terrain to explore the very best of Scotland. 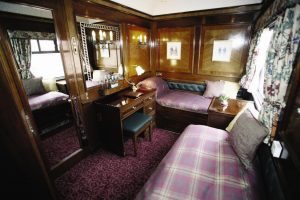 This month sees the liveried carriages return to Highlands as the 2012 season for The Royal Scotsman commences. Exquisite meals crafted from the best local ingredients, many of which are picked up from local suppliers along the journey, sleeping in cosy cabins aboard the train whilst it’s stabled in remote stations, access to some of Scotland’s most beautiful stately homes and tours of the finest whisky distilleries are just some of the highlights.

THE SEASON
The season, which runs until October, has regular departures from Edinburgh Waverley Station touring the rugged Scottish Highlands visiting sites including Loch Lomond, Ben Nevis and the beautiful Morar Sands. The collection of itineraries includes the two night ‘Highland’ journey giving a taste of Scotland’s rich heritage; the three night ‘Western’ Journey which explores Scotland’s wildest side up the scenic West Coast; the four night Classic Journey covering some 720 miles and visiting some of Scotland’s most iconic sights including Glamis Castle; the five night Grand West Highland Journey is a combination of the Western and Highland journeys; The Grand North Western Journey combines the Classic and Western journeys. The highlight of the season is the Grand Tour of Great Britain, an annual, seven night journey which sees the train cross the border to tour some of Britain’s greatest sites including Bath, Oxford, Conwy, Cambridge and York. The changing landscapes can be admired from the lounge; the open veranda of the train’s Observation Car, whilst dining on traditional Scottish fare enjoyed in one of the two dining cars or from an en-suite State Cabin, beautifully fitted out in rich woods and inlaid marquetry. 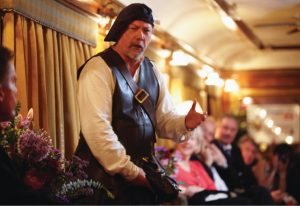 Home to Hogmanay and birth place of Burn’s Night, Scotland knows how to throw a party, and the luxurious carriages of The Royal Scotsman train provide the perfect setting allowing guests to savour the dramatic wilderness of the Highlands and the remote windswept beauty of the Scottish beaches without disrupting the celebrations. Whether marking a marriage, anniversary or a birthday, The Royal Scotsman is a venue like no other. For a milestone birthday or anniversary, a journey on The Royal Scotsman is a spectacular backdrop to reliving treasured memories, whilst creating a host of new ones during the trip. Whether travelling as a couple or as a larger group, nothing compares to celebrating in style dancing to a highland band in the Observation Car; sipping champagne after a daring paddle in the bracing waters of the Scottish coast; or developing your palate with whisky tastings and delicious local ingredients. Chartering the train for a special occasion lets guests decide on a theme, whether it be food, history and heritage, fishing or golf, a carefully devised itinerary showcasing the best of Scotland will be created with a range of off train excursions. 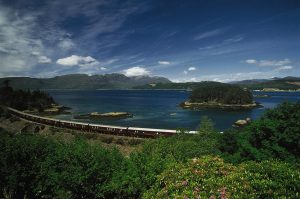 Combining the atmosphere of a grand country house with the intimacy of just 36 guests including the happy couple, chartering The Royal Scotsman to celebrate a wedding is an exquisite way to start married life.  With one of the on board hosts a licensed registrar, the train is fully licensed to perform the civil ceremony on board, allowing the happy couple to choose the most idyllic spot for their vows to be exchanged. With an itinerary, menus and excursions individually tailored to the couples requirements, the wedding party will find themselves, with their guests, on a journey like no other whilst sampling the best Scottish whiskies and revelling in the on board entertainment, all with the wild romantic vistas of the Scottish countryside rolling past the windows.

Honeymoons
To beat the rising air fare charges, threat of strike action and long airport queues, The Royal Scotsman is perfect for a romantic ‘no fly’ honeymoon. With a range of excursions to choose from, which can be tailored for couples, including whisky tasting, exploring Scotland’s wild and romantic landscapes on a Scottish Safari and immersing in Scotland’s heritage at historic castles and country houses, couples can lose themselves before returning to unwind in their private en-suite cabins, beautifully fitted out in rich wood and inlaid marquetry.

Prices start from £2,350 per person, including all meals, drinks, accommodation and excursions. The Royal Scotsman season runs from 23rd April to 26th October 2012. Further information can be found on the website www.royalscotsman.com or by calling Orient-Express reservations 0845 077 2222