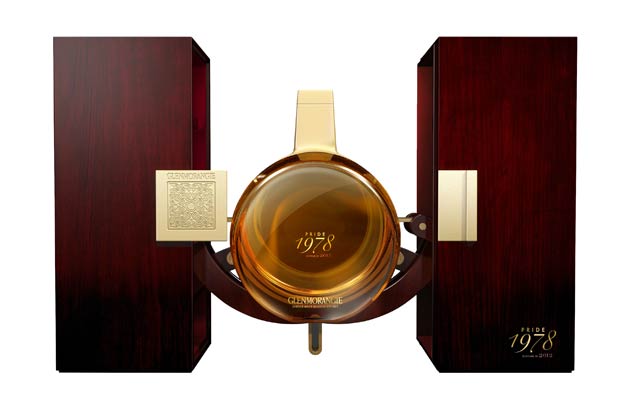 Glenmorangie has built on the success of its exclusive Pride 1981 bottling, released in 2011, with the launch of Pride 1978 in July of this year.

The new 34 year-old addition started as a vintage 19 year-old whisky before being extra-matured in rather special casks for 15 years – the longest ever period a Glenmorangie whisky has undergone extra-maturation. Only 700 bottles will be made available worldwide, since only 5 casks of this precious whisky were laid down, making the latest Single Malt extremely rare.

Crafted by Dr Bill Lumsden, this exceptional Glenmorangie has been extra matured in casks which had contained an exquisite French Premier Grand Cru claret wine. Dr Lumsden, Director of Distilling and Whisky Creation at Glenmorangie, the only man to win leading US Whisky Magazine Malt Advocate’s “Industry Leader of the Year” Award three times, believes this is his finest whisky to date.

Dr Lumsden said: “The whisky’s birth date, as its name implies, was 1978. This is when the original liquid was distilled for maturation in Glenmorangie’s finest oak casks transforming the liquid into a vintage 19 Year Old. After a further 15 years of extra-maturation in 5 precious casks, Pride 1978 was bottled in 2012.

“The resulting liquid is a luxurious burnished copper with rich, decadent and delicious scents of chestnut, toffee and cherries. I believe this is my most exquisite expression yet, one that will be savoured by whisky enthusiasts across the globe.”

To mark the release of Glenmorangie’s rarest Single Malt to date, internationally acclaimed artist Idris Khan has created a unique piece of artwork to accompany the purchase, titled ‘Disappearing Casks’.

Khan said: “I am absolutely delighted to work with Glenmorangie. When visiting their distillery in Tain I was immediately mesmerised. The vision of the casks has stayed with me and provided inspiration for ‘Disappearing Casks’. I was born the same year that the casks were laid down and it feels very fitting that I am helping to tell its story.”

The artwork represents traces of the distinctive whisky barrels at Glenmorangie’s distillery in Tain, where the transformation in whisky-making happens. It is these five casks which have been locked in archives since 1978 which have produced Glenmorangie’s finest Single Malt yet.

Only 700 decanters of Glenmorangie Pride 1978 are available at a cost of £3,900 each, accompanied by a signed limited edition print of Idris Khan’s art piece.

Glenmorangie Pride 1978 may be purchased from independent retailers, department stores and at www.glenmorangie.com/shop
ABV: 47.4%