Introduction to the Pagani Huayra

Ancient legends of the Aymara tell us of Huayra Tata, god of wind, who commands the breezes, winds, and blizzards that invade the mountains, cliffs and hills of the Andean highlands.  It is told that Huayra Tata resides deep in the high peaks and valleys, abandoning them only to demonstrate his power to his wife, Pachamama, goddess of mother earth.

With his power Huayra Tata was able to lift the waters from lake Titicaca and rain them down on the fertile Pachamama.  When the Pagani Huayra sleeps, the waters and rivers lay quiet. But the calm before the storm is about to be interrupted…

Design of the Pagani Huayra

The eternity of the element air. Gentle and refined, yet the strength of the wind it is able to erode even the toughest of materials giving birth to distinctive shapes known in nature. Elegant and muscular the Pagani Huayra merges the past, present and future in a timeless interpretation of automotive art. The styling of the Pagani Huayra was perfected over the course of 5 years to find each line’s beginning and end. During this study, eight scale models were created, as well as two 1:1 models, each an evolution of the previous in a never ending quest to perfect the form and refining the substance. The bi-xenon headlamps on the Pagani Huayra are just one of the many precious gifts from the Zonda R, and LED daytime running lights are seamlessly integrated in the elliptical shape of the design. The rear bumper integrates with the diffuser and is dominated by an elliptical frame that surrounds the four central exhaust outlets, now becoming a characteristic Pagani element.

Backbone of the Pagani Huayra

The new central monocoque on the Pagani Huayra is an entirely new design made from carbontitanium. However, with the gull wing doors cutting deep into the roof, much research was focused on achieving the highest levels of rigidity through the application of new advanced composite materials and technologies first tested on the Zonda R. The fuel tank is located integrally in the best protected area of the monocoque, behind the driver, reinforced by safety cell made of different composite and ballistic materials. The front and rear CrMo subframes offer an exceptional rigidity-to-weight ratio to allowing the suspensions to work at their best while incorporating an advanced energy absorbing crash structure, ready to protect the occupants in the unlikely event of an impact.

The never ending quest for weight reduction on the Pagani Huayra resulted also into the combination of structural and non-structural or aesthetical elements. An example is the integration of all ventilation air ducts into the monocoque’s structure, making the use of additional parts and ducts unnecessary.
The result of this attention to detail is a vehicle weighing 1.350 kg making the Pagani Huayra the lightest sportscar in its class. 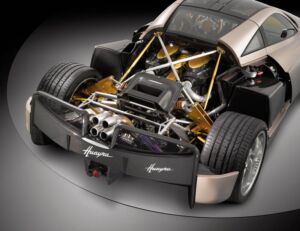 Heart of the Pagani Huayra

Mercedes-AMG provides the heart for the Pagani Huayra. The 60 degree 12 cylinder turbocharged engine with a displacement of 5980 cm3 has been developed not just to meet the strictest technical and quality requirements, but also to give the car its many faces. The calm and harmony of driving one of the world’s most refined GT car is interrupted when the driver calls upon the Pagani Huayra to unleash its 700 horsepower and 1000 Nm of torque.

The turbos have been studied to offer immediate response to the slightest throttle input, giving the driver full control over the engine at any rpm and preventing unwanted delays in the delivery of power. The Pagani Huayra engine’s systems have been designed and tested to stand up to the most adverse conditions of temperature and performance.

The Pagani Huayra has been subjected to the highs of Death Valley and the lows of the Arctic Circle. The two lateral radiators are positioned in the front to guarantee the best cooling efficiency of the intercoolers placed over the cylinder heads. Dry sump lubrication ensures an optimal oil feed to the engine even when the car is subjected to the most extreme lateral accelerations. It also regulates the oil flow so that only the necessary amount of lubricant is actually pumped into the engine from the external oil tank, reducing the friction caused by an excessive volume of lubricant inside the engine sump.

An oil/water heat exchanger reduces warm-up times by heating the engine lubricant during cold start and keeps engine coolant and lubricant levels at steady operational temperatures.  Extensive weight saving programs led to ingenious yet simple solutions. In order to reduce hoses and connections as much as possible is built directly to the engine. The intercooler covers serve as expansion tanks to the low temperature circuit and the engine coolant circuit. The vertical fins contribute to the cooling of the tanks. The M158 engine is homologated to meet the strictest environmental regulations, EU5 and LEV2. Despite the increase of power compared to the other Mercedes-AMG V12 engines developed for Pagani, CO2 emissions as well as the fuel consumption have been reduced, to make the Pagani Huayra class leading amongst 12 cylinder sports cars with values that are respective of much smaller vehicles in the market.

The two stage fuel supply system features two microprocessor controlled pumps feeding fuel to the engine with the second pump only activated when necessary, thus reducing the energy required to run the fuel pumps and eliminates the waste of excessive fuel being transported and heated in the fuel lines. This efficiency combined with a large 85 liter fuel tank ensure Pagani Huayra grand touring ability.

As an homage to the decennial tradition of Mercedes-AMG in building world class sports car engines, the M158 displays the historic AMG emblem on the intake manifold alongside the name of the technician that assembled the engine by hand at the Mercedes-AMG headquarters in Affalterbach, Germany. The Titanium exhaust system has been engineered by MHG-Fahrzeugtechnik and is a direct application of race proven technologies on a high performance road car and the complete exhaust weighs less than 10 kg. Hydroformed junctions are used to reduce backpressure and guarantee a free flow of the exhaust gasses. Titanium guarantees a low weight in the muffler area while Inconel guarantees reliability on the parts of the exhaust more exposed to high temperatures. Careful attention has been paid to the tuning of its sound, which has led to a harmonic rumble at idle speeds with a hint of the power that lies hidden at low speed and a deep thunderous growl of motor and air, reminiscent of an airplane, at high speeds.

>> Continue to next page of the Pagani Huayra feature