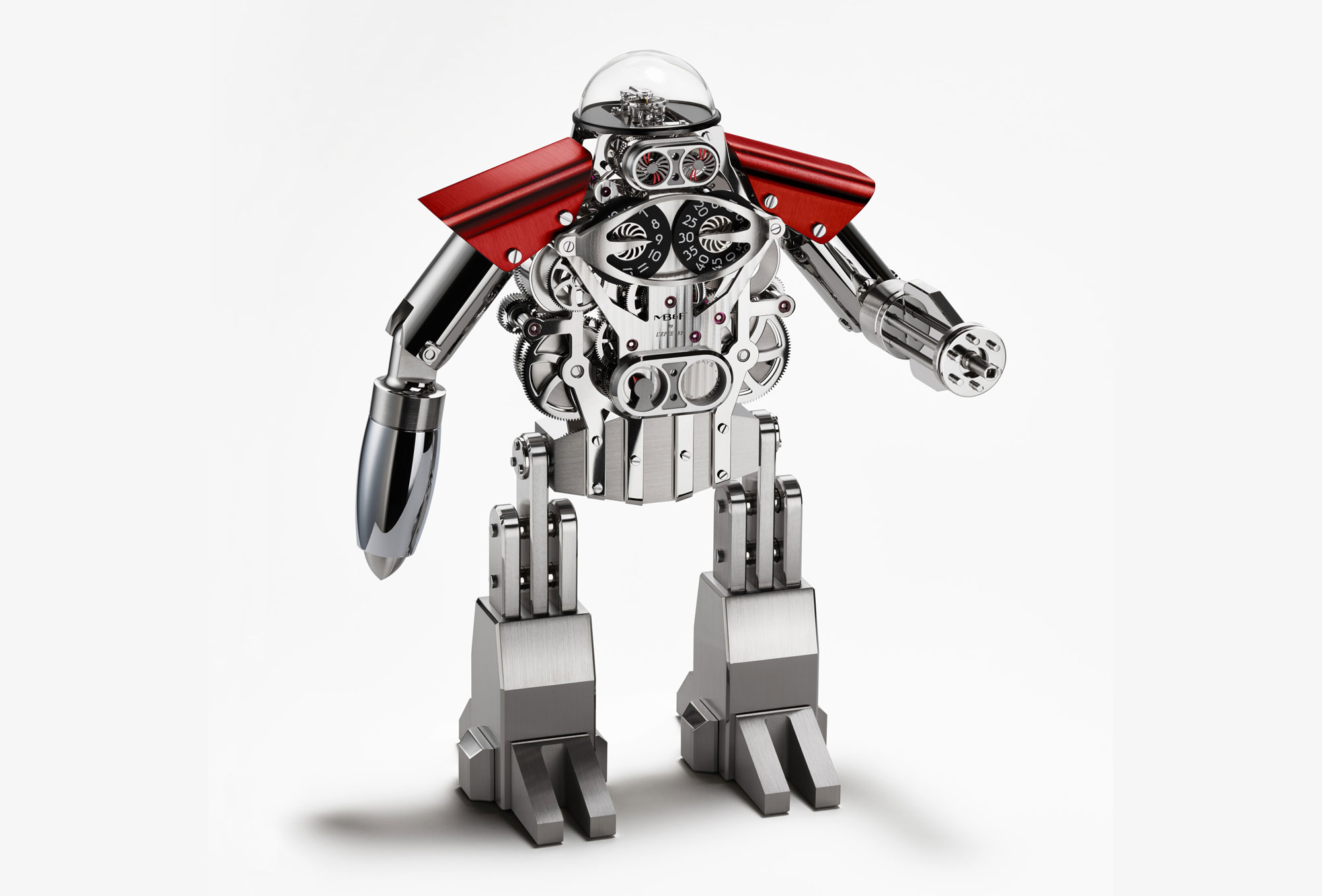 Only Watch is a biennial charity auction of unique timepieces under the High Patronage of HSH Prince Albert II of Monaco to raise money for research on Duchenne Muscular Dystrophy (DMD). This is a genetic disorder characterized by progressive muscle degeneration affecting young children, primarily boys.

With his broad shoulders protected by bright red anodised aluminium pads, strong metallic arms and legs, and a personality highlighted by an animated brain and blinking eyes, Melchior is ready to play with his friends. And he also has a small arsenal at his disposal, just in case any bad guys turn up and try to spoil the party! 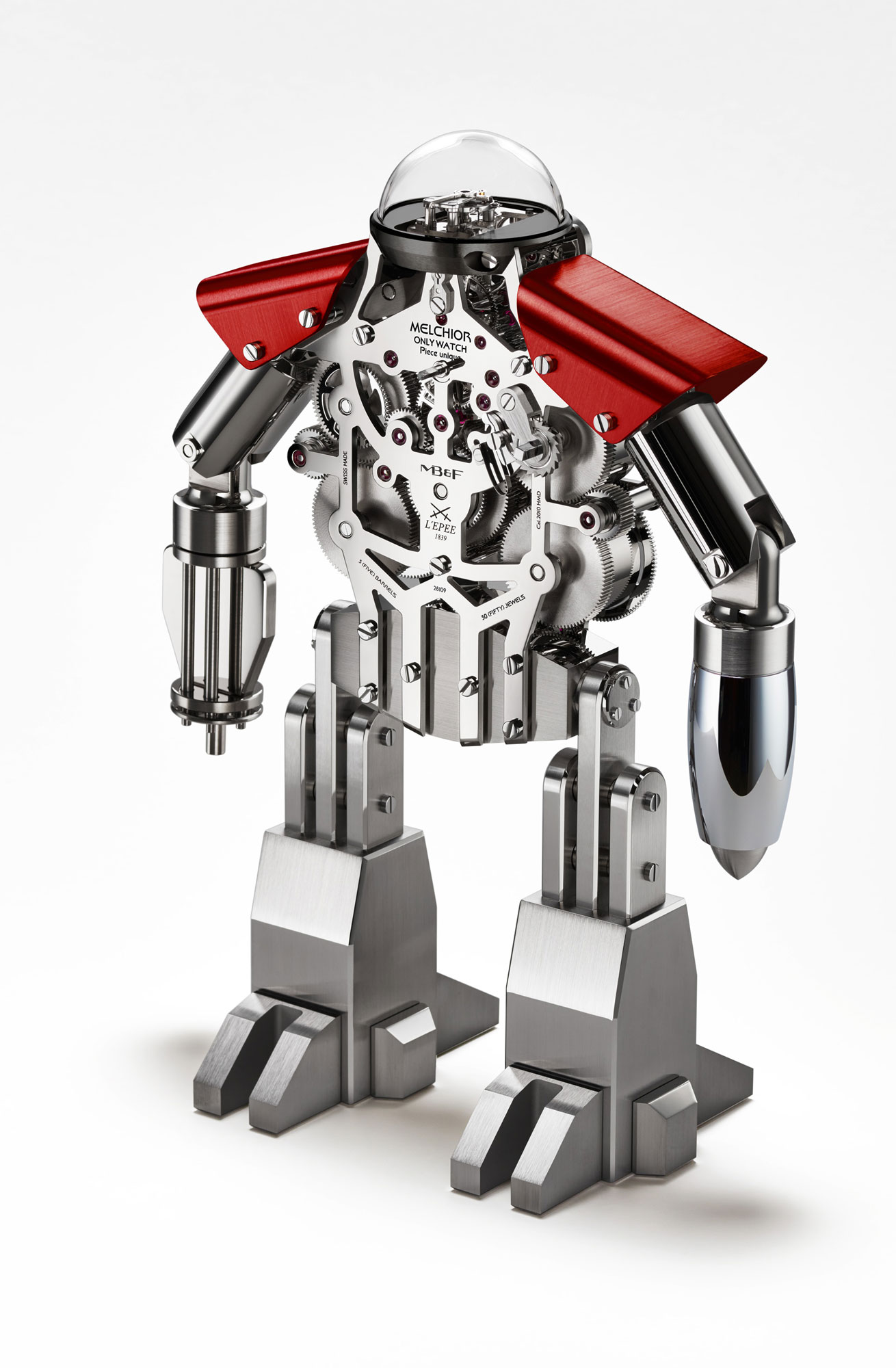 But while Melchior is certainly playful, he is not a toy. For as well as his always-at-the-ready-to-serve-and-defend demeanour, Melchior is also a high-end table clock crafted by L’Epée 1839– Switzerland’s only specialised high-end clock manufacture – featuring jumping hours, sweeping minutes, double retrograde seconds, and an impressive40-day power reserve drawing from five mainspring barrels.

Hours and minutes are displayed via discs on Melchior’s chest, while a dial on his abdomen indicates the state of wind of that long power reserve. Melchior’s eyes blink through a combination of fixed vents and revolving discs, endowing the robot with a playful touch of human-like personality. Melchior’s brain, which is actually the movement’s precision regulator, provides further animation as it gently pulsates under the polished glass dome on his head.

Founded in 2005, MB&F celebrates its first decade in 2015 under the theme: ”A creative adult is a child who survived”. Melchior Only Watch epitomises that expression perfectly.

A true robot companion is one you can play with, and Melchior does not disappoint. His upper arms rotate and lower arms pivot up or down – excellent manoeuvrability for aiming his rocket launcher or Gatling gun to blast away any bad guys that try to spoil the fun. And more practically, the gun detaches and doubles as the winding/setting key for the movement.

“A long time ago in a galaxy far, far away, man’s best friend was his robot,” says Büsser. “As a 10-year-old fan of Star Wars, I knew Luke Skywalker could never have prevailed had it not been for droids like R2-D2 – a loyal, resourceful, and brave robot who was always saving his friends. As an only child, I imagined having my own robot companion. Melchior makes that childhood fantasy a reality.”

The unique piece Melchior Only Watch is the 100th and final piece in the Melchior series. Clothed in palladium-plated brass and steel with bright red shoulder pads, Melchior is sure to put smiles on children’s faces and melt the hearts of adults. 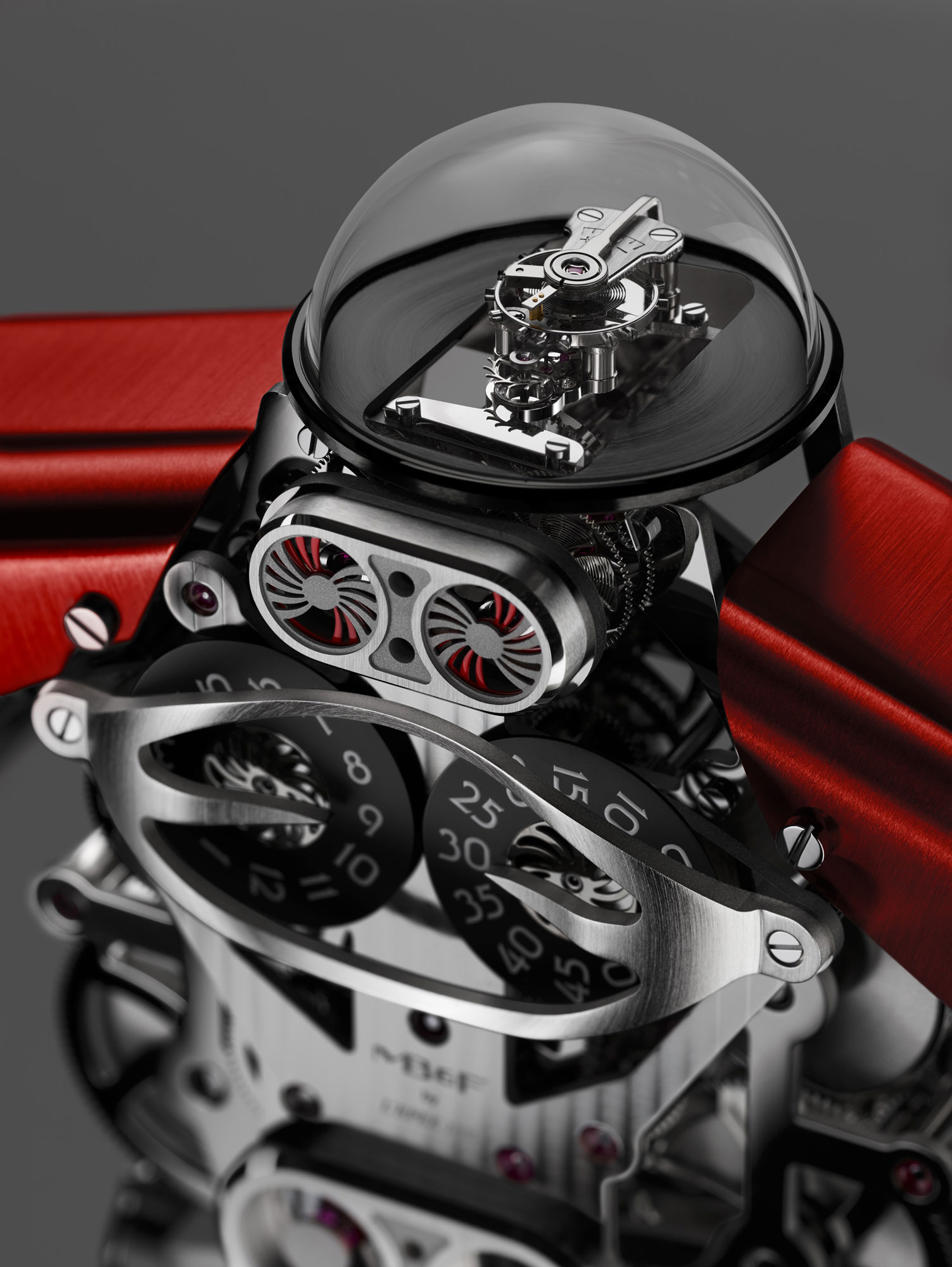 MB&F founder Maximilian Büsser developed the Melchior concept with designer Xin Wang in a quest to revisit his childhood hankering for a robot friend. Melchior comprises no fewer than 480 components, each one machined and finished at L’Epée’s Swiss atelier, bar the 50 movement jewels. An impressive 334 components make up the movement, while another 146 pieces comprise Melchior’s bodywork and armour.

Such was the originality of MB&F’s robot concept that L’Epée needed to develop several new components: Machining, finishing and assembling a piece like the bulging glass dome forming Melchior’s skull was a first for L’Epée, as was crafting a stainless steel winding/time-setting key to resemble a Gatling gun.

The winding/time-setting key clips into Melchior’s left elbow joint socket. It is held by a small magnet strong enough to hold the key, but not so powerful as to affect the function of the movement. The key boasts a double-depth square socket that neatly fits over both of the square pegs on the back of Melchior. One of the pegs is for winding the movement, the other for time setting.

Working from MB&F’s design, L’Epée diligently developed the various bodywork and armour components, carefully choosing materials according to the properties required. Where precision was critical – Melchior’s kinetic parts and his precision rocket launcher, for instance – plated brass was selected. His armour on the other hand is crafted mainly in stainless steel, providing optimal resistance to withstand any enemy attacks.

For clear reading of the hour, L’Epée developed a ‘slow’ jumping hour. This in-house complication sees the hour disc remain static for 55 minutes, then start to turn five minutes before the new hour so that the change of hour is smooth and subtle.

The movement regulator features an Incabloc shock protection system, which minimises the risk of damage when the clock is being transported. This sort of shock protection is generally only seen in wristwatches. In fact, Melchior’s exclusive table clock movement features the same type of mechanisms as a wristwatch – gear train, spring barrel (here, five in series), balance wheel, escape wheel, and anchor – but their dimensions are far larger.

The movement also features superlative fine finishing – côtes de Genève, anglage, polishing, sandblasting, circular and vertical satin finishing – that is seen on a wristwatch. However, finely finishing a clock movement is far more challenging than finishing a wristwatch because of the greater surface areas of the larger components.

The name ‘Melchior’
Fictional robots often possess monikers sounding like acronyms or reference numbers – think of HAL 9000, C-3PO, or K-9. But Max Büsser was eager to christen this one ‘Melchior’.

He explains: “In the Büsser family, for over five centuries from the 1400s onwards, every eldest Büsser son was either called Melchior or Balthazar. It alternated. My grandfather was called Melchior and hated it, so he had everybody call him Max, which is how I became a Max. My grandfather hated the Melchior-Balthazar thing so much that he put an end to this 500-year-old tradition by calling my father Mario. Now, a century later, I happen to love the name Melchior!” 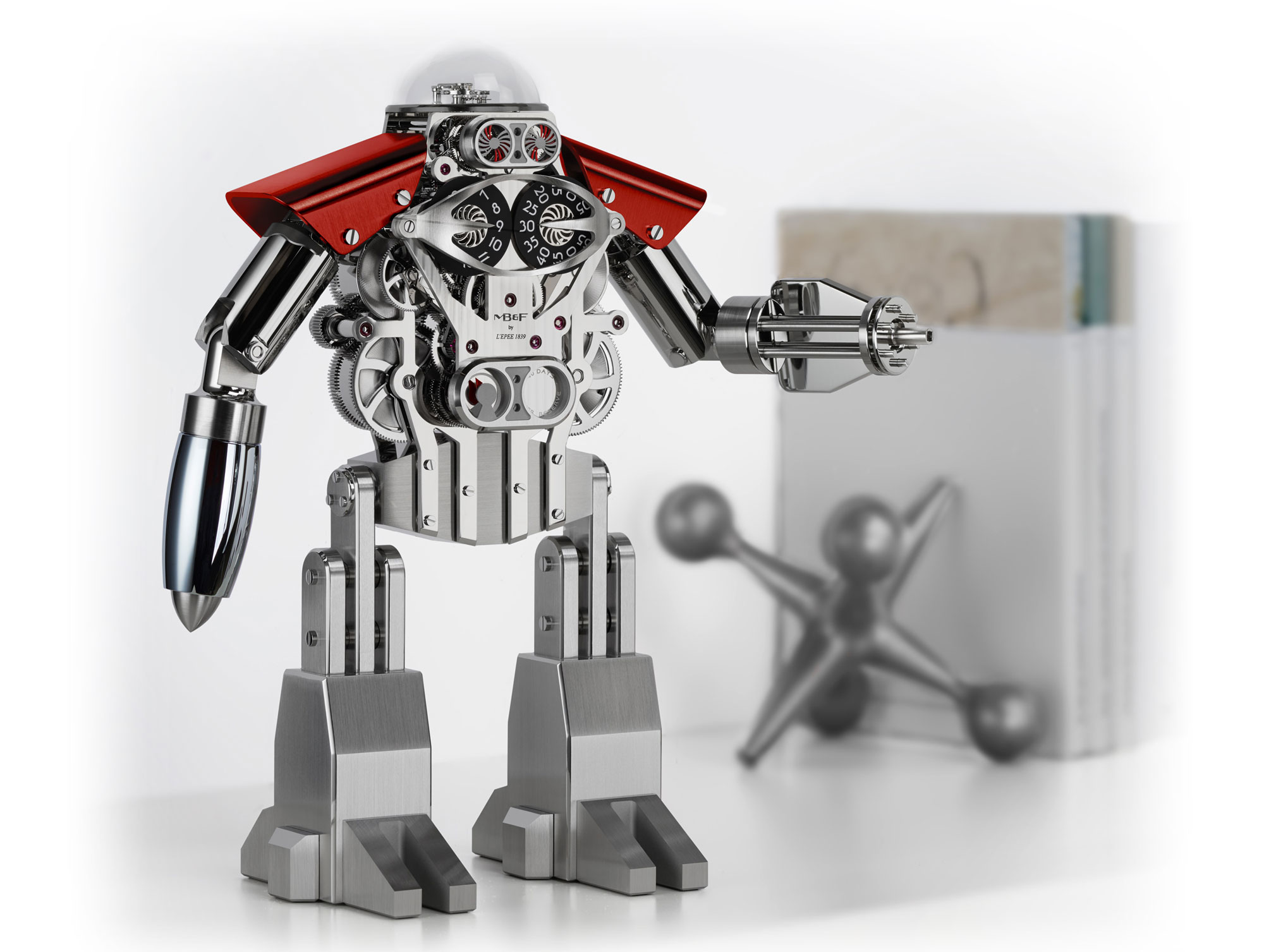