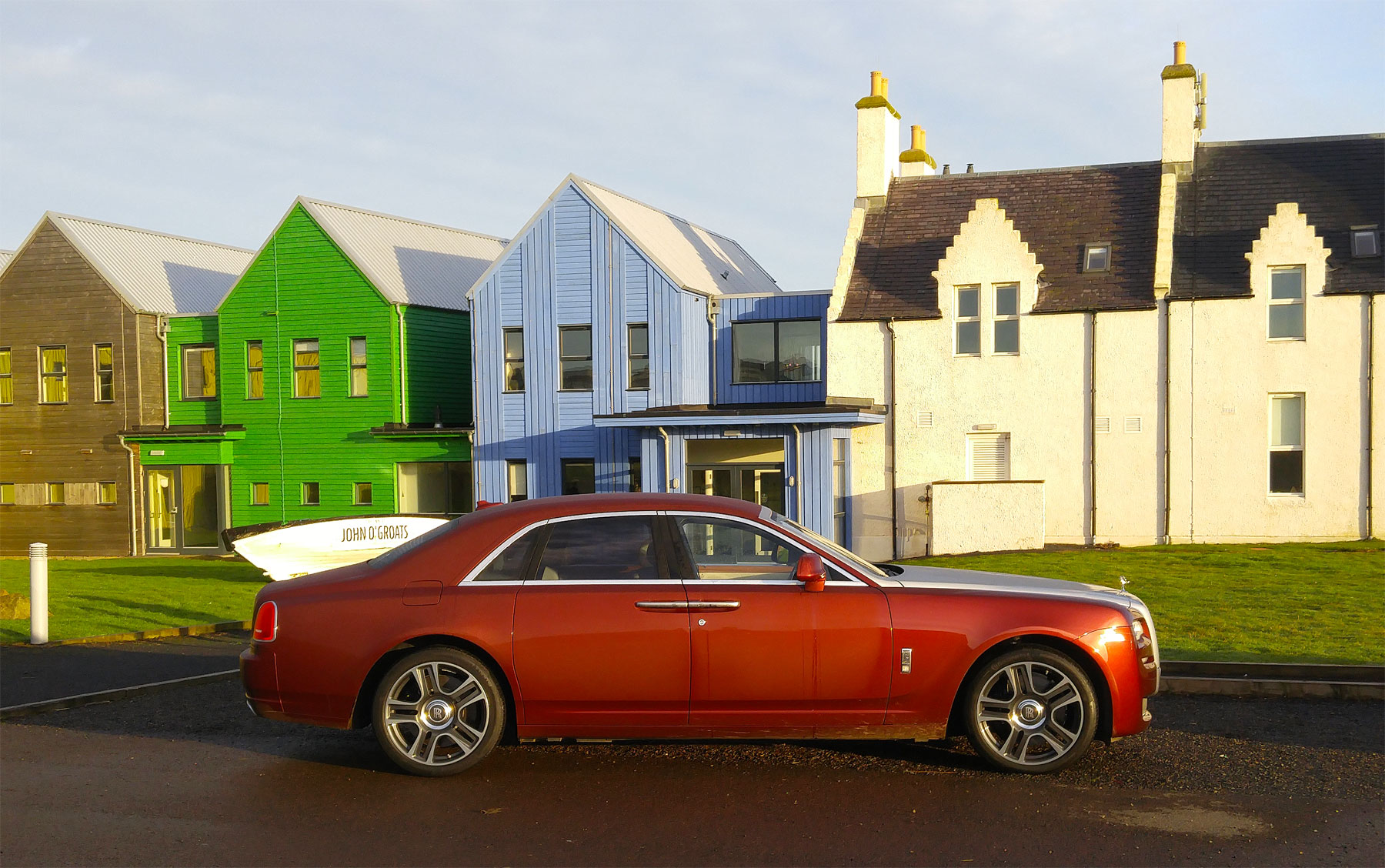 After about 20 minutes driving through the inky black darkness, we turned into the entrance of the Natural Retreats luxury resort and whispered down the long driveway illuminated on either side by the interior lights of the luxury lodges. The silence was deafening.

We parked outside the main resort building but found and heard no-one. It took a few minutes before we spotted a sign stating that our keys were inside a code-protected container.

Our apartment was surprisingly spacious with two double bedrooms, a well-fitted bathroom and an extensive lounge with a fully-fitted kitchen. 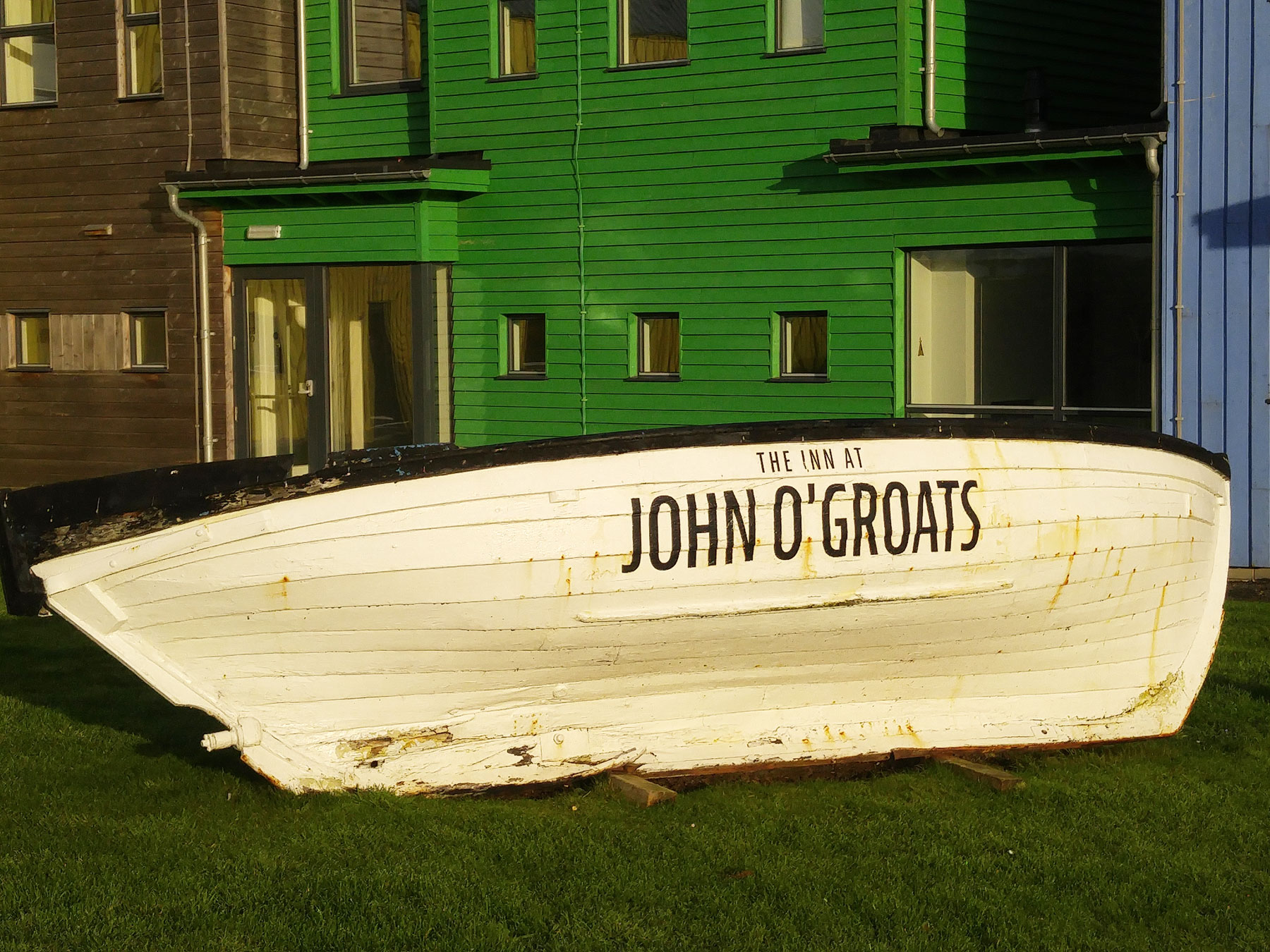 The following morning, I woke before Mike and fixed myself a coffee. The previous night, we’d shut the blinds without any idea of what was outside. As I sat on one of the comfortable hue of the sun rising and opened one of the blinds to be greeted by the glorious sight of a calm sea and a small fishing boat heading out on the open water. If I’d been even a half-skilled painter, this scene would have been immortalised in a beautiful watercolour. 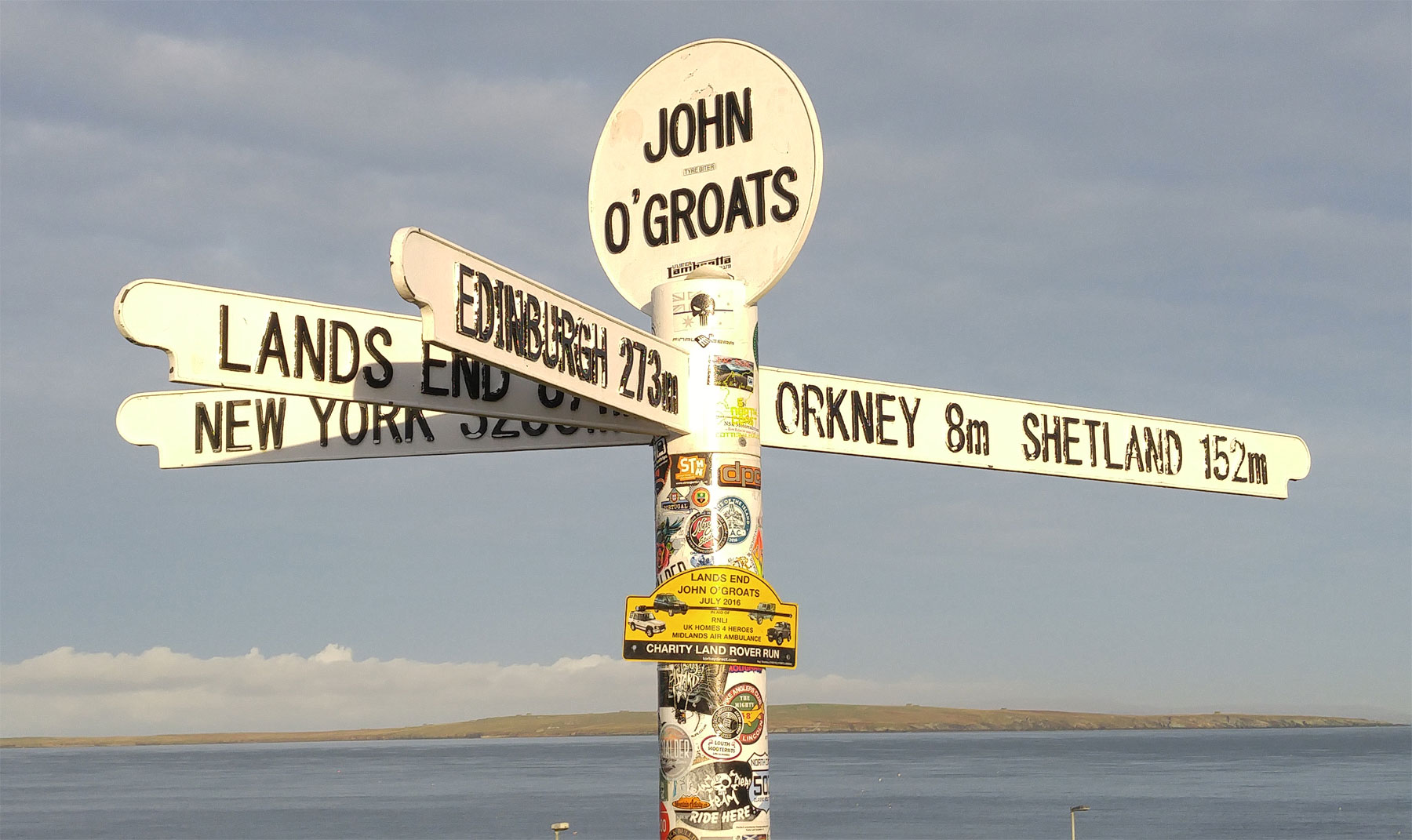 Mike, when he woke, was as captivated as I was. Sightseeing is what John O’Groats is all about, and it’s just about compulsory to take a photograph under one of the world’s most iconic signposts, the one showing the distance between John O’Groats and Land’s End.

Mike’s not what I would call a smiley person when it comes to photographs. At well over 20 stone (mostly muscle) and with a lot of experience in the field of keeping the peace, he cuts a rather imposing figure. But even he was starting to fall for the allure of Scotland as he happily posed for pictures and dare I say it, smiled in a few of them. 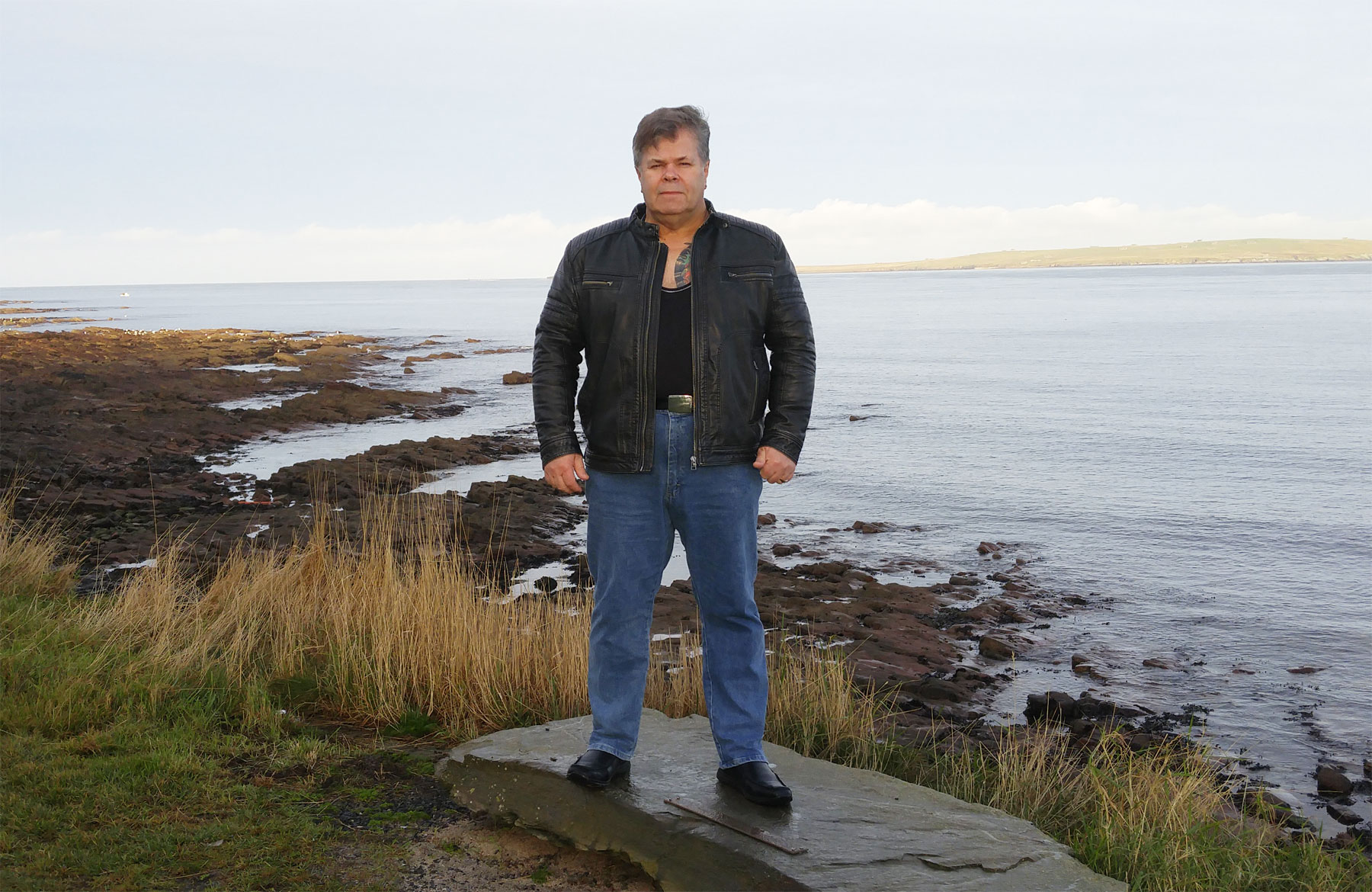 Never having been to the far North of Scotland, we’d been led to expect bad weather, so we were surprised to see the sun shining brightly, a good omen we thought.

We set off for Lochinver in Sutherland, passing through some of Scotland’s most spectacular countryside, though it has to be said that all of the scenery from there to the end of the journey is virtually unmatched and capable of taking your breath away.

We’d planned to visit Duncansby Stacks, huge walnut whip-shaped geological formations jutting out of the sea, but the combination of fine weather, amazing countryside and the effortless power of a Rolls-Royce Ghost meant we completely missed it! 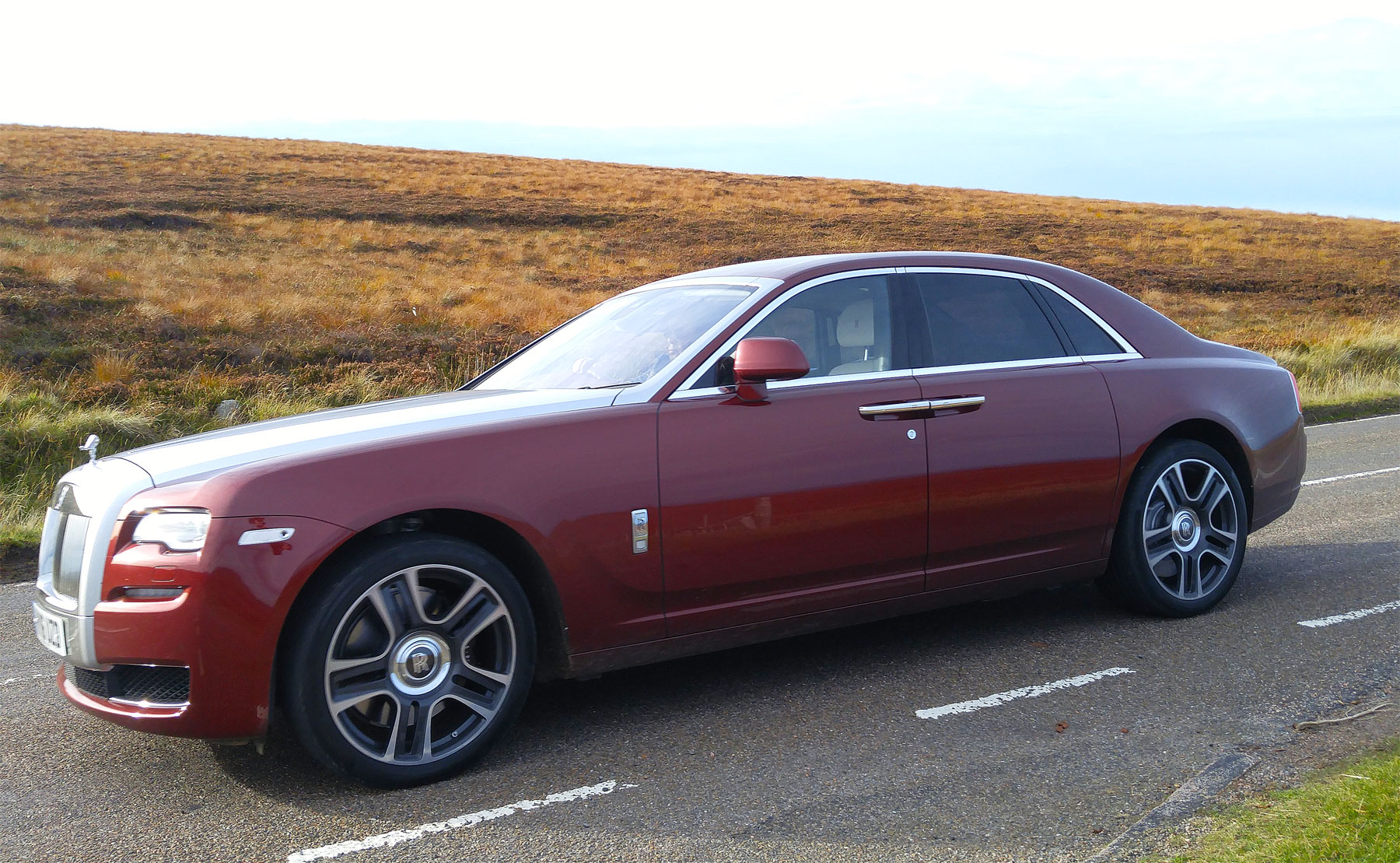 The Ghost is such a pleasure to drive and has so many goodies and luxuries to discover that you rarely want to get out of it. While I was driving I asked Mike to turn on the heated seats. He found a button with a seat icon on it and pressed it. After a couple of minutes, he asked if my seat was getting warmer. I said no, even better, my buttocks are being massaged!

A little later I gave Mike the chance to sit in the back seat so I could chauffeur him and watch as he played with the seat controls and the multimedia, discovered the hidden telephone, and best of all, found the refrigerator.