Pursuing its quest for essentials, the Altiplano collection developed by the Manufacture de Haute Horlogerie Piaget is the ultimate expression of formal purity. This reality is now taking on a new dimension with the Piaget Altiplano Skeleton Ultra-Thin model boasting a double world record: the world’s thinnest self-winding skeleton model (5.34 mm) houses the world’s thinnest self-winding skeleton movement (2.40 mm). It has taken no less than half a century of expertise in ultra-thin mechanical movements to reach these new peaks of achievement. 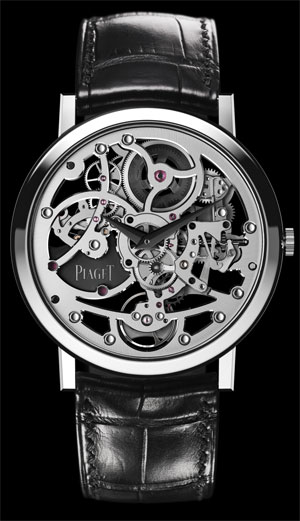 What if all that were left at the end of the day were the hand of the artist and the horological absolute? In this quest for essentials symbolised by the Altiplano collection, the Manufacture de Haute Horlogerie Piaget takes a new leap forward by presenting the Piaget Altiplano Skeleton Ultra-Thin. This resolutely modern and truly exceptional watch not only reveals Piaget’s unique know-how in the field of ultra-thin mechanical movements, but also highlights the skills of the engraving artisans who have constantly pushed the boundaries in this art of extremes in order to make Piaget the specialist of skeleton or openworked movements in the domain of Fine Watchmaking.

Immediately revealing its technical nature and its openworked movement distinguished by its contemporary lines, the new Altiplano watch from Piaget is a concentrated blend of the expertise acquired since 1874 by the Manufacture de Haute Horlogerie Piaget.

The Piaget 1200S ultra-thin skeletonised movement is designed, developed and produced by the Manufacture de Haute Horlogerie Piaget. The House currently offers a range of 18 ultra-thin movements and 5 skeleton movements. At Piaget, credibility has always been built on a tangible reality, which is why the Manufacture de Haute Horlogerie Piaget has constantly renewed and extended its mastery of the highly technical ultra-thin movement segment. Within this long and prestigious lineage, some of the most striking recent accomplishments include the 430P movement (2.1 mm thick) created in 1998, and the 830P (2.5 mm) introduced in 2007. This expertise in ultra-thin movements has also given rise to various complicated calibres (the 600P shaped tourbillon, 880P chronograph. 855P perpetual calendar, 1270 self-winding tourbillon movements). In 2010, Piaget celebrated the 50th anniversary of its legendary Calibre 12P by presenting Calibres 1200P (hours and minutes) and 1208P (hours, minutes and small seconds), the world’s thinnest mechanical movements. At the same time, Piaget paved new paths for the art of skeletonisation or openworking.

Openworking the world’s thinnest self-winding movement naturally called for extreme mastery of this art. Engraving and hollowing this masterpiece without influencing its rigidity – and thus its smooth operation – is a task reserved for the world’s finest artisans. It called for a wealth of work upstream in terms of conception and calculations aimed at redesigning the world’s thinnest self-winding movement without affecting its resistance and its reliability. In order to ensure the optimum rigidity of this Piaget Calibre 1200S, the design itself comes into play, since the long curves extending across the mainplate and bridges harmoniously ensure the necessary overall firmness and resistance.

It took more than three years of research and development to fine-tune Piaget Calibre 1200S. Compared with the Piaget 1200P movement from which it is derived, the new Calibre 1200S comprises a number of innovations. In addition to the micro-rotor in 950 platinum – which contributes to the exclusive nature of this exceptional movement – the balance-bridge also features an harmonious and symmetrical new aesthetic. The hour-wheel bridge has been slimmed down (to a minimum wall thickness of just 0.11 mm) in order to ensure the extreme thinness of this movement that explores uncharted territory in terms of proportions. Perhaps even more remarkable is the fact that this pursuit of the infinitely small is further enhanced by truly exceptional decoration work. The stylistic effect is based on the alternation between matt surfaces – sunray brushed or sandblasted – creating a contrast with the polished angles and the varied rhodiumed or black colours. The eminently contemporary and finely structured Piaget Calibre 1200S takes the art of skeleton-working into a whole new dimension, with resolutely modern lines displaying profound respect for traditional craftsmanship.

The new Piaget Calibre 1200S is housed within a 38 mm-diameter white gold case specifically designed and developed to accommodate it – exactly the kind of ideal interaction between the movement and the exterior that the Manufacture de Haute Horlogerie Piaget masters to perfection. Only this two-fold in-house competencies could have enabled the firm to work simultaneously on the design of both the movement and the case in order to create the world’s thinnest self-winding skeleton watch. This world-first would have been simply inconceivable without such comprehensive internal mastery of the entire range of skills required.