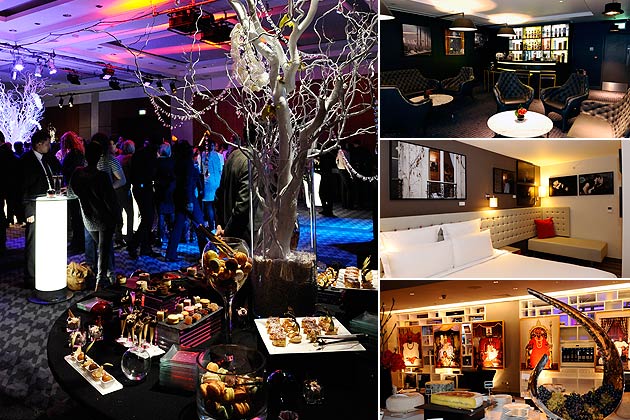 The Pullman Artnight showcased the propertys final design, state-of-the art services and contemporary art collection. After a year-long journey, the Pullman London St Pancras is a European flagship for the global hotel brand.

Situated just minutes from Kings Cross St Pancras station in the heart of the UK Capital, the vibrant hotel features 312 bedrooms, the Golden Arrow restaurant and bar and panoramic views of the London skyline.  There are 17 specially designed spaces for events and business meetings, a 446 seat tiered theatre for arts and corporate use, in addition to a sauna and gym.

Rooms range from Superior to Deluxe and the Deluxe suites (junior suites are scheduled to come in 2014). They  include the Pullman bed, free high speed Wi-Fi, a tranquil rain shower, mini-bar, Roger & Gallet toiletries, a plush king bed, a 40-inch TV, free high speed Wi-Fi, movies on demand, and a work desk, all characterised by modern design. The highly contemporary feel is instantly striking. It takes much of its inspiration from its location drawing on the linear design and colours of the railway with contrasting greys and yellows, and strong lines decorating the public areas. Multicoloured light beams and miniature Bowler hat lamp shades add a touch of humour.

Two bedrooms were transformed into Art Rooms which are still available for overnight stays. French photographer Carole Bellaiche showcases an intimate series of lovers portraits with her, Les Amoureux collection. The works show couples on the brink of intimacy and have a film-like quality that make you feel like you are watching a scene which is about to unfold. The collection is subtly linked to the 1966 film Blow up, directed by Michelangelo Antonioni.

Two floors below is an Oliver Twist themed room by London-based Portrait sculptor James A Matthews. Matthews draws inspiration from the location of the hotel. In 1838, Charles Dickens penned his second novel, Oliver Twist, at 48 Doughty Street, a stones throw from the Pullman Hotel. Much of the novel is set locally, Dickens set Fagins den, at Saffron Hill near the rookery of St. Giles. A pop up art gallery by renowned Nigerian photographer George Osodi is displayed in the lower lounge. A permanent exhibition of works by photographers Liz Hingley, George Osodi and Richard Bellia, part of the Pullman Collection, are on display throughout the hotel which is also an official hotel partner of the world-famous Frieze Art Fair.