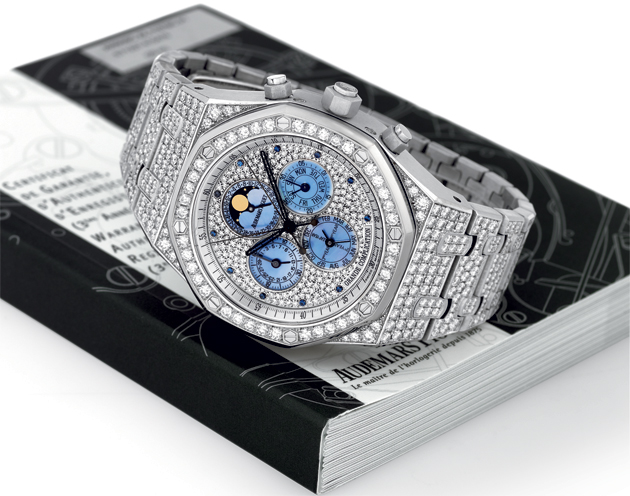 Audemars Piguet is pleased to announce a unique and exceptional sale of Royal Oak models organised by Antiquorum Auctioneers on May 13that the Grand Hotel Kempinski in Geneva.

A total of over 50 rare Royal Oak models will exceptionally be available to purchase coinciding with the iconic model’s 40th anniversary this year. Never such an auction has been recorded in the history of Audemars Piguet’s legendary model, making it the single most important sale of Royal Oak models to date. 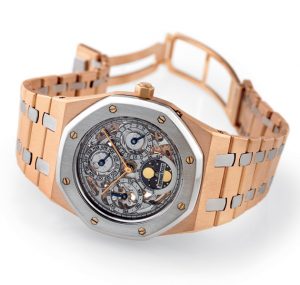 Sale’s highlights will include a Royal Oak A series (1972, jumbo), No 88, the first Royal Oak models in tantalum and 18-carat rose gold, special Royal Oak series such as Sydney to Hobart (1998) and Alinghi edition (2003). The sale will also include complication models such as a Skeleton Royal Oak Perpetual Calendar(1997) and a Royal Oak Grand Complication with fully set with 786 diamonds (2002).

Models such as the Grand Complication are Audemars Piguet’s testament of mastery, artistry and craftsmanship, a true celebration of its origins and tradition taking approximately six months to be assembled and adjusted by a master watchmaker. Royal Oak Offshore models will also be available,  in special limited editions such as the Royal Oak Offshore, Automatic – End Of Days model dedicated to Arnold Schwarzenegger’s famous movie of 1999.

Last but not least the Antiquorum sale will also present several other pieces that belonged to distinguished personalities of our times including a Royal Oak Chronograph, Giorgio Armani No 001in 18-carat white gold, limited series of 10.

An additional highlight of the auction will be the 2012 41mm Royal Oak model in steel (15400ST) bearing the famous “Grande Tapisserie” pattern on its dial in blue colour .Audemars Piguet is pleased to offer the first piece out of production.Its proceedings will go to the Audemars Piguet Foundation which supports the conservation of forests around the world.

Audemars Piguet has closely worked with Antiquorum Auctioneersto ensure the authenticity of each Royal Oak timepiece included in the auction. All time pieces have been returned to the Manufacture in Le Brassus in Switzerland where they have been issued a new certificate of origin.