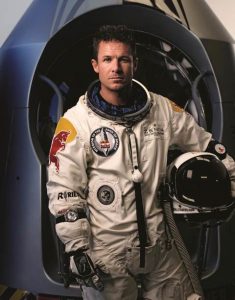 All systems are now “go” for Felix Baumgartner’s jump from the edge of space. The Red Bull Stratos space capsule has passed high-altitude simulation testing after it was damaged in July’s final practice jump, and a launch date has been set for October 8 in Roswell, New Mexico.

ROSWELL (New Mexico) – The final countdown for Felix Baumgartner’s history making jump from the edge of space began on Monday after the Red Bull Stratos Technical Project Director Art Thompson declared the repaired space capsule is fit and all systems are go. The tentative launch date for Baumgartner’s attempt to jump from an altitude of 36,576 meters has now been set for October 8, ending a period of uncertainty for the team and, for Baumgartner, the agony of waiting. The Austrian extreme sport athlete had to endure delays due to the repairs but is now delighted that the countdown is on for his attempt to become the first person to break the sound barrier in freefall and set four other world records in the process. Zenith Manufacture is one of the main sponsors and sole timekeeper of this extremely dangerous mission “I feel like a tiger in a cage waiting to get out,” said Baumgartner, 43, one of the world’s most celebrated B.A.S.E. jumpers and extreme athletes, who in 2003 became the first person to make a freefall flight across the English Channel with the aid of a carbon wing. He will be flying as fast as speeding bullet during his supersonic journey to Earth.

Aviation pioneer Baumgartner and the Red Bull Stratos team have been preparing for years to break the record for highest-altitude jump, eclipsing a mark set more than 52 years ago. The capsule, which at about 1.315 kilogram weighs a little bit more than a VW Beetle, was damaged in a hard landing following Baumgartner’s final test jump from a near-record altitude of 29,610 meters in July – during the jump Baumgartner was freefalling at speeds of up to 864 kilometers per hour, or as fast as a commercial airliner. The Austrian landed safely in another part of the New Mexico desert.

On September 24, the repaired capsule underwent testing in an altitude chamber at Brooks City-Base in San Antonio, Texas. The capsule was exposed to the extreme conditions it will face in the unforgiving environs of the stratosphere. After passing all the tests, the capsule was sent back to Roswell.

A central aim of the Red Bull Stratos project is to collect valuable data for science that could ultimately help improve the safety of space travel and enable high-altitude escapes from spacecraft. The jump will also attempt to break an assortment of records such as highest speed in freefall, highest jump, highest manned balloon flight and longest freefall.

Thompson is cautiously optimistic about the launch date of October 8, while acknowledging that perfect weather conditions are needed for the delicate 850.000 cubic meters helium balloon, which is made of plastic that has 1/10th the thickness of a Ziploc bag.

Mission meteorologist Don Day confirmed, “Early fall in New Mexico is one of the best times of the year to launch stratospheric balloons.”

A Watch for the Ultimate Airborne Challenge 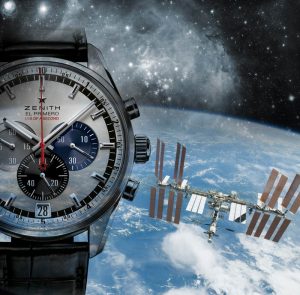 Accuracy and reliability have been the watchwords of the Manufacture Zenith, manufacturer of navigational chronometric instruments for civil and military aviation since 1865. The fact that one of its timepieces will be the first to break the sound barrier in a near space environment with Felix Baumgartner will once again prove the brand’s reliability under extreme conditions. Zenith timepieces are indeed well accustomed to “trials by fire”, such as that undergone by the famous El Primero, the first automatic high-frequency chronograph, that crossed the Atlantic fixed to the landing gear of a Boeing 707 in 1970, on the AF015 flight from Paris to New York. Subjected to drastic changes in temperature, pressure and terrible jolting, it imperturbably maintained its regular cadence of 36,000 vibrations per hour and required no adjustment, having remained accurate to the nearest second – apart from the inevitable timezone difference.

Like all models in the brand range, this model is indeed entirely in tune with the corporate values of authenticity, daring and pleasure. Authenticity, since it embodies the brand’s pioneering spirit and the excellence of traditional craftsmanship. Daring, as reflected in its conception and construction. And of course pleasure, because it is intended to delight the wearer of the watch troughout his dreams.

As the faithful heir of the Rainbow Flyback model developed for the French Air Force in 1997, the Stratos is equipped with the world’s most accurate automatic chronograph movement – the legendary El Primero – as well as the Striking 10th and Flyback functions, making it an eminently suitable partner for Felix Baumgartner’s exploit. Watches and cockpit flight instruments are subjected to abrupt variations in pressure, intense vibrations and violent accelerations – from 9 Gs to 11 Gs. Thanks to its robust construction, the El Primero Stratos can withstand it all – and will be right there with Felix Baumgartner as he tests the edge of the human envelope. 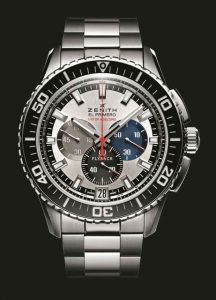 On a visual level, the three different counter colours echo the first El Primero chronograph launched in 1969 with a three-tone dial that was extremely unusual at the time and designed to enhance readability. The darker anthracite-grey colour for the hours counter at 6 o’clock accentuates the length of time being recorded, while the light-grey colour of the small-seconds counter at 9 o’clock symbolizes the fleeting nature of time, and the midnight-blue minutes counter at 3 o’clock epitomizes the intermediate nature of this unit of measurement.

In addition to the chronograph, the El Primero Stratos is also equipped with the Striking 10th function, which serves to read off 1/10ths of a second and is combined with the flyback mode that is particularly useful in the field of aviation and a favourite with pilots – since it enables instant resetting of the chronograph functions in one smooth, easy move.

This mission in the stratosphere will test the reliability of Zenith watches under the most extreme conditions: temperature, low pressure, speed, friction, impacts, etc. If the jump is successful, Zenith will be the first to have a watch cross the sound barrier in a near space environment. Zenith CEO Jean-Frédéric Dufour explains what spurred him to participate in this mission: “We have often been forerunners in unexplored domains and we have accompanied people in there most incredible projects. It is this ability to come up with new ideas, and then push through with new technical developments before anyone else, that is most fascinating at Zenith. Our watches have participated in some of the grandest human adventures: explorer Roald Amundsen’s discovery of the North and South Poles; Mahatma Gandhi’s peaceful fight for India’s independence; the laying of the foundations of ecology by the learned Prince Albert I of Monaco; Louis Blériot’s Channel crossing; John F. Kennedy’s political action; intrepid explorer Colonel John Blashford-Snell in various endeavours such as his latest expedition to Nepal; as well as Johan Ernst Nilsson in his daring Pole2Pole mission. Felix Baumgartner is made of the same stuff as these pioneers and we are very excited that the El Primero Stratos Flyback Striking 10th will accompany him on his exploit.”