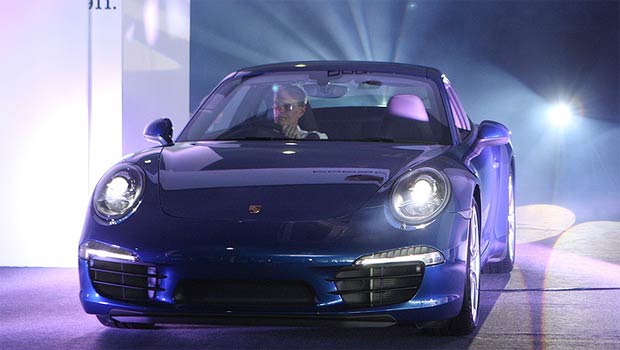 The lifestyle, the driving pleasure, the Porsche experience – it was all uncovered at the launch of the new Porsche 911 Carrera and 911 Carrera S that took place on 17th February 2012 at the Sepang International Circuit. This new iconic sports car was unveiled by Sime Darby Auto Performance (SDAP), the official Porsche importer in Malaysia. The momentous occasion marking the arrival of the seventh generation of the 911 was witnessed by Porsche customers, friends and media.

Other than the main superstar of the day, the new 911 Carrera and 911 Carrera S, guests were also entertained with a myriad of showcases on previous generations of the classic sports car, other models and highlights of recent events such as the Porsche Circuit Training Session 2012. Arnt Bayer, Chief Executive Officer of SDAP, greeted the crowd and gave an enthusiastic speech to start the event stating that 911 is the icon of Porsche, this is the heart and soul of our brand, this is an indication that we will continue to focus on our sports cars, with more upcoming motorsports events here at Sepang that will showcase our sports cars’ performance. The event was further accentuated with the extravagant arrival of the new 911 Carrera S, driven out by Christer Ekberg, Managing Director of Porsche Asia Pacific.

One of the highlights of the launch was the lucky draw that picked 50 lucky winners for the chance to ride in the new 911. The Taxi Ride, as it was called, gave chances for guests to experience exhilarating joyrides in the 911 Carrera S. Another exciting highlight was the specially arranged 911 GT3 Cup Car, where 20 lucky guests were chosen to ride a lap each around the circuit with Melvin Moh, one of the young and upcoming drivers in the Malaysian motorsports. He raced successfully in numerous Formula series as well as the Famous Malaysia Merdeka Endurance Race.

The atmosphere of the event was one of pure excitement and prestige, in concurrence with the launch of one of the most sophisticated and technologically-advanced sports car in its age – the new 911 Carrera and 911 Carrera S.

About the new 911 Carrera 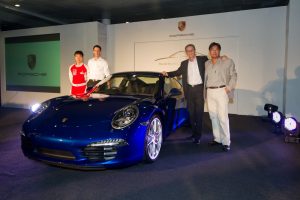 The 911 offers up to 16 percent lower fuel consumption and emissions combined with greater everyday practicality, courtesy of its all-new lightweight body, further drive-train efficiencies and new suspension systems. Due to premiere on Malaysian grounds on the 17th February 2012, the new 911 raises the driving dynamics bar yet another notch with completely revamped suspension featuring numerous redeveloped components.

The wheelbase is now longer, and combined with wider track width at the front, it gives way to a more sure-footed tracking and roll stability at high longitudinal and cornering speeds. The innovative aluminium steel lightweight body, combined with a raft of new components and functions, benefits efficiency and driving dynamics in equal measure. With an overall length of just 4.5 metres and an unchanged maximum width of approximately 1.8 metres, the new 911 remains as the most compact sports car in its class.

The stylistic evolution of the 911’s design is distinct from every angle. Viewed from the side, new styling, larger alloy wheels and the more protuberant windscreen endows the 911 with an even jauntier, more coupe-like character. To augment the new exterior, Porsche designers created an interior architecture which takes its cue from the Porsche Carrera GT. The driver is integrated more closely with the cockpit, made possible by the centre console that rises up to the front with the high-mounted gear lever or gear selector located close to the steering wheel in typical motorsport fashion. The classic and established Porsche touches, such as the five round instruments with the centrally located rev counter and the ignition lock to the left of the steering wheel are also found in the new model.

All Coupés get by with significantly less than ten litres of fuel per 100 kilometres. Fuel consumption and emissions are up to 16 percent lower compared with its predecessor. The Carrera with the new 350 hp, 3.4-litre boxer engine and optional Porsche Doppelkupplungsgetriebe (PDK) consume a mere 8.2 litres per 100 kilometres based on the NEDC – 1.6 l/100 km less than its predecessor. Also, at 194 g/km CO2, it is the first Porsche sports car to make it below the 200 g/km mark.

Direct injection in the engine is now provided by multi-hole injectors, which accomplishes smooth running and matchless power by improving mixture formation. Through new aluminium camshaft positioners, the weight of each engine has been reduced by about one kilogram and the possible maximum engine speed was raised to 7,800 rpm. All in all, the new 911 engine is up to 16 percent more economical and up to 15 hp more powerful than that of its predecessor.

The prices of the new models will be communicated shortly. They will include a 4-year free maintenance and warranty program with market-specific equipment.