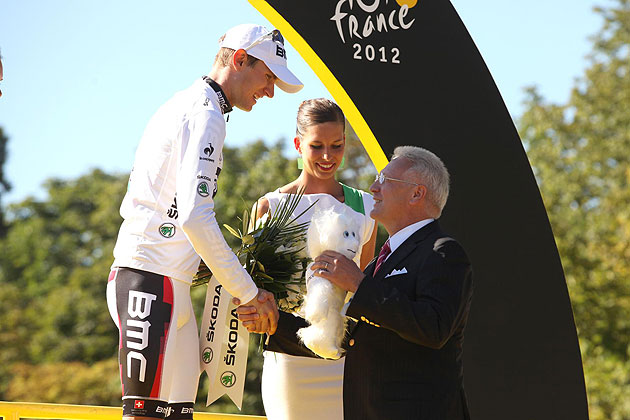 Czech car maker ŠKODA views its sponsoring of the Tour de France 2012 as a great success.

At the finish of the three-week cycling event, ŠKODA CEO Winfried Vahland awarded trophies to the winners of a total of four categories, including the wearer of the Yellow Jersey, Bradley Wiggins from Great Britain. The winner of the White Jersey, Tejay Van Garderen from USA, received a special trophy from ŠKODA.

This year, ŠKODA sponsored the Tour de France, which ended Sunday on the Champs-Elysées in Paris, for the ninth consecutive time.

ŠKODA CEO Winfried Vahland said: “The Tour de France is the number one cycling event worldwide since decades. We are happy that we contributed to a fantastic Tour in 2012. Our sponsoring reached millions of fans by the roadside and a billion-strong international audience in the media.”

ŠKODA provided the Tour de France organisers with about 110 cars. In addition, the brand was partner of the White Jersey for the best cyclist under 25 years of age. “As the premier class of cycling, the Tour de France fits perfectly with ŠKODA – not just because of its dynamic nature, but also because of its history: ŠKODA began its success story in 1895 as a bicycle maker,” said Vahland. ŠKODA was highly visible in every phase of the day’s stages thanks to large-format advertising letterings in the starting and finishing areas as well as on the roads.

The crowning conclusion of ŠKODA’s commitment was the handover of the winner’s trophies by Prof. Vahland to this year’s tour winner Bradley Wiggins from Great Britain and the winners in the other categories (White Jersey – Tejay Van Garderen from USA as best junior professional under 25 years; Green Jersey – Peter Sagan from Slovakia as best sprinter; Dotted Jersey – Thomas Voeckler from France as best mountain racer). ŠKODA Designer Peter Olah took part in creating the trophies, which are hand-made by Bohemian glass artists.

This year’s Tour de France was another show of exceptional cycling action as around 15 million spectators flocked to the roadsides, while another two billion viewers all over the world watched it on TV. Only the football world cup and the Olympic Games achieve a higher viewership.

Besides ice hockey and ŠKODA Motorsport activities, cycling is the most important pillar in ŠKODA’s sponsoring strategy. This includes a commitment to cycling as a popular sport, such as the support of the Czech ‘Cycle for Life’ event and the ‘Velothon’ in Berlin.