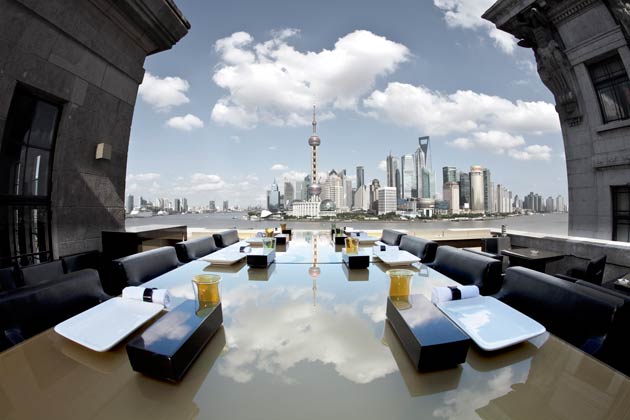 Up until about a decade ago, Shanghai was no one’s choice for luxury travel. Sure, “see China” they said: visit Beijing to sample some culture, then afterwards catch some shopping and fine dining in Hong Kong.

Shanghai, if it was visited at all, was the domain of businesspeople. The city of before, of pre-War, of pre-revolution, had been forgotten in a fit of global amnesia. What a mistake to take that attitude today…. Shanghai has been born again, bigger, better and with more bling than ever before. 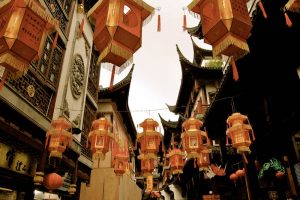 The mystery unfolds through the following combination: China’s national ambition to make money, coupled with the flexibility and hard work of some 25 million Chinese, who live in Shanghai. The city hosts a vast number of domestic and international firms who produce a rumoured 40% of China’s total tax take.
So there should be no surprise that the people which have created this wealth have needed some pretty cool spots in which to enjoy their extra cash. Now, despite a continuing financial crisis overseas, and even with the potential crippling spectacle of a pan-China manufacturing slowdown, Shanghai continues to build the finest in hotels, restaurants and other high-end destinations. All feature the mix that makes Shanghai great: Chinese touches on a cosmopolitan nature that is the blood and heritage of the Shanghainese.
Get to Know 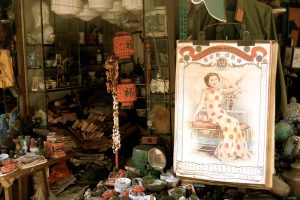 Any visit to Shanghai demands a walk along its riverfront. This is the famed Bund, actually the original British Concession, started after the end of the first Anglo-Chinese Opium War. The Huangpu River rolls and bends, causing the numerous barges and container vessels to steer a gentle curve around Pudong Point.
The river has little care for the drama of its past or one wonders, the luxury of its present. Though some of the original Occidentals arriving in 1840s Shanghai may have dreamt of making their fortunes here, not one of them could have imagined just how amazing their new city would be some 170 years later. From offering practically no international up-market goods in the 1990s, today Shanghai is a dining and shopping paradise for all who visit.
And with the opening and success of numerous top-end hotels this fun is on offer for anyone to taste.
Begin your Shanghai holiday in one of these fantastic hotels. Perhaps it is the Japanese-inspired minimalist-yet-luxurious, interior design of the Park Hyatt. This hotel is celebrating its fourth-year anniversary this month. The highest hotel in mainland China, set atop Shanghai’s thrusting and tallest building, remains a unique temple to modernity. The best-trained staff members in town seamlessly guide you from spa to pool to enticing dining options. Back on the colonial-era bund lies a gilded art-deco re-mixed palace: the Peninsula. The sprawling property that even includes the old British Consulate is the first new building on the famous waterfront in 63 years, and it bleeds luxury from each of its individually designed public and private rooms. 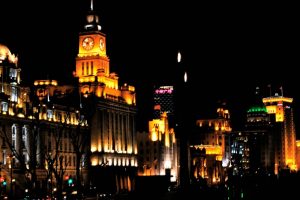 Many terraces at different levels give one the option of being a part of the landscape, or standing above it all. At the other end of the Bund is another must-see, the Waldorf Astoria. Using their brand in Asia for the first time, the hotel could not have chosen a better location. The 1910 building was the home to the exclusive – only wealthy British Taipans need to apply for membership then – Shanghai Club. This historic property allows residents and diners to enjoy the best of this opulent past, while the new tower and restaurant section is the definition of modern comfort. However, these are just three of the 5-star hotel jewels awaiting you in China’s number one city.
The Bund houses three other must-do destinations on your top-notch tour through the city. The first is the outrageously successful Mr. and Ms. Bund, a creation of traditional and inspirational French fine fare and wine. Just upstairs is Bar Rouge, the bar rumoured to have sold the most champagne on the planet in 2006. Both are housed in Bund 18, one of the first old banking houses along the waterfront to be renovated. The red-on-white interior is a mix of smoothly textured Carrera marble, enhanced with red Murano glass fixtures. A new arrival at the Bund is the bistro Mercado, by the world-renowned chef Jean-George Vongerichten. What could be more comfortable – in a Starship Enterprise kind of way – than a warmly created rural Italian interior with the views of the lit-up Pudong waterfront directly in the forefront? Wouldn’t the building’s original banker owners have enjoyed that traditional wood-burning pizza oven back in 1920!
Getting Deeper 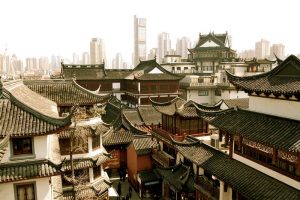 Moving past the Manhattan feel of the waterfront, the time has come to explore the city. Next to the Bund, the city’s most interesting neighbourhoods are all within the pre-WW2 French Concession. Started soon after the British won their right to do business in Shanghai the French were muscling in to do some business of their own. Much of what was built during the almost 100 years that the French ruled this district remains today.
This district, in the south-central section of the metropolis, is several square kilometres of tree lined streets of fine residential architecture that was originally home to most of the influential pre-WW2 figures in China. Whereas these politicians, gangsters and literary figures have long-ago left us, in their place is a new commercial Chinese culture.
The first of these new French Concession neighbourhoods is Xintiandi, an up-market creation of international talent and big finance, which was completed in 2001. Come to Xintiandi for a very comfortable take on old Shanghai: original residential buildings refitted as top-end shops and mid-to-top-end restaurants.
Its success has made it an urban development model for all of China, where shopping and dining used to mean huge, energy inefficient mega-malls. 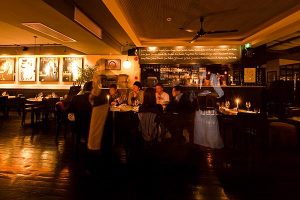 One of the finest restaurants in Xintiandi is T8, which prides itself on offering the freshest takes on an international melange of food choices. The pan-Asian interior is comforting as well as contemporary. For the purists there is the nearby Art Salon, a unique restaurant concept where two brothers – an artist and a chef – have teamed up to turn their modest former home into a place for art display and the best traditional Shanghainese food in town.
A bit further up the road is el Efante, which stands out as the clear winner in the fusion category: deliciously melding the delicacies of France with the tapas traditions and regionally specific ingredients of Spain.
Your experience will be boosted by dining in the beautiful terrace of the 1930s mansion, and enjoying the top-notch service staff.
In the western part of the French Concession there are two other areas that should not be missed. The first is Tianzifang, an ever-growing bohemian village of shops and restaurants. Unlike Xintiandi with its larger restaurants and piazza-style spaces, Tianzifang has sprung up organically amidst an un-renovated residential community. Thus rental prices are low enough to allow the really creative to try their hand at entrepreneurship. Expect to find Shanghai’s most interesting shopping here, especially if you prefer straying from the safety of internationally available products. Further to the west is Ferguson Lane, home to Franck, one of the most-loved bistro-styled restaurants in the city. The streets around Ferguson Lane are still largely untouched and residential, giving an authentically romantic feel to your postprandial constitutional stroll.  In a city as large as Shanghai there is no way of course to see everything.
Thus hiring an expert to deliver you the parts you want to see is a requirement for those in the know.
Luxury Concierge China (www.luxuryconciergechina.com) provides anything you could need during your stay to make it a memorable and multi-faceted one. Their local knowledge is unparalleled, leaving you with the confidence to say you’ve truly been to Shanghai.