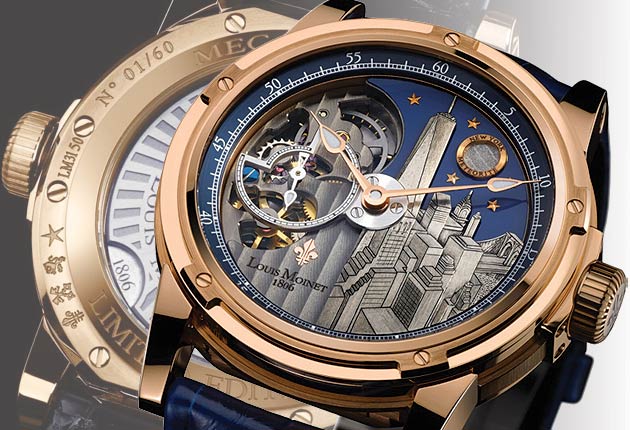 Baselworld is an unbelievably spectacular watch fair that attracts well over a hundred thousand visitors a year. For that reason brands plough a huge amount of financial resourses to achieve the maximum effect. Many of the extraordinary models on display are prototypes developed especially for the occasion. Ultimately this means that watch writers (like myself), enthusiasts and retailers can try on these magnificent timepieces. Unfortunatley I wasn’t able to attend the event this year due to a serious accident. However I did publish three articles highlighting my favourites watches on my own website. One of my selections was the wonderful The ASTROLABE Tourbillon from high end watchmaker Louis Moinet.

My first contact with Louis Moinet was via CEO and Creative Director Jean-Marie Schaller. About a year ago he read an in depth review I had written about the fantastic Montblanc Nicolas Rieussec Chronograph Open Home time. He enjoyed the editorial but wanted to alert me to the fact it was Louis Moinet that invented the chronograph rather than Nicolas Rieussec (as I suggested). Since then I have become a huge admirer of the brand and have recently featured their Dragon Tourbillon on my website.

As well as unveiling the ASTROLABE Tourbillon and Dragon Tourbillon at Baselworld they also presented the exquisite Mecanograph New York. Dimensionally the watch is smaller than the other two models measuring only 43.50mm x 15.60mm. These modest proportions should appeal to a wide variety of buyers including the unisex market. I also suspect a watch of this size should sit fairly comfortably on the wrist. Primarily this is down to the stylish case design and selection of materials. Currently the timepiece is available in a choice of grade 5 titanium and opulent 18-karat rose gold.

Visually the Mecanograph New York has an exceptionally high quality appearance, which is synonymous with the brand. What makes this watch so amazing is the meticulous attention to detail. I love the intricate hand engraved illustration of the New York cityscape and piece of meteorite on the dial. Other sensational features include the “Gouttes de Rosée” dewdrop style hands and open-heart view of the mechanical movement (located at 9 o’clock). Overall the composition is sophisticated and the finishing absolutely first rate.

To power the watch, Louis Moinet has developed an accomplished self-winding movement with Swiss company Concepto. The Calibre LM31comprises 26-jewels and oscillates at a frequency of 28,800 vibrations per hour. Each of the 182 individual components has been expertly assembled and decorated by hand. Functionally the Mecanograph New York features hours, minutes and small seconds. The watch also has a power reserve of approximately 48 hours and is water resistant to a depth of 50 metres.

The Mecanograph New York is limited to 60 pieces (of each model) and has a hand-sewn Louisiana alligator leather with double folding clasp.

You can read more watch reviews by Steve Huyton on his own website www.totalwatchreviews.com