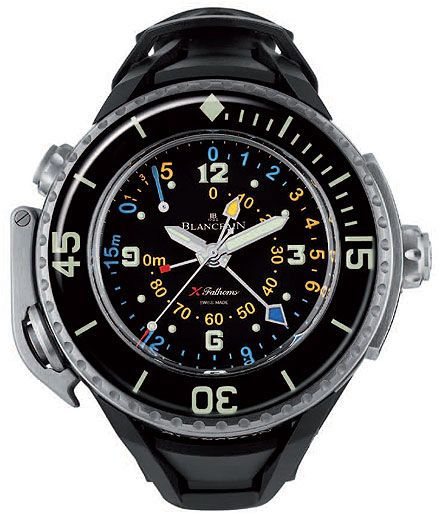 During a spectacular event at the largest aquarium in the world, the Dubai Aquarium & Underwater Zoo in the Dubai Mall. Blancpain revealed its latest diving watch. The Blancpain X Fathoms watch, revisiting the characteristics of its iconic 1953 ancestor, and combines them with a mechanical depth gauge to create the most high-performance mechanical diving watch ever produced.

Depth measure up to 90 meters and maximum depth reached memory, separate indication on the 0-15m scale with an exceptional +/- 30 cm precision, retrograde 5-minute counter for decompression stops, the X Fathoms concept watch abounds in world firsts. Its movement, reference 9918B, is based on the Manufacture-made Calibre 1315, which has already proved its worth by successfully powering several models in the Fifty Fathoms collection. Self-winding and equipped with three barrels ensuring a five-day power reserve, it is provided with a silicon balance-spring to withstand magnetic disturbances. Its imposing 55.65 mm case made of satin-brushed titanium is water-resistant to 30 bar.

It features a helium decompression valve for saturation diving and the unidirectional rotating bezel characteristic to the collection for almost 60 years.

Research and testing conducted by Blancpain show that the elastic properties and the resistance to permanent deformation of amorphous metal make this material ideal for the depth gauge membrane. This choice allows to reduce its thickness by half compared to steel and gain in precision. It also allows avoiding the risk of micro cracks formation given the long-term stability of the alloy. However, the non-linear nature of the membrane deformation had to be corrected. The ingenious solution to this problem is given by the asymmetrical toothing of the rack and pinion that linearises the curve of the membrane deformation. The individual calibration of each X Fathoms guaranties maximal precision of depth indications.

Displays result from in-depth research to offer optimal legibility, with central depth indication hands, matt black background colour to enhance contrast and three-colour luminescence to distinguish indications useful underwater. The most complex injected rubber strap ever conceived gives the final finishing touch. It comprises 14 articulated parts to ensure a perfect fit on the wrist and allow water to seep in under the watch in order to come in contact with the membrane under all circumstances.

Blancpain distinguishes itself by the attention it devotes to wearers’ needs and to the user friendliness of its timepieces. 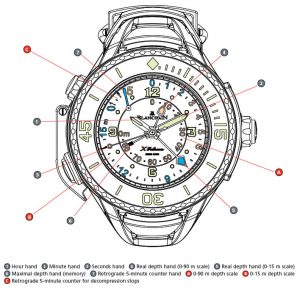 Since the Blancpain X Fathoms is a diver’s watch, displays are the object of in-depth research in order to optimise readability:

Central hands to enhance the legibility of the indications
A seconds hand to provide visible confirmation that the watch is running smoothly
A clearly visible minute hand that is easily told apart from the hour hand
Luminescence used only on the indications that are useful when diving
• Orange colour, easily readable at great depths, for the 0-90 m scale
• Blue colour for the 0-15 m scale
• Green colour for the hour, minute and seconds indications, as well as for the unidirectional rotating bezel

Since the final decompression stop before reaching the surface is vital, the X Fathoms incorporates original features providing divers with the information required to undertake this phase in the best possible conditions.
Depth indication on the 0-15 m scale for enhanced precision in this zone
Depth markers from 3 to 6 m highlighted by their orange luminescence
Retrograde 5-minute counter clearly readable and easily activated by a pusher

The 9918B movement, a calibre that has already proved its worth
The 9918B movement powering the Blancpain X Fathoms is based on the Manufacture-made Calibre 1315. Self-winding and equipped with three barrels ensuring a five-day power reserve, the latter has proved its reliability by successfully driving several models in the Fifty Fathoms collection. Adapting it to this model involved creating a new baseplate, eliminating the date indication, and adding a silicon balance-spring, as well as a retrograde counter.

Amorphous metal
The research and testing conducted by Blancpain have shown that amorphous metal is the ideal material from which to make the depth gauge membrane. This metal alloy, featuring an atomic structure that is not crystalline but instead disordered, is particularly suited to meeting the demands of the Blancpain X Fathoms due to its elastic and antimagnetic properties, its exceptional resistance to permanent deformation, and its long-term stability. Moreover, this material also enabled developers to limit the membrane thickness to less than one mm, with +/- 2 μm tolerances. Blancpain thereby becomes the first watch manufacturer to use the properties of this material to perform a measurement – and one that offers the additional benefit of exceptional +/- 30 cm accuracy.

Modus operandi of the Blancpain X Fathoms Watch
When the diver begins a descent, the pressure of the water exercised on the membrane deforms it and displaces the feeler-spindle fixed in its centre. Using a transmission lever and a rack, the linear displacement of the feelerspindle is transformed into angular displacement transmitted by a gear crossing through the movement towards the axis of the depth gauge hands. The hand indicating the depth on the 0-90 m scale plays the main role. As it moves, it drives the 0-15 m hand and the maximal depth hand (memory). The indication on the 0-15 m scale undergoes a reduction enabling it to display ¾ of a revolution. When the diver reaches a depth of 15 metres, the 0-15 m hand stops. If the diver continues the descent, the two other hands continue to run.

At a depth of a little below 90 metres, the membrane reaches its maximum deformation and pushes up against the concave stop. Since the watch is watertightness tested to 37.5 bar, the diver can continue the descent without any worries. During the ascent, the two instant indication hands are steadily pulled back by a spiral spring and return to 0 when the diver reaches the surface. The maximum depth hand indicates the maximum depth reached by the diver until it is reset via a pusher at 8 o’clock. The latter is protected during the dive in order to avoid any accidental operations.

Rack
The non-linear nature of the membrane deformation had to be corrected by an original solution consisting in creating a rack and pinion featuring asymmetrical toothing that linearises the curve of the membrane deformation. In order to avoid potential geometrical and dimensional variations due to the different components, the precision required in manufacturing the rack and pinion was achieved using the deep X-ray lithography process known as LIGA (an acronym based on the German words Lithographie, Galvanoformung, Abformung). With this adjustment, each 0.01 mm of membrane deformation corresponds to a depth of one metre. 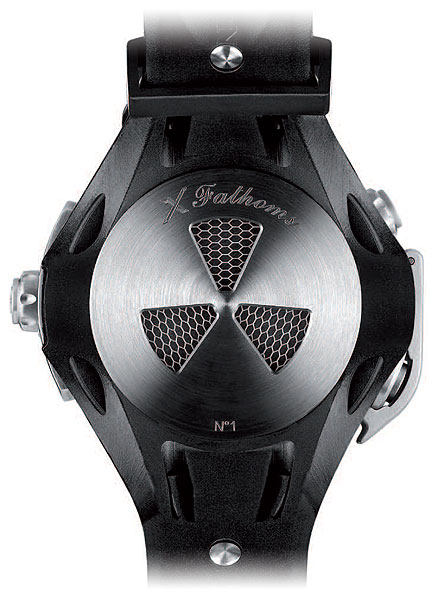 Calibration
A measuring device has been specially created to place the mechanism under pressure so as to test the membrane deformation and adjust the display of the indications. These adjustments are facilitated by the mobile base of the transmission lever. Each membrane is individually tested in order to make the necessary adjustments.

The Blancpain X Fathoms Strap
The strap fitted on the Blancpain X Fathoms is the most complex injected rubber strap ever conceived. The reasons behind its development are both functional and aesthetic. Its variable-geometry structure is composed of 14 articulated parts. It has been specially designed to ensure a seamless fit with the case, while allowing water to seep in under the watch in order to come in contact with the membrane. Its shape resembles that of a cuttlefish and the incisions evoking the gill slits of manta rays highlight the underwater vocation of this watch.

Finishing on the Blancpain X Fathoms Watch
Blancpain is naturally not merely introducing an innovation, but also celebrating its tradition as a Fine Watchmaking manufacturer by creating a timepiece boasting meticulous finishes that make each component an exceptional part in its own right.

Please note that the Blancpain X Fathoms watch does not replace a diving computer that remains an indispensable instrument, but instead serves to complement the latter. Carefully read the operating instructions and the warnings they contain before using the X Fathoms watch.