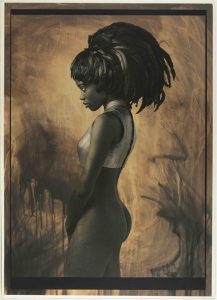 The Little Black Gallery is proud to announce Bob Carlos Clarke: One-offs from 28 May – 30 June 2012. This unique show of one-off photographs by the legendary photographer includes many never seen before and available to buy for the very first time.

Described as “one of the great photographic image-makers of the last few decades” by Terence Pepper, Curator of Photographs at the National Portrait Gallery, this exhibition gives the public and collectors a rare opportunity to view and buy unique Bob Carlos Clarke photographs.

All the pictures have been chosen by his widow Lindsey Carlos Clarke from the extensive archives. Many are handcoloured, distressed, or were printed once and then left unseen until now.

Bob Carlos Clarke was born in Cork, Ireland in 1950, and came to England in 1964 to study art and design at The West Sussex College of Art where he developed an interest in photography. He then went on to The London College of Printing, before completing his degree at the Royal College of Art in 1975. He worked in almost every sphere of photography, winning numerous awards for his high-profile advertising campaigns, recognition for his photojournalism and portraits of celebrities, and international acclaim from collectors of fine prints. He died in 2006.