The Keehn Family Collection includes the powerful, bold and expressionistic Keehn Family Portrait (estimate: $100,000 – 150,000) painted by Maqbool Fida Husain. Husain captures a poignant moment from 1959 during the time when the Keehn family lived in India. 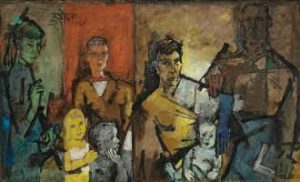 Mr. Praful Shah, Chairman of Garden Silk Mills is a true visionary bridging tradition and modernity, with deep insight and love for the arts of India. Highlighting Garden Silk Mills Ltd: The Chairman’s Collection is Tyeb Mehta’s Untitled (Figures with Bull Head estimate: $1,500,000 – 2,000,000). Belonging to the suite of works created at Santiniketan in 1984, this painting is situated formally and philosophically at a major turning point in Mehta’s life and illustrates a maturity of style.

Among the sale highlights is Akbar Padamsee’s Cityscape, executed in 1959 during the artist’s Gray Period for his first solo exhibition in Bombay after spending nearly ten years in Paris. The exhibition was a breakthrough event in the Indian art scene. Inspired by the Bombay landscape, this painting is among the finest of Padamsee’s oeuvre. Painted at night in the badminton court outside Padamsee’s home in Juhu, Cityscape is a meditation on the colour gray, on line, form and movement. It captures the change of light throughout the night – from the cooler tones of the moon light to the warmer tones of the breaking day. 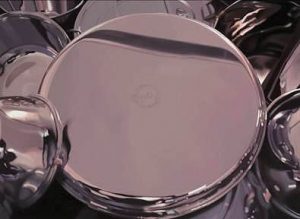 Kicking off the contemporary selection is an untitled work by Subodh Gupta from his iconic series on stainless steel utensils. Crawling House by Zarina, one of the group of artists who represented India at the 54th Venice Biennale in 2011, is an installation featuring hundreds of miniature rooftops that signify her preoccupation with the idea of home, memory and the impermanence of both.

Also featured in the sale is Rashid Rana’s The World is Not Enough (estimate: $40,000 – 60,000). An exquisite example of Rana’s use of pixilated images, this work is composed of photographs taken mostly from a landfill outside of Lahore. Reduced to miniature pixels, the details that form the larger image are in fact thousands of images of trash digitally stitched together. This work is an examination of urban decay and serves as a larger comment on superficiality, consumerism and disposable culture.

Capturing the spirit of the time, the contemporary artists of the region, like the modernists before them, carry the essence of South Asia that never ceases to provide creative inspiration. Today, the young South Asian artist responds to a new global artistic vision making this an exciting time to endorse the creative forces of South Asia.

Having Grey Windows Could Significantly Increase the Value of Your Property