The Ferrari Myth exhibition has officially opened at the Italian Center in the Shanghai Expo Park. The inauguration ceremony was attended by the company’s Deputy Chairman Piero Ferrari, and representatives of both the Chinese and Italian governments.

The Ferrari Myth exhibition at the at Italian Center at Shanghai Expo Park covers an area of 900 square metres and will be open to the public for three years. Its aim is to introduce the Chinese people to Ferrari and allow them to experience at first-hand to the history, cars, technologies and passion of the Prancing Horse, thereby further consolidating the already strong links between the Italian marque and this nation.

“For millions of people around the world, Ferrari represents the pinnacle of Italian culture,” declared Piero Ferrari. “It is a symbol of passion, success and the constant pursuit of excellence. It has always been our wish to share Ferrari’s unique history and culture with the people of China who have shown great affection for the Prancing Horse and with whom we share core values such as respect for tradition and a tenacious spirit of innovation.” 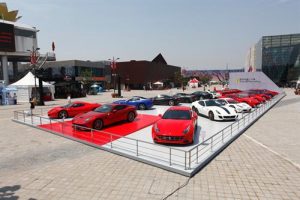 China is now a key market for Ferrari and, significantly, this is the first time the company has organised such a long-term, broad-ranging exhibition outside of Italy. The latter will also be continually updated throughout its run to document the ongoing evolution of the company and its products.  The Ferrari Myth exhibition is designed to introduce visitors to the marque’s past, present and future. It centres around the factors that make it so unique with a focus on also the challenges of reducing fuel consumption and emissions.

In its first 12 months, the Ferrari Myth exhibition will be divided into five areas: Ferrari in China, Green, Product, Design and Racing. The text, images and videos on display, as well as the large number of priceless objects that have been brought in from the Ferrari Museum in Maranello, will provide a vivid depiction of Ferrari’s glorious history. The centerpiece of the Ferrari Myth exhibition is made up of 5 eye-catching Ferraris that were selected for their special significance: the 348 TS as the first Ferrari to enter the Chinese mainland market, a 275 GTB4, a 365 GTB4 Daytona; the 750 Monza sports prototype and the FF, Ferrari’s first four-seater four-wheel drive model.

Ferrari’s commitment to tackling future technological challenges and to developing efficiencies is symbolised by the HY-KERS system which combines a traditional Ferrari V12 engine with two electric motors. Also present is a scale model of Ferrari’s “green” campus in Maranello which boasts ultramodern infrastructure inspired by the Formula Uomo programme. The factory itself is now also completely self-sufficient in terms of energy production thanks to a trigeneration plant (electricity, hot and cold water) powered by natural gas. The technological innovations that have made history not only in Ferrari but in the world automotive industry as a whole are also featured. These include transmissions system evolutions ranging from the introduction of the famous F1-style gearbox with steering wheel-mounted shifting paddles all the way to the FF’s 4RM four-wheel drive system. Also on display is a series of Ferrari’s high tech steering wheels with their growing cluster of controls, another example of the transfer of technology from the track to the road. Our racing heritage is represented by two Formula 1 single-seaters and a simulator in which visitors can experience the exhilaration of a fast lap of the Monza Circuit. 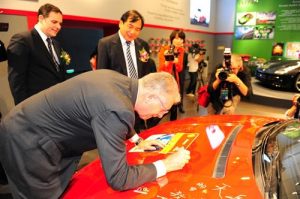 Since the first Ferrari came to the Chinese market in 1992, the Ferrari brand has greatly benefited from China’s economic success and the spectacular growth of its car market. In 2011, the Greater China region became Ferrari’s second-largest market worldwide with a total of 777 cars sold. Ferrari has already established a sales and service network in 15 major cities in mainland China that covers Shanghai, Beijing, Guangzhou, Shenzhen, Dalian, Qingdao, Hangzhou, Chengdu, Chongqing, Nanjing, Wuhan, Kunming, Xiamen, Wenzhou and Tianjin, and it is expected that this will expand further over the next two years.

Ferrari has also introduced a series of customer experience projects for Ferrari owners in China which include the Corso Pilota professional driving course, the Ferrari Owners’ Club and the Ferrari Asia Pacific Challenge. Since it officially began operating in China, Ferrari has also been involved in a number of goodwill projects. Projects have included collaborating with Jet Li’s One Foundation, Shanghay Charity Foundation and sponsoring students from the Tsinghua University to study in Italy.