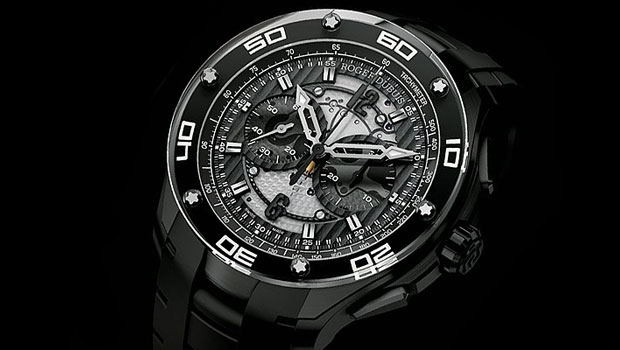 The Chronograph in the new Pulsion Collection from Roger Dubuis is in keeping with the image of the world of the Venturer from which it takes its inspiration: technological, powerful and dynamic. The Roger Dubuis Pulsion Chronograph is equipped with a black DLC titanium case and a rubber strap, it has been designed for action.

A distinguished feature of this collection, the sapphire crystal extends to the flanks of the case and serves as a bezel, while its numerals are engraved under the crystal and impregnated with luminescent material.

The Roger Dubuis Pulsion Chronograph plays the card of total transparency in order to show its technical prowess. With its partially openwork dial that reveals all the workmanship of its exclusive RD680 chronograph movement, it is instantly recognisable thanks to its sapphire crystal screwed directly onto the case. This revolutionary structure enables the Arabic numerals to be engraved under the crystal and to be impregnated with luminescent material. In addition to this distinguishing feature common to all the models in the Pulsion Collection, the Roger Dubuis Pulsion Chronograph is equipped with exceptional technical features. Its dial, constructed in various different levels and with a black exterior surface treated with Geneva ribbing, exhibits complex workmanship, exemplified by the numerals 12 and 6 machined into two mini-circles and screwed onto the surface.

The dynamic character of the Roger Dubuis Pulsion Chronograph designed for action is also shown by its black DLC titanium case with a 44 mm diameter. With alternating polished and satin-finished surfaces, it has a complex structure that emphasises its elegant power and the force of its design. Water-resistant to 10 bar (100 metres), its sturdy case houses a column-wheel movement designed, perfected and produced by the Roger Dubuis Manufacture. This mechanical chronograph movement with automatic micro-rotor winding, calibre RD680, represents the new generation of Roger Dubuis mechanical movements, combining aesthetic qualities and performance, and based on the most advanced production technology. The RD680 chronograph calibre includes 264 parts and has a power reserve of 48 hours for 28,800 vibrations per hour (4 Hz).

The Roger Dubuis Pulsion Chronograph is proposed with a black rubber strap featuring polished and satin finishings with a titanium folding buckle. Two models complete this collection, both of which are equipped with the RD680 chronograph movement and house the same case structure and the same polished and satin finishings. The first version is also proposed in titanium and has a light-coloured dial, while the second is presented in a pink gold case with a dark dial. Like all models produced by the Genevan watchmaker, the Roger Dubuis Pulsion Chronograph models comply with all the latest requirements for the “Poinçon de Genève”. This mark of quality, issued by the Canton of Geneva to a small number of manufacturers, represents an official guarantee that the watch and its functions operate correctly. It also certifies that its mechanical watch movement is made by hand, assembled and regulated in Geneva and that it complies with the strict requirements laid down for the watch manufacture. Roger Dubuis is the only watch Manufacture to produce 100% of its movements in accordance with the criteria of the “Poinçon de Genève”.