Bentley is delighted to announce that its pen partner Tibaldi has recently won the Most Exciting Motorsport Pen at Pen World’s 17th Annual Readers’ Choice Awards. 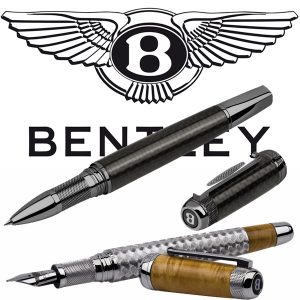 The Tibaldi for Bentley Mulsanne pen was chosen by readers because it was inspired by the roaring engines which are associated with the legendary straight and corner at the Le Mans circuit. The Readers’ Choice awards were presented in New York City and the complete list published in Pen World.

The Bentley Mulsanne embodies the challenges that honed the marque’s reputation. The flagship model reflects the masterpiece 1930 8-litre vehicle owned by W.O. Bentley himself. The 8-litre defines the heart and soul of the Mulsanne, which was designed, engineered and built entirely in the company’s headquarters in Crewe in a state-of-the-art manufacturing facility. The Mulsanne is the pinnacle of Bentley motoring – like its ancestor, a true grand tourer.

As interpreted by Tibaldi, the Tibaldi for Bentley Mulsanne pens marry two traditions, two aesthetics. Now an established family of writing instruments for connoisseurs, the pens fashioned by the Italian maker for the world’s leading maker of luxury cars employ the proportions and patented technologies of Tibaldi, with the forms and details prescribed by the cars they honour.

Giuseppe Aquila, Tibaldi CEO, says: “The greatest challenge when developing these extraordinary pens has been the production of the wood components, which were designed to match the interior of this outstanding new car.”

To capture the essence of the Bentley Mulsanne, Tibaldi has fashioned a series of writing instruments that communicate the feel of the car in a piece of functional, hand-held sculpture. Fingers holding the Mulsanne will make contact with knurled bands, the surface matched on the pocket clip, echoing the design of Bentley switchgear. The pen is topped with a Bentley emblem which recalls the vehicle’s starter button. And every pen adheres to Tibaldi’s respect for the Divine Proportion, the ratio between the pen’s cap and the visible portion of the barrel when the pen is closed, equalling the ratio of 1.618.

There are three finishes with their caps and barrels accented in one of the three woods found in the cars themselves: Dark Stained Vavona, Burr Oak and Burr Walnut.