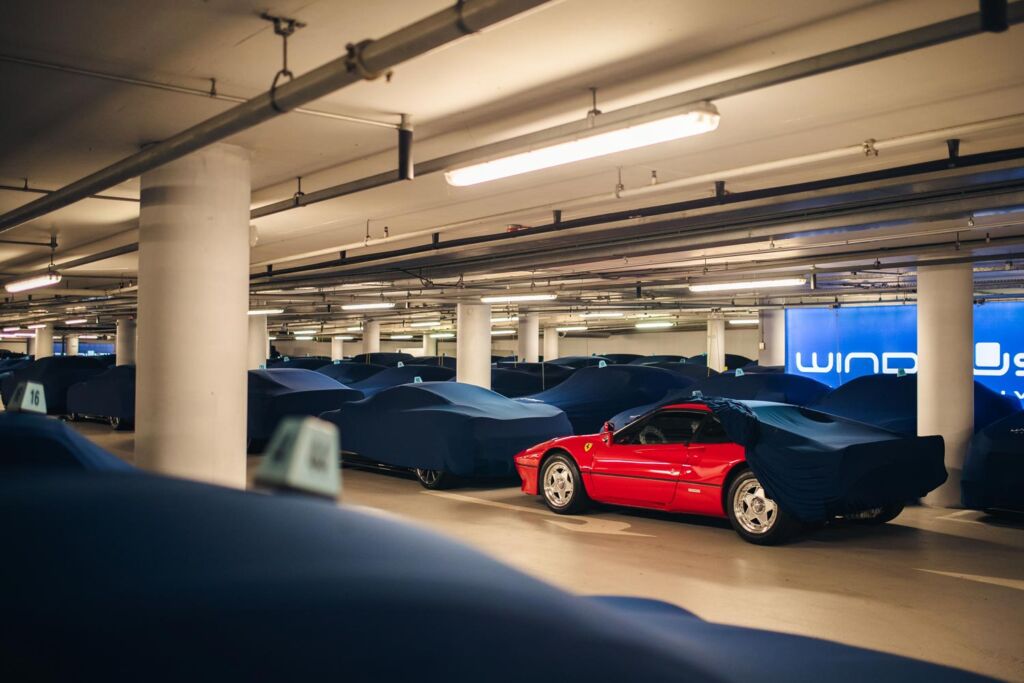 When the F1 Circus moves from country to country, deadlines have to be met, and obstacles overcome. Like a swan heading upstream, there is a lot of hard work taking place, but the onlooker can only see serenity. We meet with Ex-F1 logistics director Tim Earnshaw to learn how life in F1 inspired the launch of Windrush Car Storage.

It’s easy to watch the latest Formula 1 race without so much as a thought as to what happens next. Few consider the whole F1 roadshow has to be physically moved from one city (or continent) to another, even fewer of us appreciate the herculean effort required to do so.

It’s expected that cars and drivers have to arrive at the next circuit on time, but a high-ranking Formula 1 team will also have hospitality units, Michelin-level kitchens, power generators, computers, tech systems, fresh food and all manner of sundries that require transportation. 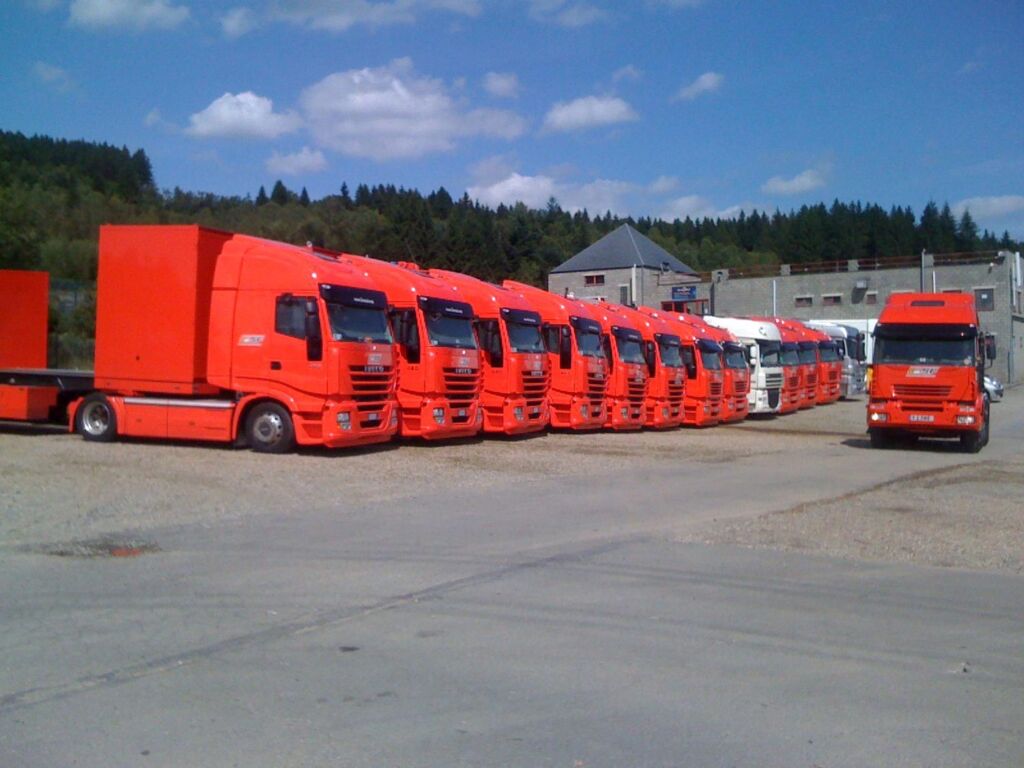 Everything that is needed to keep a car on the track, a driver-focused, and an army of guests, press and crew entertained has to be carried on a fleet of heavily polished trucks, and the time given to dismantle and reassemble can be as little as just one week.

There can be no excuses, and ‘sorry we are stuck in traffic’ doesn’t cut it. The road crew has to overcome any obstacles they might encounter, and every piece of equipment has to be pristinely clean and triple checked. Nothing is left to chance. 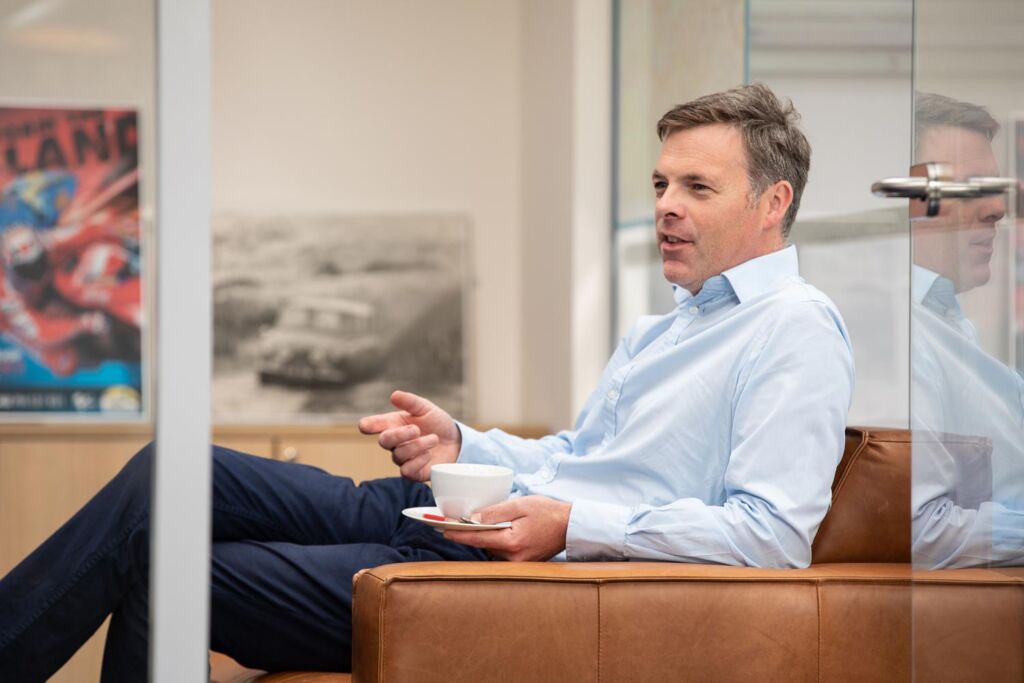 Tim Earnshaw was in charge of moving the Marlboro F1 team between 2004 and 2009. The buck stopped with him, and if there was a problem, a team of people looked in his direction for a solution.

“Imagine driving between countries non-stop, with a driver change every 4-hours to comply with legalities.” Tim told us, “Now consider the fact each driver had to pack up 16 HGV trucks before undertaking that drive, and once we reached our destination, every truck had to be cleaned to ‘as new’ condition. Its physically and mentally exhausting.”

To set up a team village in the paddock takes 36 solid hours of work, and those that come into F1 for the glamour rarely last. 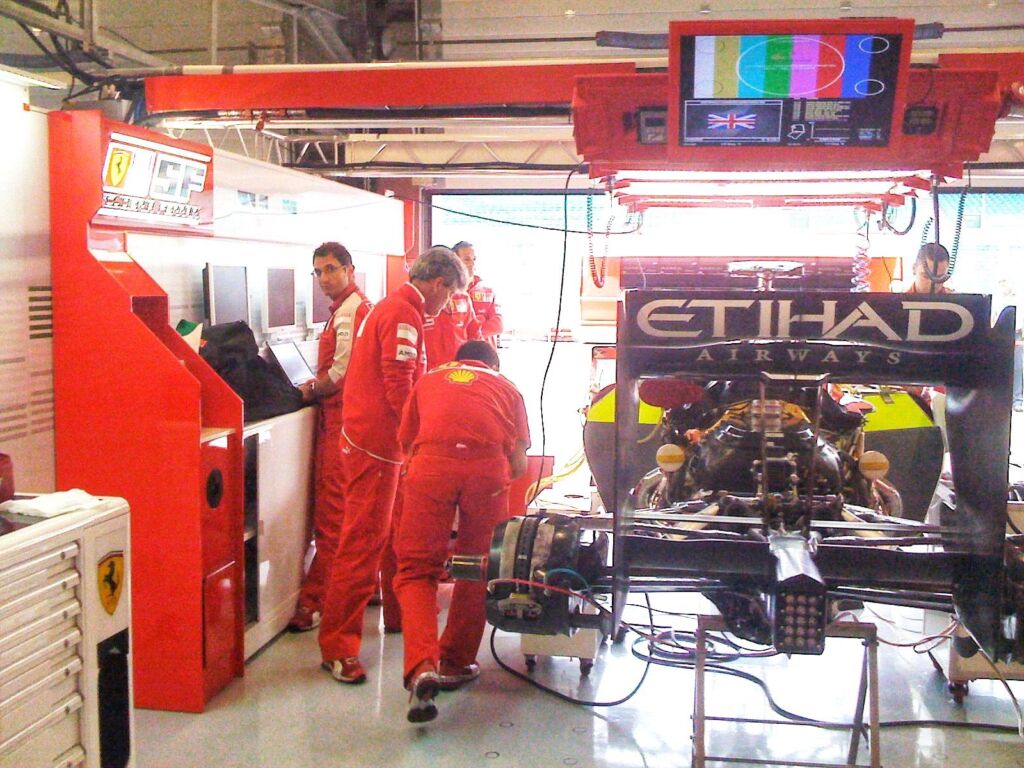 “The hours are long, and the work is hard” confirms Tim “and even when the race is on, we aren’t watching. Instead, we are ensuring everything is going to plan, and our bosses are happy. We may grab a quick bite to eat, but that is taken out of sight, when time allows, and it certainly wasn’t prepared by a Michelin-level chef.”

One wonders how you prepare for a move of that magnitude on a weekly basis and guarantee that everything will go to plan? Tim tells us that it takes a small army to make it happen.

“We had a huge amount of personnel on the ground, 30 just to drive the trucks. Each member of the team needs feeding, access to expenses, a bed to sleep in, a flight out and home again…the logistics are vast, and the costs are high.” But that’s not the only challenge which Tim had to face “We had road closures, extreme weather, punctures and illness to contend with, but whatever the problem a solution has to be found within seconds.”

“The only way to overcome potential issues is to ensure every possibility has been considered and calculated months before you leave. We stripped and serviced generators even if they hadn’t been used. We had multiple route options to reach our destination, and we had back up staff and equipment ready to go should the worst happen. It may seem incredible to say, but every move was planned with the level of detail expected from a military operation.”

Some of you may be thinking that it sounds like an awful lot of fuss to enable a few cars to race around a track, and it is, but it shows the powerhouse that the Formula 1 multi-million business has become. Consider it a different way, the efforts of the (relative) few provide enjoyment and passion for millions.

Even if you are an avid viewer and motorsport fan, you may be surprised at the efforts involved, but the repetitive, meticulous detail heightens the experience of the racing fan watching on TV, delights racegoers and impresses invited guests. 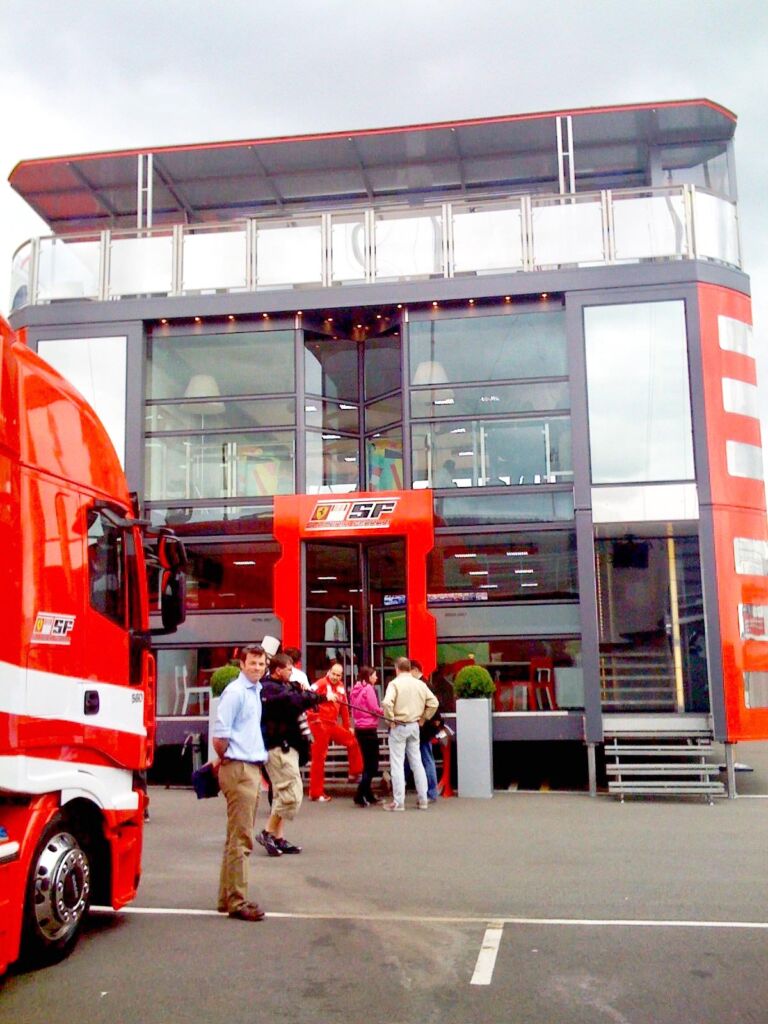 For the team, it inspires confidence and provides familiarity with a sense of being at home. Wherever in the world a team may be, everything they need is exactly where they expect it to be. Press a button, and it works, invite a VIP guest inside, and the coffee will be hot and the champagne cold. The chef can prepare world-class food, and the team knows that everything is perfect.

This peace of mind inspires confidence, provides the ability to do a job well, and lets drivers worry only about the race. It comes with the territory that, while most of the team are able to settle, the logistics crew remains on high alert until the race is well and truly over. If the Champagne fridge fails, there will be hell to pay.

“I had to provide the highest levels of service and detail in unfamiliar places for five years,” says Tim “I was already a fastidious individual, but after F1 I am now a detail addict, and everything has to be right. Even if something is hidden from view, it has to be perfect, I do not cut corners, and no stone is left unturned.

My mindset will not allow me to leave a problem unsolved. Winning teams cannot leave things to chance or wait for someone else to do it, and I can still perform well on little sleep. Basically, I do not miss a thing.”

Harnessing a burning desire for perfection after leaving Formula 1 is hard. Tim tells us that accepting second best in anything is difficult after striving for perfection for so long.

“The effort required to go from good to exceptional can be great, but if you constantly strive to be better, to always say yes to any given question, then it allows you to continuously delight your customer regardless of the business you are in.” 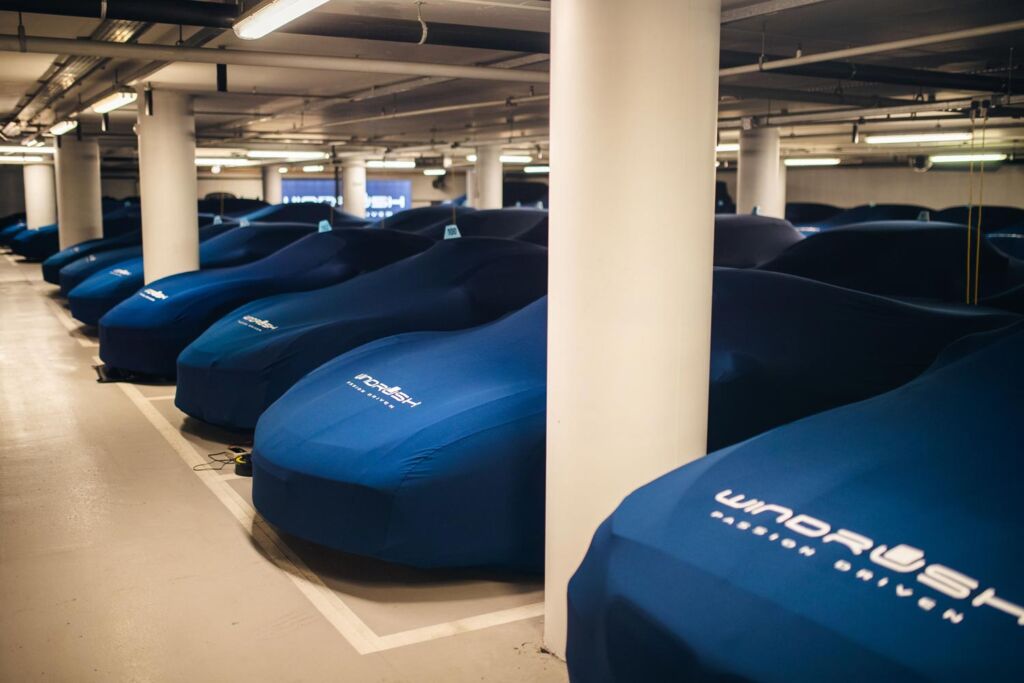 It’s plain to see that Tim has put his passion for perfection to good use at his company, Windrush Car Storage. We held our conversation in his meticulously clean facility deep in the Cotswolds countryside, sat surrounded by supercar silhouettes to a vanishing point, attention occasionally diverted from Tim’s story as a familiar supercar outline caught the eye.

Tim was always going to remain in automotive, as he is a car enthusiast to the core, the plain exterior walls of his sprawling business hiding a hive of activity as the Windrush Car Storage team cleans, checks, and cares for a variety of vehicles ranging from humble classics to supercar rarities. 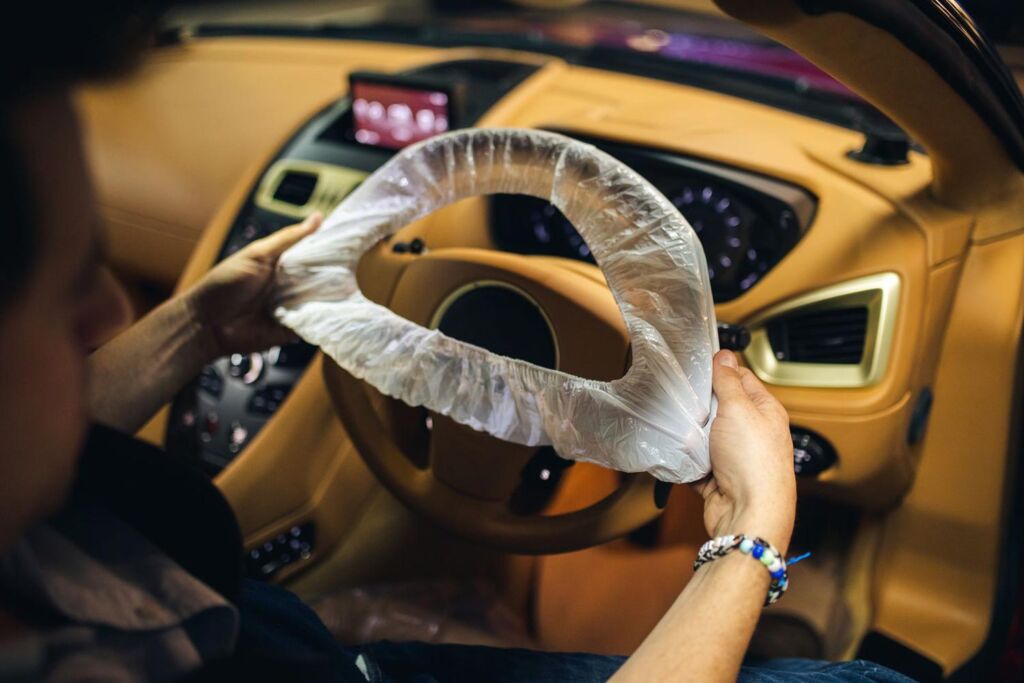 Rather than simply park the cars and leave them, these cars are treated like royalty and receive the highest levels of care. There is even a rolling-road to allow long-term storage cars to ‘go for a drive’ (helping to keep the mechanicals in good order) without having to leave their humidity and temperature-controlled environment. 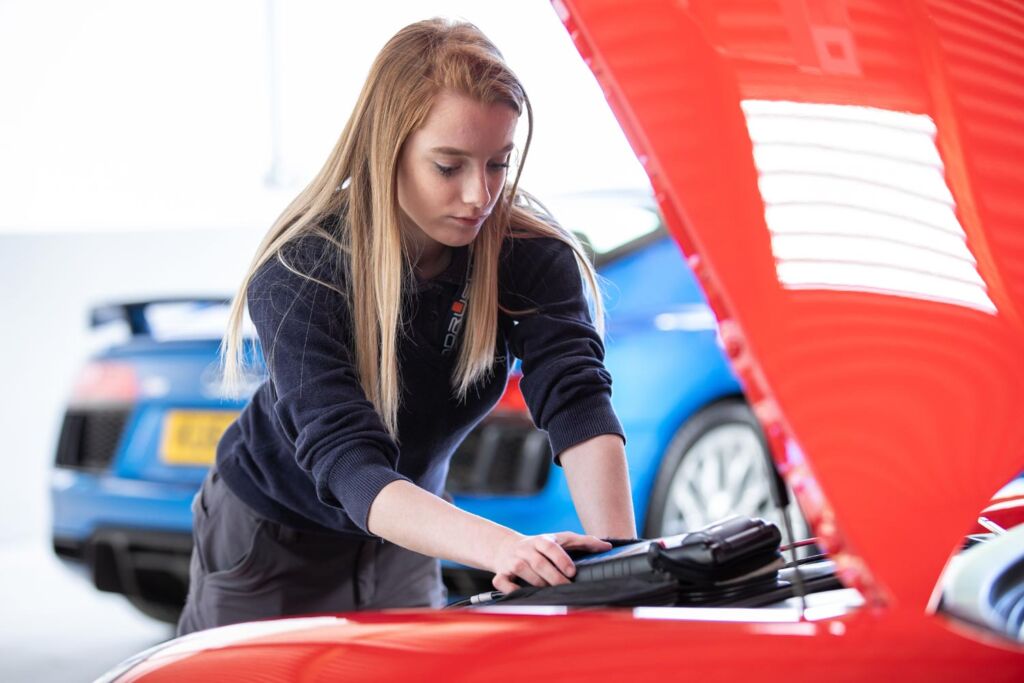 “The principles at Windrush are the same as in Formula 1” Tim advises. “We are in the business of making people happy, and that means being the best. Inspect our premises, and you won’t find anything amiss. We work hard to ensure problems don’t arise, and we work tirelessly to overdeliver on every level. In the rare eventuality of a client issue, we solve it swiftly, without question or inconvenience. Absolutely nothing is left to chance.”

A stroll around the sprawling premises confirms that, and the same methods are exactly replicated at Windrush’s second facility in central London, where hundreds of cars are kept inside a secret, secure location. Every car is covered in the same branded blue cover, the floor is surgically clean, and the silence is deafening.

As we walk from room to room, the temperature remains constant, and the staff move around purposefully attending to the cars as a doctor might on morning rounds. Tim encourages me to inspect every corner of his facility and, acting like a drill sergeant on inspection; I can’t find anything that is out of place, a spec of dirt or a piece of misplaced paperwork. 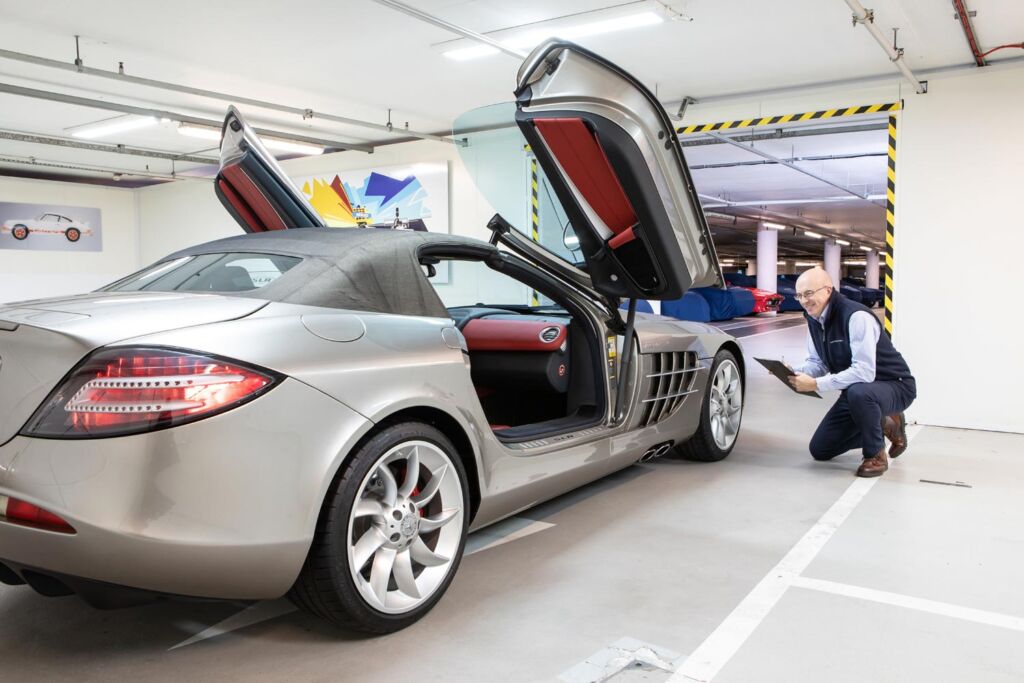 “There’s no need to do some of what we do” admits Tim. ‘We don’t need to clean the cars to perfection when they arrive, and again when they leave. We don’t need to send owners photos of their car so they can see how it’s doing, and we don’t need to check cars daily or make sure they all have the same allocated amount of space, but when you deliver the highest levels of service, you have to ensure every possible detail is taken care of to guarantee the best possible outcomes.”

As we concluded our chat, over identical-looking cappuccinos…details matter, it was clear to see how life on the road with Formula 1 has had an impact on Tim. As with many disciplines in life, an individual soon becomes accustomed to a particular way of life and what seems unnatural at first becomes second nature over time. Whatever you think of Formula 1, it is a way of life for those who work within it and instils a sense of pride and an eye for detail that is unsurpassed. 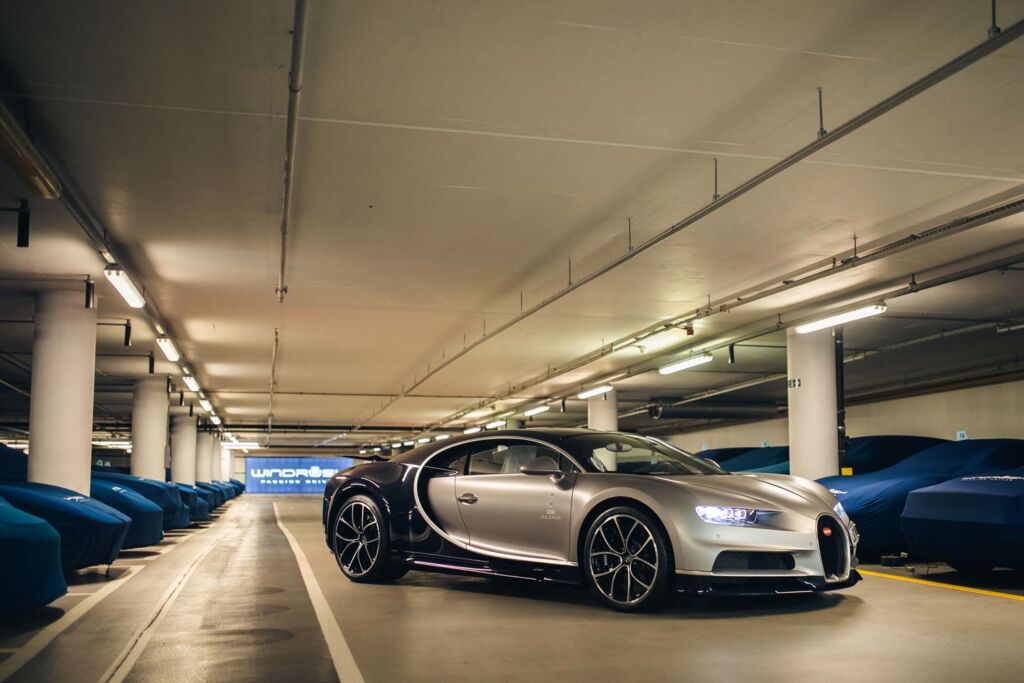 While that life won’t suit us all, it feels comfortable to many, and Tim is a prime example of that. His F1 days may be in the past, but Windrush, under his watchful eye, provides perfection and unrivalled attention to detail to those of us who care as much for our road cars as an F1 team boss does for his racers.

Windrush Car Storage – Where and how?

Windrush Car Storage has facilities in Central London (W12) and in the Cotswolds (GL54). For more information on the 24/7 services, please visit their official website www.windrushcarstorage.co.uk.