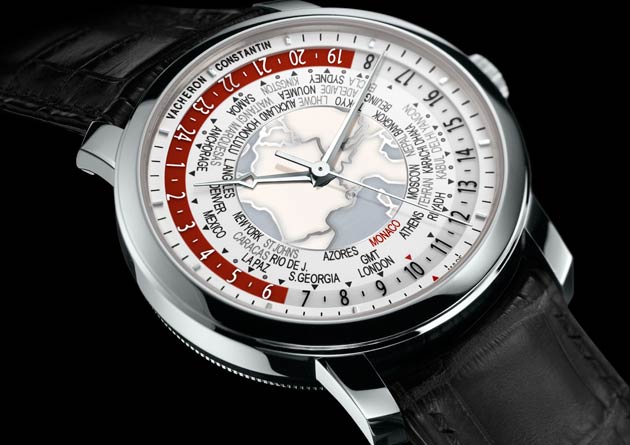 Vacheron Constantin, the legendary Swiss watchmaker has produced a unique Patrimony Traditionnelle World Time model for the Only Watch 2013 charity auction. The dial of the watch pays tribute to three outstanding crafts, synonymous with the brand, engraving, enamelling and gem-setting.

Inseparably bound up with the Vacheron Constantin heritage, the World Time complication had made a major comeback in the collection of the Manufacture in 2011 with the Patrimony Traditionnelle World Time model driven by a new in-house made movement, Calibre 2460 WT. It now returns as the Patrimony Traditionnelle World Time “Only Watch” model available in a 42.5 mm-diameter 950 platinum case featuring an exhibition case and water-resistant to 3 bar (around 30 metres). It is supplied with a saddle-stitched black alligator leather strap secured by a folding clasp.

The back of this unique Patrimony Traditionnelle World Time is engraved with the inscription “Only Watch 2013, Pièce unique”, a celebration of the Only Watch event organised by the Monaco Association against Muscular Dystrophy, a charity with which Vacheron Constantin is once again privileged to be associated with.

Building on its historical expertise in the realm of Artistic Crafts, Vacheron Constantin has called upon the most sophisticated current talents to give this timepiece a face combining ultimate artistic precision with contemporary elegance. The central gold associates a trilogy of excellence in the techniques of engraving, enamelling and gem-setting. The hand-engraved seas and the countries are coated with translucent and opalescent enamel, while the GMT reference city, Monaco, is immortalised by a round-cut diamond that is extremely difficult to set because of the extremely thin plate. Independent enamelling artist Anita Porchet, who is well known to collectors and connoisseurs of horological works of art, contributed her peerless skill to the successful crafting of this timepiece. 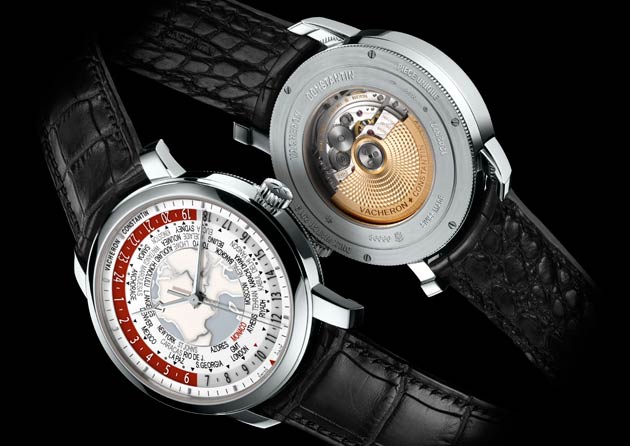 The World Time watch embodies the openness to the world characterising the Manufacture founded in 1755. For over 250 years, Vacheron Constantin has been crossing borders to spread the news of its precious timepieces. It has been active in the United States since 1832 and in China since 1845, well before the International Meridian Conference held in Washington in 1884 and which divided the world into 24 time zones while defining the zero meridian.

In 1932, Vacheron Constantin introduced an original watch featuring a world time mechanism. It marked the first chapter in a long story of developments of the world time complication, sometimes also referred to as universal time or international time.

Eager to make a major new contribution to the history of this complication, the master-watchmakers and engineers of the Manufacture sought to create a mechanical movement capable not only of indicating full time zones, but also partial time zones, so as to reflect the precise temporal reality prevailing in 37 different zones of the world. This is because a number of countries have adopted a time that is a half-hour or a quarter-hour out of sync with UTC (Universal Coordinated Time). Calibre 2460 WT was specially developed and produced by Vacheron Constantin to take account of these special cases. This timepiece bears the prestigious Poinçon de Genève (Hallmark of Geneva), confirming the status of the Patrimony Traditionnelle World Time as a truly precious accessory for today’s keen travellers.

While complex in terms of its technical design, this mechanical movement beating at a frequency of 4 Hz (28,800 vibrations/hour) and endowed with an approximately 40-hour time zone, remains pleasantly simple to use, even through the 38 time-zone indication is as complete as they come. All adjustments are made via the crown of the watch – an exceptional feature on a multiple time-zone watch. The owner of the timepiece chooses the reference city by placing it facing the red triangle at 6 o’clock. The time in the reference location may thus be read off either via the hours hand of the watch, or on the 24-hour disc. The time in any of the 36 other time zones may be read off simultaneously. The cities appearing in black represent the complete time zones, while the grey cities indicate half-hour or quarter-hour time zones. The day/night indication is symbolised by the 24-hour disc, with the night shown in red and the day in white.